The NFL's most improved pass-rushing defenses in 2019

Last week, we looked at the most improved offensive lines after April’s draft, and now we turn our attention to the other side of the ball. It was one of the deepest defensive line classes in recent memory with 12 such players being taken in the first round. Surprisingly, not a single team in the league doubled up at the position over the first two rounds of the draft. These are the teams, though, that we felt still came away with the most impactful haul year one.

Quinnen Williams is enough alone to put the Jets onto this list, but the addition of Jachai Polite in the third gives their defensive line a brand new look in 2019. Both should be penciled into immediate playing time up front and while Polite may be more of a work in progress, Williams looks primed to hit the ground running. The Alabama defensive tackle earned the highest overall grade we’ve ever given to a defensive tackle in our five seasons of grading college football. He not only had the highest run-defense grade at the position in 2018 (96.5), but he also the highest pass-rushing grade (92.5). Add a 4.83-second 40 at 303 pounds on top of that, and Williams should be one of the league’s most disruptive interior forces sooner rather than later.

The Panthers got one of the steals of the first round when Brian Burns fell into their laps at number 16 overall. The Florida State edge defender checked in at 14th on PFF’s draft board after he led the nation in pressures during the regular season (FSU didn’t make a bowl). He’s a long, lean edge rusher who still needs to add a bull-rush to his repertoire of pass-rushing moves. After seeing the kind of jump he made from sophomore to junior year, though, we’re confident he can get there. Burns went from a 73.6 pass-rushing grade in 2017 to a 90.5 last season after adding 15-plus pounds of muscle to his frame.

The Panthers later added Alabama edge defender Christian Miller to address a growing need at the position. The fourth-rounder had played all of 207 snaps in his Alabama career before notching 472 last season and earning an 80.3 overall grade. After preferring jumbo defensive ends for the better part of the last decade, the Panthers nabbed two speed rushers who both weighed in under 250 pounds at the combine. 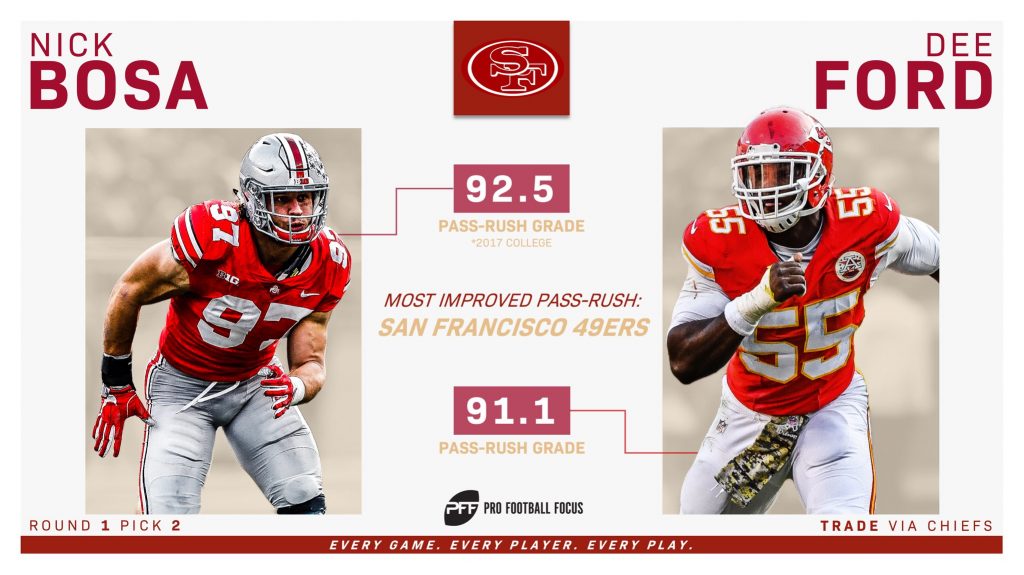 Similar to the reason why the Bengals made it for most improved offensive line, the 49ers appear here under most improved pass-rush. They didn’t add another defensive lineman outside of Nick Bosa; it’s just that Bosa is that good.

The comparisons to his brother Joey are too eerie not to bring up. Not only are their testing and grading numbers almost identical as you can see above, but they also move the exact same way.

Both utilize the side-scissors pass-rushing move with immense repeated success (I dare any non-Ohio State fan to tell me which Joey and which is Nick in the clips below).

The upshot is that Joey hit the ground running with double-digit sacks and an 86.6 overall grade as a rookie. If Nick can do the same, the 49ers will have transformed one of the league’s worst pass-rushes in 2018 to one of the best in 2019 over the course of the offseason.