Kendall Fuller had a good season in 2018, finishing the year ranked 29th out of 86 cornerbacks who saw at least 500 defensive snaps with a 71.7 overall grade. The third-year pro graded north of 70.0 in both coverage (70.2, 32nd among cornerbacks) and run defense (74.0, 25th), and he achieved that while tallying the fourth-highest regular-season snap count among all corners, seeing the field for 1,078 defensive snaps.

Labeling his 2018 season as a bad one would be far from the truth, but there’s no denying this: Fuller's 2017 season showed us he’s capable of playing at an elite level, a level he didn't quite play to during his inaugural season with the Kansas City Chiefs.

Fuller finished the 2017 season ranked second out of 92 qualifying cornerbacks with an elite 90.6 overall grade, and at 91.2, he was one of just four cornerbacks to break the 90.0 threshold in terms of coverage grade. In 2017, Fuller ranked fourth among cornerbacks with 21 stops in coverage, he ranked third by surrendering a first down or touchdown on just 20.0% of the targets into his coverage and the 49.6 passer rating he surrendered into his coverage was the fifth-lowest among corners.

In 2018, he tallied one fewer coverage stop (20) despite being on the field for 186 more coverage snaps than he was in 2017, and he ranked 49th among corners by surrendering a first down or touchdown on 36.0% of the targets into his coverage to go with an 86.4 passer rating allowed which ranked 38th. 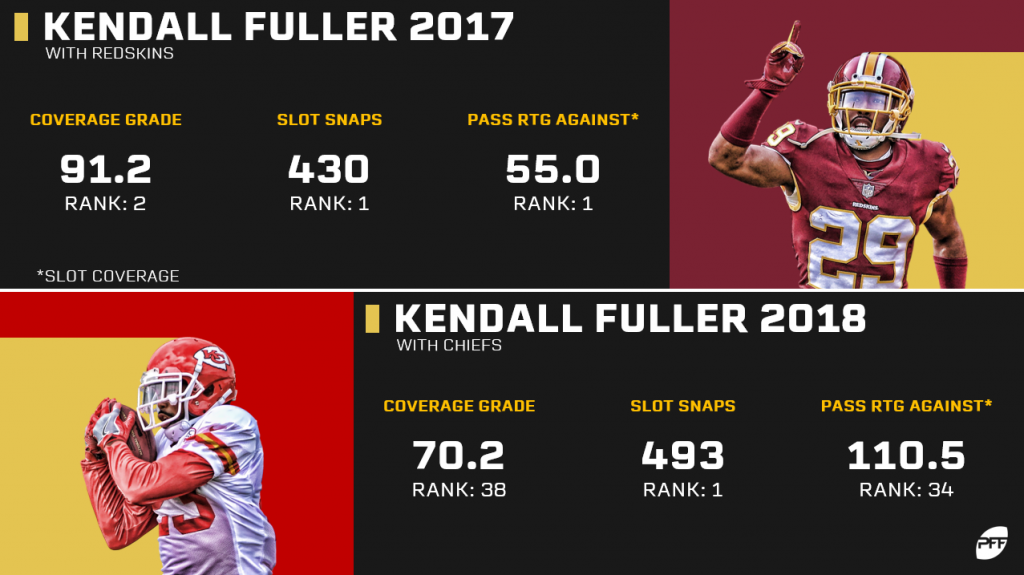 With both the Chiefs last season and the Washington Redskins in 2017, Fuller primarily played out of the slot, lining up as a slot corner on 70% of his defensive snaps in 2018 after playing from the slot on 88% of his defensive snaps the year before. He’s one of just four players to register at least 400 coverage snaps from the slot cornerback position in each of the last two seasons.

In 2017, Fuller ranked first out of seven players who logged at least 400 coverage snaps out of the slot with a 90.2 slot coverage grade. Among the 16 players who saw at least 50 slot targets, he ranked third by allowing just a 55.6% completion percentage, and he ranked fourth by forcing an incompletion on 14.3% of the targets. He gave up either a first down or a touchdown on just 20.6% of the targets, which led the group by a landslide (the second-best rate surrendered by anyone in that group of seven was 25.0%) and the 55.0 passer rating he surrendered to opposing quarterbacks was also the lowest by far.

Despite his struggles from the slot in 2018, Fuller shined in coverage when he was given the opportunity to cover out wide. The third-year cornerback registered 103 coverage snaps from an outside corner position, and out of the 101 players who saw at least 100 coverage snaps out wide, he ranked first with a 90.7 coverage grade. He ranked first among that group by holding opposing quarterbacks to just a 35.3% completion percentage when targeted as a wide corner and both of his interceptions came when playing out wide.

The 2019 season is going to be a big one for Fuller with him set to hit free agency following the season. Can he get back to playing at the elite level we saw him at during his second NFL season? And if he does get back up to that level, will it be from the slot? Or will we see him transition to more of a full-time role on the outside? Only time will tell for the talented cornerback who's set for a big role in the Chiefs' secondary in 2019.