The 2018 NFL season: The year of the pass-blocking right tackle

It’s been over six years since Senior Analyst Steve Palazzolo released his groundbreaking work on the value of left tackles vs. right tackles, but even now, the bias towards the men on the left is a league-wide epidemic. As things currently stand, the average yearly salary for a right tackle still falls considerably short of that of their counterparts on the opposite end of the offensive line, even though the demand for dominant pass-blockers — regardless of position — is at an all-time high. Instead of appreciating the dominant right tackles for what they are, the attention is often turned away from them and on to those on the left, even when those left tackles fall well below the standard of their right-sided teammates.

As it turns out, the 2018 season was an important one for those often-overlooked right tackles. Of the 20 highest-graded players at the position last year, seven played the majority of their snaps on the right side of the offensive line, the first time since 2009 that at least seven right tackles broke into the top 20.

But as good as those seven players were overall, there were three players at the position last year who, in a time when passing the ball is more valuable than ever before, distanced themselves from the players that have come before them in terms of pass blocking. Over the last 13 seasons, there have been 409 instances where an offensive tackle played 300 or more pass-blocking snaps over a season at a right tackle, and among that group, three players from the 2018 season cracked the top 10 in terms of pass-blocking grade.

Today, we'll pay homage to those right tackles for ranking among — and even beating — some of the best pass-protecting right tackles to ever play the game. 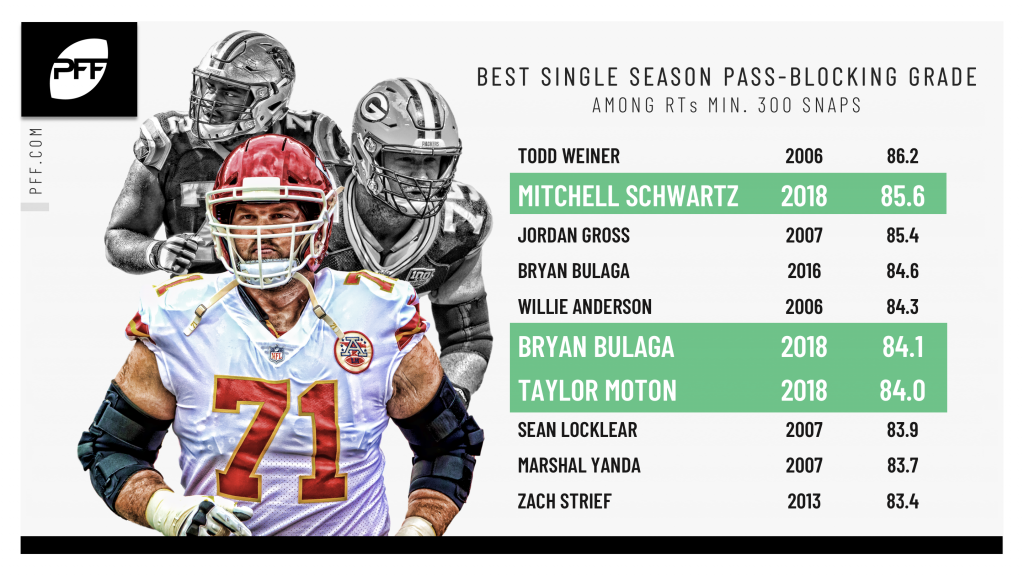 There really is no better pass-protecting right tackle in the NFL right now than Kansas City's Mitchell Schwartz, who just last season took home PFF's Matthews Award for the best offensive lineman in the league. In 2018, including the postseason, Schwartz allowed only four sacks, eight hits and 14 hurries from his 724 pass-blocking snaps at Kansas City’s right tackle spot, and his 85.6 pass-blocking grade on those snaps didn’t just pace the league’s right tackles in 2018, it was the second-best single-season mark ever recorded by a player with at least 300 snaps played at right tackle.

Since 2006, there have been 392 instances where a right tackle has logged more than 300 pass-blocking snaps over the course of the season (409 instances when you include plays nullified by penalty), and among that list, Schwartz's 3.6% pressure rate allowed ranks tied for 11th and his 4.1% loss rate is tied for 12th.

In fact, Schwartz allowed fewer than three total pressures in 15 of his 18 games last year; it was a season that is more than deserving of the praise.

Left tackle David Bakhtiari’s historically good performances have set right tackle Bryan Bulaga in somewhat of a shadow, but the reality is that Bulaga remains as one of the better offensive tackles in the game. A season ago, the Packers right tackle allowed five sacks, three hits and 14 hurries from 559 pass-blocking snaps, and he earned pass-blocking grades of at least 70.0 in 11 of his 14 games. Bulaga’s work at the right tackle spot in 2018 earned a pass-blocking grade of 84.1 — the sixth-best mark ever recorded by a player with at least 300 snaps played at right tackle.

Bulaga's stellar year in pass protection was highlighted by a simply outstanding three-game stretch to close out his season. In his final three games against the Cardinals, Jets and Lions, the Packers right tackle played 131 pass-blocking snaps, and he didn't allow a single pressure. In fact, he finished the 2018 season having gone 136 straight pass blocks without allowing a pressure, which was the longest streak for all offensive linemen outside of centers.

Things looked bleak for the Carolina Panthers' offensive line at the start of the 2018 season. But after losing both Daryl Williams and Matt Kalil early on, sophomore swing tackle Taylor Moton was thrust into the lineup on the right side — and he shined.

After playing all of 70 snaps as a rookie in 2017, Moton went on to play 1,054 snaps in 2018, with 594 of those snaps coming in pass protection at right tackle. He allowed just two sacks, one hit and 24 hurries and ended the 2018 season tied for fourth among the 30 right tackles who played at least 300 pass-blocking snaps with a pass-blocking efficiency of 97.6.

Despite playing limited snaps before his 2018 season, Moton showed a kind of consistency that teams all over the league strive for. He never allowed more than four pressures in a game, and he recorded pass-blocking grades above 80.0 in seven of his 16 contests, but it was his ability to keep his quarterback upright that truly stood out. Among the aforementioned 392 instances where a right tackle has logged more than 300 pass-blocking snaps over the course of the season, Moton's 198.0 pass-blocking snacks per knockdown (hit or sack) allowed ranks fifth.

Dotson's run-blocking left a lot to be desired last year, but his work in pass protection was as solid as ever. The Bucs right tackle allowed two sacks, two hits and 21 hurries from his 663 pass-blocking snaps; his 3.8% pressure rate allowed ranks 15th among the list of 392 qualifiers, while his 165.8 pass blocks per knockdown rank 11th. Dotson's single-season pass-blocking grade of 79.5 is good for 32nd on the list of right tackles who played at least 300 pass-blocking snaps over a season, narrowly beaten by Demar Dotson in 2017 (79.6, 31st) and Demar Dotson in 2014 (80.0, 30th).

Massie put forth a career year in Chicago in 2018, recording career-high marks in pass-blocking grade (78.9 — the first time he eclipsed 70.0), snaps played (1,134) and pressures allowed (26). In total, he allowed one sack, two hits and 23 hurries; his 210.7 pass blocks per knockdown in allowed in 2018 ranks fourth among the qualifying right tackles in the PFF era, while his 78.8 pass-blocking grade at right tackle ranked 39th.