From 2013 to 2017, the Cowboys’ offensive line earned the league’s fourth-best team pass-blocking grade (87.6) and the league’s second-best team run-blocking grade (90.9) — they were the only team to record top-five marks in both disciplines over that span — and while there is no question that production is thanks to all members of a line that also included star left tackle Tyron Smith and the perennially excellent right guard Zack Martin, the 2018 season proved beyond doubt that center Travis Frederick is the anchor that keeps Dallas' once-feared unit in place.

DOING HIS BIT IN PASS PROTECTION 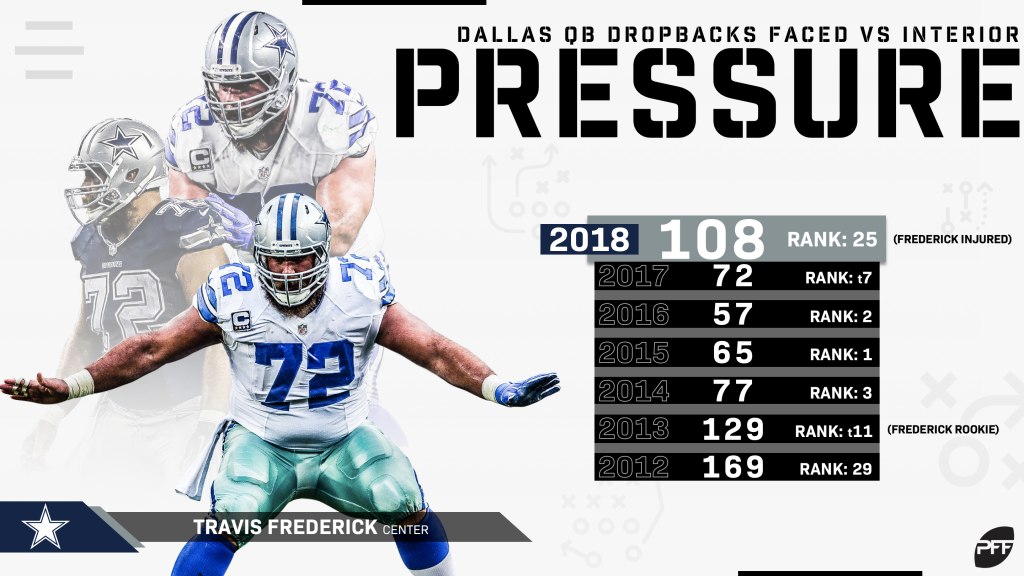 With the exception of his rookie season, the former Wisconsin Badger has recorded single-season pass-blocking grades above 79.0 in every year of his career, and he hasn't given up more than 15 total quarterback pressures in a season since 2014. Frederick finished in the top-10 among centers in pass-blocking efficiency in four of his five years in the league, and amazingly, he hasn't surrendered a sack since Week 9 of the 2014 season.

In fact, it's been 2,008 pass-blocking snaps since Frederick last allowed a sack, which is the longest streak that we've ever seen from a player in the PFF era (2006 – present).

A master communicator with almost unparalleled physical strength at the point of attack, Frederick has been one of the league's best at fending off even the trickiest defensive schemes. On his 424 pass-blocking snaps against stunts from 2014 to 2017, Frederick allowed zero sacks, one hit, 14 hurries and one additional “loss” (where the opposing pass-rusher was able to beat Frederick's block but unable to generate pressure). His corresponding loss rate — (pressures allowed+losses)/pass-blocking snaps — of 3.8% on his snaps against stunts ranks third among the 31 centers with at least 200 snaps against defensive stunts in that span, while his 82.5 pass-blocking grade on such plays ranks fifth among that same group of players.

His impact on the Cowboys' interior offensive line — and the offensive line in general — is plain for all to see when we look back at the number of dropbacks Dallas' quarterbacks have faced from interior pressure, pressure from pass-rushers who lined up between the tackles.

PAVING THE WAY FOR ZEKE 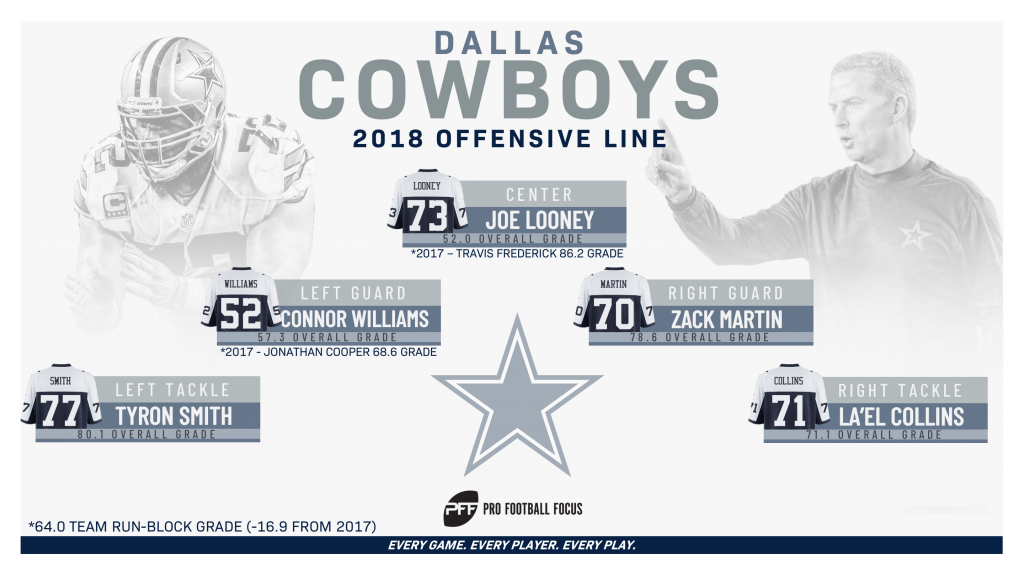 Frederick's work in pass protection has been stellar for the majority of his excellent career, but that's nothing compared to his work in the ground game.

In five years of pro-level play, Frederick has earned five consecutive run-blocking grades of 83.0 or higher, with his rookie mark of 91.5 being the fifth-best single-season mark ever recorded by a center. In 13 years of grading every player on every play of every game, Frederick and Jets great Nick Mangold are the only two centers in the PFF era to earn five consecutive single-season run-blocking grades north of 83.0.

Looking at his work across the last five regular seasons combined, Frederick’s five-year run-blocking grade of 93.2 ranks first among the 84 centers with at least 500 run-blocking snaps in that span, and his 7.1% impact run-block percentage ranks fourth among the same group of qualifiers.

After a season-long recovery, the reports out of Dallas are positive: The rehab is going well, and he is progressing through the team’s offseason program in preparation for the 2019 campaign. His consistency has been exemplary throughout his career, so if he is indeed back to full strength, there is no reason to think that he'll be anything other than his usual, dominant self for 2019.