Washington opened the scoring with a HB Chris Thompson touchdown catch from QB Kirk Cousins. They would follow that up with a TE Vernon Davis touchdown catch to go into halftime up 14-0.

The Raiders would get on the scoreboard in the second half, with a TE Jared Cook touchdown catch from QB Derek Carr. They would add a field goal in the fourth quarter, but a WR Josh Doctson touchdown catch and a pair of field goals would give Washington the win, 27-10. With that, we give you our PFF exclusive takeaways from the contest for each team.

Thompson showed what a forceful player he can be with the ball in space. Thompson gained 145 yards after the catch against the Raiders, as the Washington screen game was too much for the Raiders to handle. His 8.82 yards per route run was more than three yards higher than the next closest qualifying running back this week.

Cousins was at his best against the Raiders, completing 83.3 percent of his passes, however what made this possible was the dominant performance of the offensive line. Cousins was only pressured 6 times on 32 dropbacks as the offensive line allowed Cousins time to get into a rhythm. He had a perfect 158.3 passer rating when throwing from a clean pocket tonight.

Nicholson did not do much in run defense, but he also didn't need to as the Raiders ran the ball just 13 times on the night and had just one run of ten yards or more. However, Nicholson was impactful in coverage with just one target on 34 cover snaps, which he was able to pick off.

The entire offense had a bad night, but Derek Carr had his fair share of struggles. He forced the ball into coverage a handful of times, with two of those throws ending up as interceptions and he nearly had a third in the end zone late in the game. He completed just one of eight passes targeted 10-plus yards downfield, although his receivers did drop three passes on the night. He only had one pass thrown 20-plus yards down field, which he did not complete.

Cooper's struggles with drops continued Sunday night as he dropped one of his four targets. His six drops on the season are twice as many as the next wide receiver, and his drop rate currently sits at 37.5 percent for the season. Cooper's one catch against Washington went for just six yards.

Mack was able to record a sack and a hit but was held quiet for most of the game, however he still managed to make his presence known in the run game. The Washington tight ends in particular struggled to hold up to the strength and quickness of Mack. Mack recorded 4 stops in the run game on just 22 run snaps.

Since being discarded by Washington in 2015, Amerson has turned his career around in Oakland, going from a very poor 2014 campaign to being a much better player recently. In his return to Fed Ex field, Amerson did allow Josh Doctson to get the better of him on a jump ball down the sideline for a touchdown. However outside of that play, Amerson only allowed 28 yards on 3 receptions (on 7 targets) and knocked down 3 of the 4 incomplete passes to end the night with 80 yards allowed. 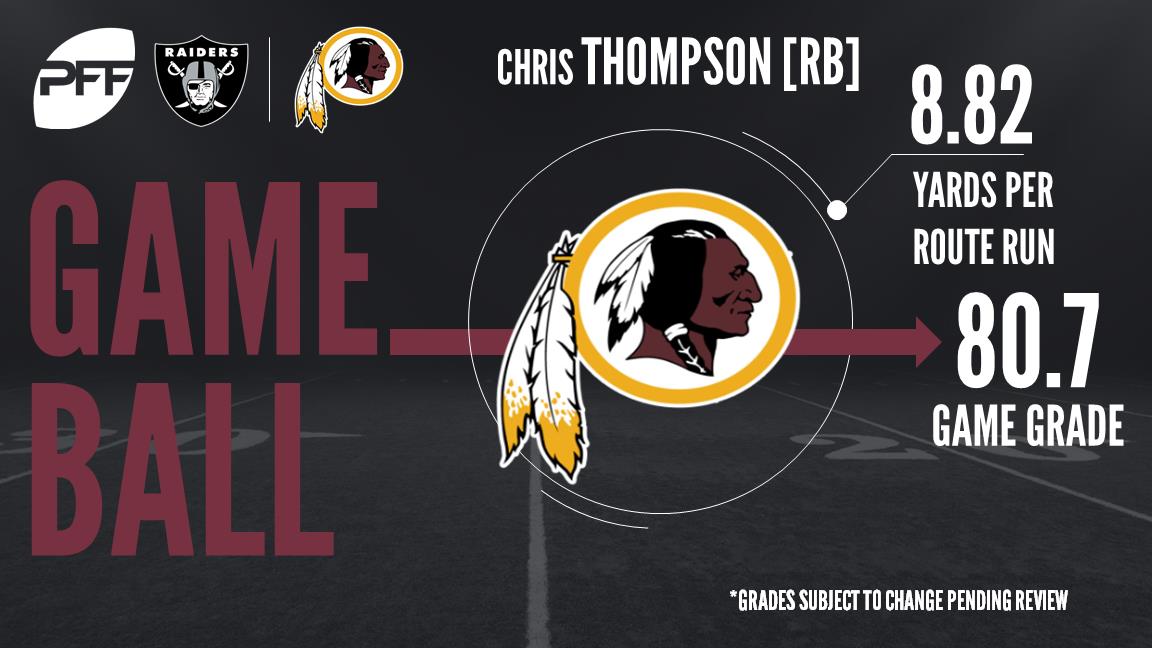