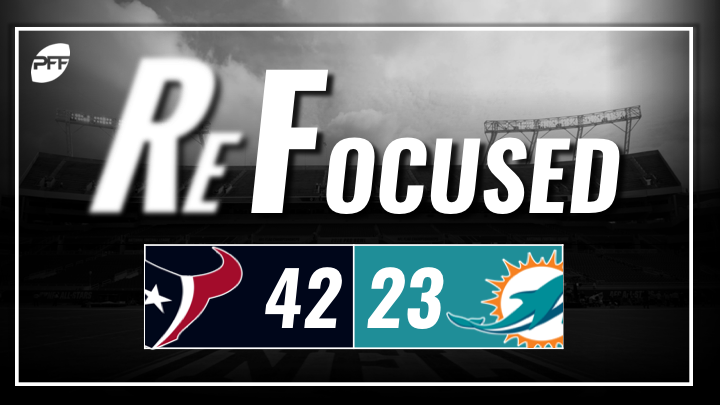 Wide receivers DeAndre Hopkins and Will Fuller put together impressive performances that featured several big plays. Hopkins had two touchdown catches, including a 49-yarder, while Fuller had a 73-yard catch-and-run for a score.

Deshaun Watson attempted just 20 passes in the game, his lowest mark of the season, but that didn't lessen his impact. One-quarter of his pass attempts went for a touchdown, and he kept the ball out of harm's way the entire night.

J.J. Watt opened the game like a shot out of a cannon with a batted pass, a sack and tackle for loss within the Dolphins' first 10 offensive snaps. The Dolphins struggled to slow him down from there, as he and the rest of the Houston defensive front found success against Miami's offensive line.

The Houston secondary shone for most of the night. While some may point to a few big plays that were given up, those busted coverages were actually on linebackers rather than the defensive backs. For much of the night, the Texans gave a soft cushion with two deep safeties and dared the Dolphins to throw downfield. Without the deep shot available to Brock Osweiler, he struggled to consistently beat the Texans secondary, which helped the Texans accumulate a big lead by the fourth quarter.

It was another lackluster performance from quarterback Brock Osweiler. Osweiler struggled with accuracy for most of the night and missed his fair share of open throws. After the Texans tied the game in the late first quarter, Osweiler threw a bad interception over the middle that resulted in great field position for the Texans, and a touchdown two plays later. Osweiler then had another turnover-worthy throw that bounced off the hands of a Texans defender and could have easily had a fumble, but it was controversially turned over after replay.

One positive takeaway the Dolphins can take from this poor Thursday night performance was the return of DeVante Parker. After sitting out with injuries, Parker was targeted often by Brock Osweiler, and he made the most of his opportunities. With so many smaller receivers on Miami's roster, Parker's frame will give the Dolphins quarterback more room for error in their accuracy than their other options.

It was a pretty abysmal outing for Miami's coverage defense. Whether it was busted coverages, penalties, or just getting flat out beat, they struggled all night long.

Cameron Wake made several plays in run defense and was able to get pressure on Watson a few times. Outside of that, the Dolphins' pass-rushers rarely affected Watson, with no sacks and maybe one hit throughout the entire game.

Houston: From the quarterback play, to the play of skill positions, to the play of the offensive line, the Texans put together an excellent, well-balanced performance that was going to be tough for any offense to match.

Miami: Of all the plays that happened on Thursday night, the most memorable for the Dolphins will be allowing the talented Texans receivers to run free in their secondary far too often. They gave up way too many big plays and were unable to stick with the speed of Fuller and Hopkins.