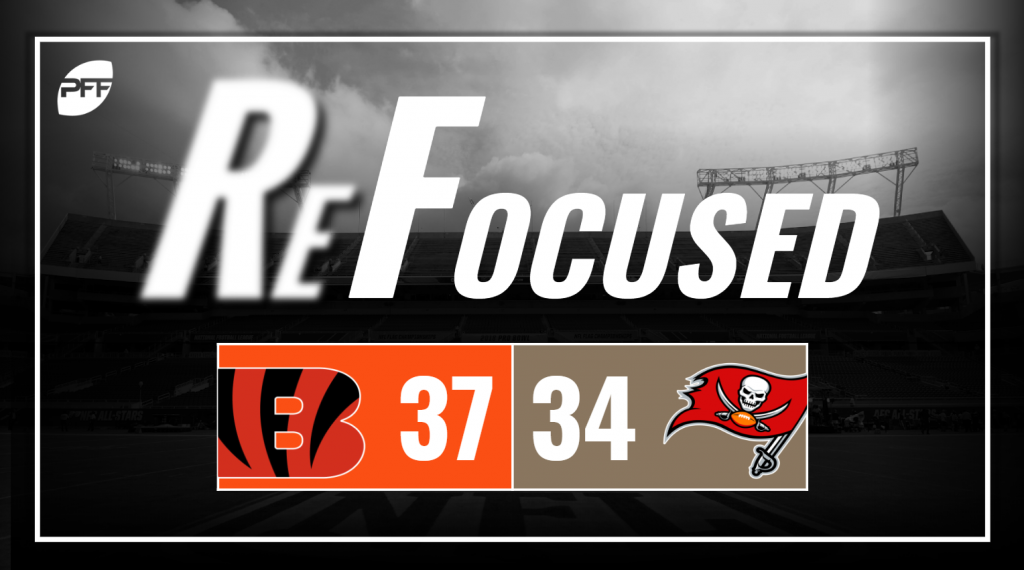 The Bengals' defensive line had the Bucs quarterbacks scrambling around often all day. Geno Atkins was a menace on the interior, picking up a handful of hurries while also winning a good amount of blocks that did not result in pressure. Atkins was also stout in run defense, proving very difficult to move for the Buccaneers blockers.

The Bengals had a hard time stopping the Bucs' offense, especially through the air. They were able to intercept four passes and dropped a couple more would-be interceptions but relied on a mistake by the Bucs in order to get off the field. Communication on the back-end was an issue, as they gave up two long touchdown passes due to a breakdown in coverage.

A.J. Green did A.J. Green things, but the difference for this Cincy passing attack has been the emergence of Tyler Boyd. After a quiet game last week at Kansas City, Boyd added yet another performance – fifth time in eight games – where he earned a receiving game grade of at least 72.1. Boyd collected eight-of-nine targets on the day for 129 yards and a touchdown on a seam route in the coverage of linebacker Adarius Taylor.

The Bengals will forgive running back Joe Mixon for a drop on a draw screen in the fourth quarter after racking up over 120 yards rushing and a pair of touchdown runs. Providing the dynamic ground attack missing when he was injured, Mixon found the end zone in the first quarter between the tackles and again on outside zone blocking for an eight-yard score in quarter two.

The Bucs collected three times as many sacks, nearly one-third more first downs, and twice as many third-down conversions as Cincinnati. However, the difference proved to come from Tampa Bay being flagged for more than twice the penalties as the Bengals, and the four interceptions sealed the deal.

It was a long day for Bengals tackles Bobby Hart and Cordy Glenn. Much of the nuisance causing the issues were from the efforts of edge defender Jason Pierre-Paul. Pierre-Paul beat Glenn on multiple occasions early and harassed Hart in the fourth quarter.

The magical Ryan Fitzpatrick came in and almost brought the Buccaneers to victory. FitzMagic was able to maneuver in the pocket well, buying time to find open receivers on multiple occasions. He also was accurate with the football and allowed his playmakers to do their jobs. Peyton Barber had a productive outing carrying the ball. Barber ran hard inside and displayed nice elusiveness making defenders miss in tight areas.

Jameis Winston had a rough outing throwing the ball, as he tossed four interceptions but could have been more if not for a couple dropped picks by defenders. Winston made some nice throws throughout the day, but it seemed like he followed up every nice play with a bad one. Winston saved the worst for last, forcing the ball down the seam on a play in which the safety jumped the throw as the initial coverage defender peeled off, resulting in a pick-six.

A combination of clutch passing from Dalton, outstanding performances from Boyd and Mixon and the ability of Green to break free on the final drive proved to be the difference.

Fitzpatrick made it exciting, but it wasn't quite enough to overcome the hole that Winston dug for the Bucs.