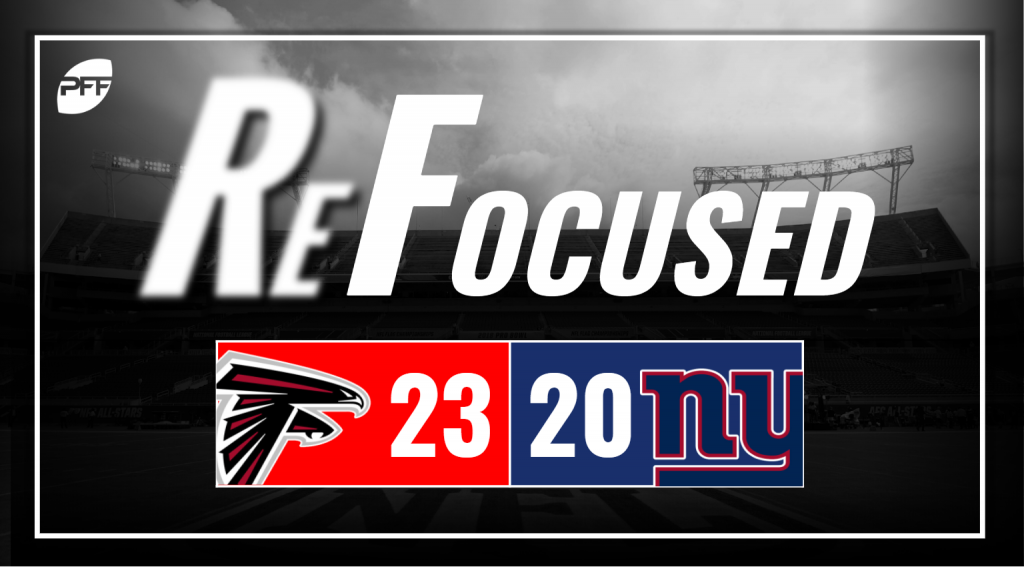 Brian Poole turned in a strong performance on the back end for the Falcons' secondary, recording multiple stops and allowing just one pass for an eight-yard loss in coverage.

Robert Alford didn't quite have the day Poole had against New York. He allowed multiple deep shots to go for big gains, including a fourth-quarter bomb down the sideline to Sterling Shepard that nearly got the Giants back in the game.

Matt Ryan was excellent on the night, turning in perhaps his best performance of the season. He rarely let the ball hit the turf, let alone put it in harm's way. Ryan did most of his damage underneath but was impressive when throwing the ball downfield when opportunities were there, most notably on back-to-back throws in the second quarter that resulted in a 47-yard touchdown to Marvin Hall.

A third-quarter fumble with the game still in striking distance was the lone blemish, but otherwise, it was another standout performance for Falcons' star wideout Julio Jones. He hauled in 9-of-12 targets for 104 yards, picking on just about everyone in the Giants' secondary in the process.

Odell Beckham Jr. had himself a day, and the Giants lost again — nothing's changed in New York. Beckham made multiple stellar catches and was a constant threat to make a big play all night long.

The Giants' replacement for Ereck Flowers, Chad Wheeler, hasn't been much better, and that was evident on Monday Night Football. Wheeler allowed multiple pressures and struggled in the run game for most of the contest.

For most of this game, New York's run defense was excellent. On 17 of 18 carries from Atlanta running backs, the Giants limited them to 2.1 yards per carry. That 18th carry, however, was a 30-yard touchdown run by Tevin Coleman on a third-and-one play midway through the fourth quarter that pushed the Falcons' lead to two scores and ultimately out of reach.

Pass-rush has been a problem for the Giants' defense throughout the season. After finding some success early in the game with three first-quarter sacks that helped New York force punts on Atlanta's first two drives, their ability to bother Ryan dwindled as the game went on, and he made them pay for it.

After getting off to a slow (for him) start to the season, Ryan appears to have found his groove over the past couple weeks, and his strong performance tonight led the charge for the Falcons.

Beckham Jr. couldn't do it all by himself, as the Giants lose another close game despite his strong efforts to drop to 1-6.