The Los Angeles Chargers defeated the Oakland Raiders, 26-10, in Week 5 of NFL action. 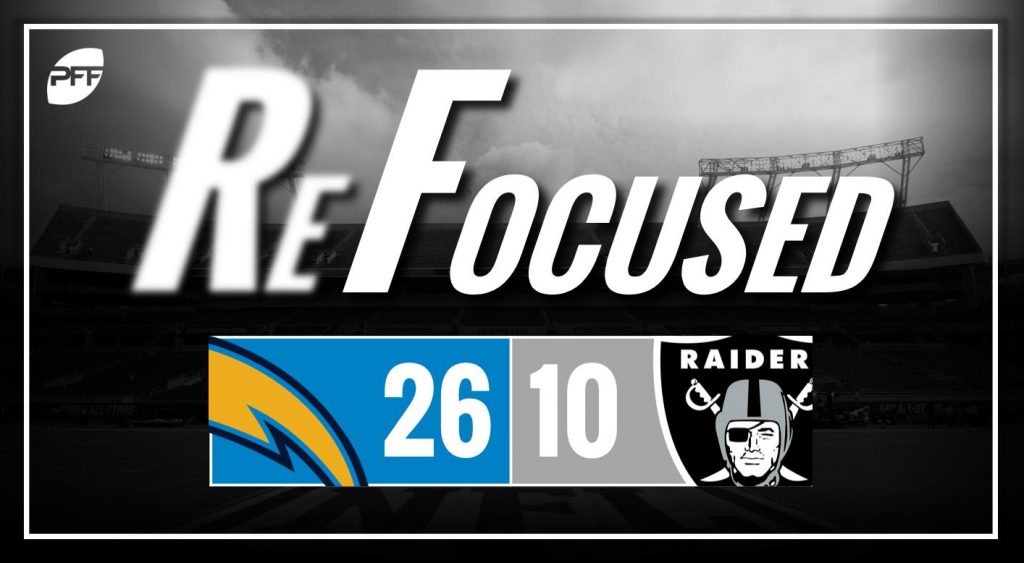 Rookie sensation Derwin James continues to make big plays. James quickly identified a Raiders' screen pass and made a tackle for a loss. However, James did get flagged for pass interference on an end zone fade to Jared Cook.

Melvin Ingram intercepted a Derek Carr pass in the end zone in addition to his first-quarter sack.

Philip Rivers carved up the Oakland defense completing over 80% of his passes for 339 yards and two touchdowns. Credit the offensive line for providing the time but we saw vintage Philip Rivers performance this afternoon.

Melvin Gordon was utilized often and had 120 yards from scrimmage. Combine that with Keenan Allen‘s 90 receiving yards, and the Chargers' top-two threats combined for 210 yards, which is a recipe for success any week.

Rookie left tackle Kolton Miller had a rough outing in pass protection with multiple hurries surrendered. Miller gave up an opening drive sack to Chargers' Ingram on an inside spin move. Miller also gave up a third-quarter sack to Darius Philon on an outside rush. Miller then gave up a fourth-quarter sack to Isaac Rochell on an inside move.

Martavis Bryant lost a costly fumble in the first half. Bryant also caught a deep crossing route for a 47-yard gain in the fourth quarter.

The Raiders' defense wasn't able to get off the field on third down, as the Chargers converted over 50 percent of the time, which led to long sustained drives and a tiring defense. There were some bright spots on the defense, as rookies Arden Key and Maurice Hurst stood out among the front seven. Hurst did well at the point of attack and generated a few pressures.

The secondary had its troubles today with a few busted coverages leading to big gains and third down conversions. Not all the blame can be put on them, though. The defensive front didn't generate much pressure, which is asking for trouble against a veteran quarterback like Rivers.

Costly turnovers from Bryant and Carr paired with a poor defensive effort in the secondary made for an embarrassing loss for the Raiders in Los Angeles.