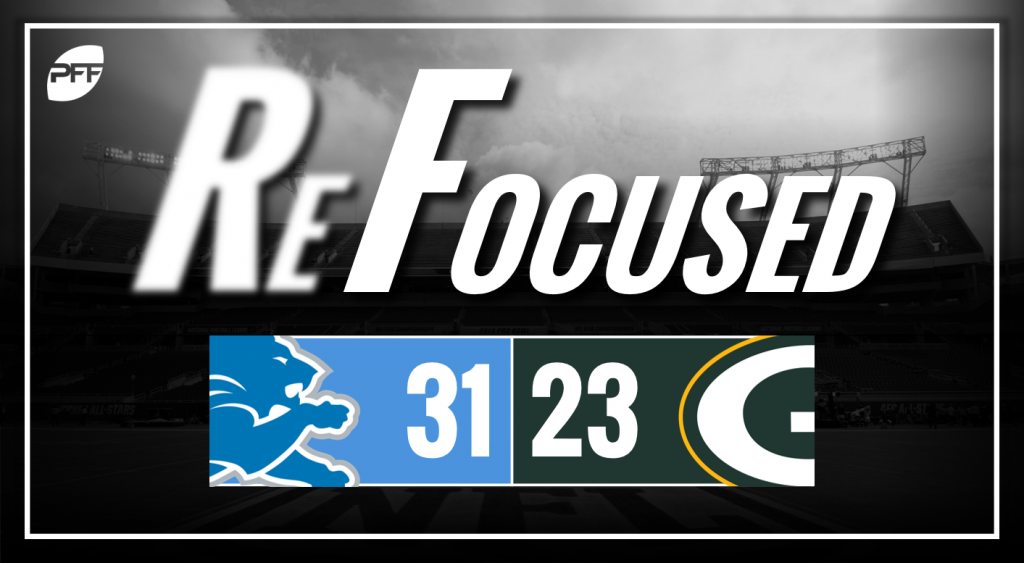 Aaron Rodgers‘ numbers look big because of volume, but he struggled throughout the game to consistently find open receivers. He took multiple coverage sacks as a result of him holding onto the ball too long (and not having the legs to scramble), and his putting the ball on the ground multiple times in the first half proved costly.

Davante Adams may have been a game-time decision, but he was clearly Green Bay's best player on offense today. He torched Detroit's secondary repeatedly on intermediate and deep throws, and the Lions just couldn't keep up with him.

Packers 2017 second-round pick Kevin King had a very tough day trying to cover the Lions’ wide receivers on Sunday. He was responsible for two of Detroit's touchdowns and could have let up another if Mavin Jones did not lose control of the ball going to the ground.

The Packers continued to struggle to get any pressure off the edge for their defense. Stafford was moved off of his spot often enough from pressure up the middle, but the edge guys couldn't force Stafford to step up into that pressure.

Matthew Stafford had a solid overall performance on Sunday against the divisional rival Packers. In the first half, he was great throwing the ball down the field, which was highlighted by two well placed deep passes. Stafford opened the second half a bit shaky with a few misses and a dropped interception, but he led the Lions on a big touchdown drive to open the fourth quarter, which made the Packers odds at a comeback much longer.

When the Lions got to the goal line, they relied on LeGarrette Blount to pound the ball in for six. On both of his goal-line carries, he did just that, even though the blocking wasn’t great. He used his instincts and power to help the Lions get an early lead.

Rookie Da'Shawn Hand was a monster in the first half, both against the run and on the pass-rush. He notched multiple run stops and a number of pressures, before posting the biggest play of his young career, a strip sack and recovery on Rodgers just before halftime.

Cornerback Darius Slay had an afternoon he'd like to forget, as he was responsible for the Lions' share of Adams' big day. He followed Adams into the slot on multiple snaps, and seemed to get lost at times when he left his traditional outside corner position.

Green Bay:  Dome teams have long been accused of piping in sound, but someone should check Detroit for artificial wind, as Mason Crosby‘s five missed kicks doomed the Packers.

Detroit: Without getting much going on the ground, moving the ball came down to Stafford and his trio of receivers to get the job done. With adequate protection, they did enough to keep the Packers trailing and got into the end zone enough for a crucial divisional win.