The Dallas Cowboys defeated the Detroit Lions, 26-24, in Week 4 of NFL action. 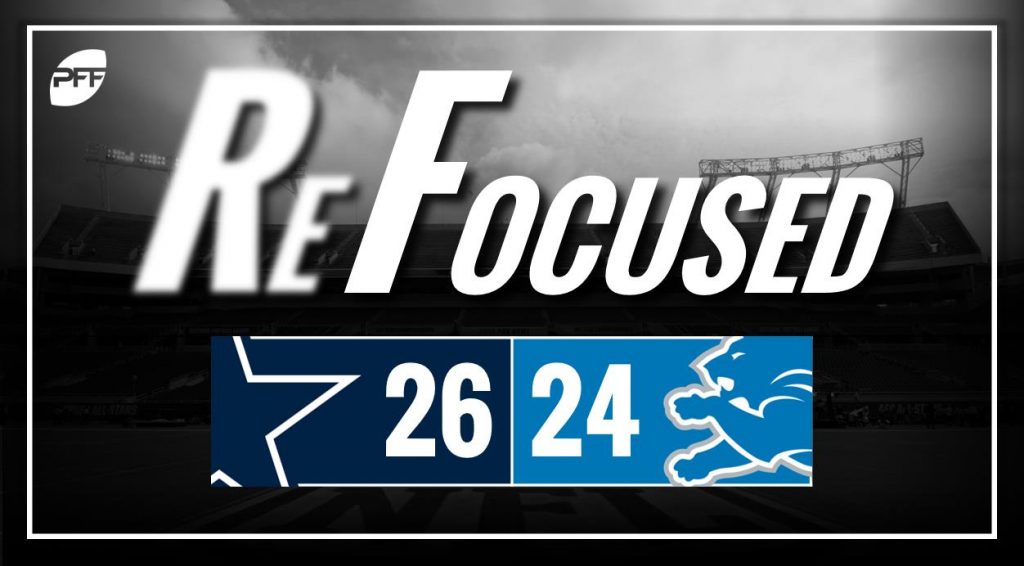 Ezekiel Elliott put the Cowboys' offense on his back against the Lions and produced throughout the game to take Dallas to their second win of the season. Elliott broke multiple tackles and picked up key conversions on the ground while adding further value in the passing game, capping those contributions off with the deep gain on Jarrad Davis to set up the Cowboys' game-winning field goal.

Tyron Smith put up arguably his best performance of the season so far, taking advantage of facing off with a subpar group of edge rushers to keep the Lions' defensive ends quiet throughout the game. He created big running lanes off the left side to help Elliott to his big day with consistent gains to his side.

It was a mixed outing for Jeff Heath, who missed multiple tackle opportunities for the fourth straight week, most notably on a pair of Lions' touchdowns. Heath had his share of stops in the game, as well, but his most notable impact came as he was faked out by Golden Tate up the right sideline in the first half before he was run over by Kerryon Johnson in the fourth quarter in his final participation in the game.

Matthew Stafford and Tate may wonder what more they had to do to get the Lions over the line for their second win of the season. Hooking up for over 125 yards — with Tate adding more than half of those after the catch — their two touchdowns gave the Lions leads at either end of the game, exploiting a bust in the Dallas secondary at the end of the game, but it wasn't enough.

Frank Ragnow backed up his breakout game last week against the Patriots with another solid outing against the Cowboys. He struggled with stunts in the first couple of games this season against the Lions and 49ers, so to perform so well against a defense like the Cowboys that uses them so frequently is another encouraging sign in his development.

Darius Slay has rebounded from surrendering a passer rating above 100 in the Lions' Week 2 loss to the 49ers with a pair of strong performances. He made pass breakups, tackles for short gains and contested multiple passes even when he was giving up passes. Short of an interception, this was Slay at his best for the Lions.

Fourth-round pick Da'Shawn Hand produced his biggest impact of the season as a pass-rusher against Cowboys in defeat, coming oh so close to producing a pivotal play that could've set the Lions up for victory. Already with one fourth-quarter sack to his name pursuing Dak Prescott to the right sideline, Hand stripped the ball from the Cowboys signal-caller, sending him reeling back to his own 18-yard line to recover. But Prescott had the presence of mind to escape and throw the ball away — a swing of at least 14 yards in field position that could've altered the rest of this game.

Elliott was the star of the game and the single biggest reason for the Cowboys' victory. Aptly supported by some strong showings up front from his offensive line, Elliott's big plays and consistent production pushed the Cowboys back to .500.

Dallas' star was Detroit's Achilles heel. Elliott walked all over the Lions' defense to help his team secure the win.