The  Carolina Panthers defeated the Cincinnati Bengals, 31-21, continuing the third full week of action in the NFL. 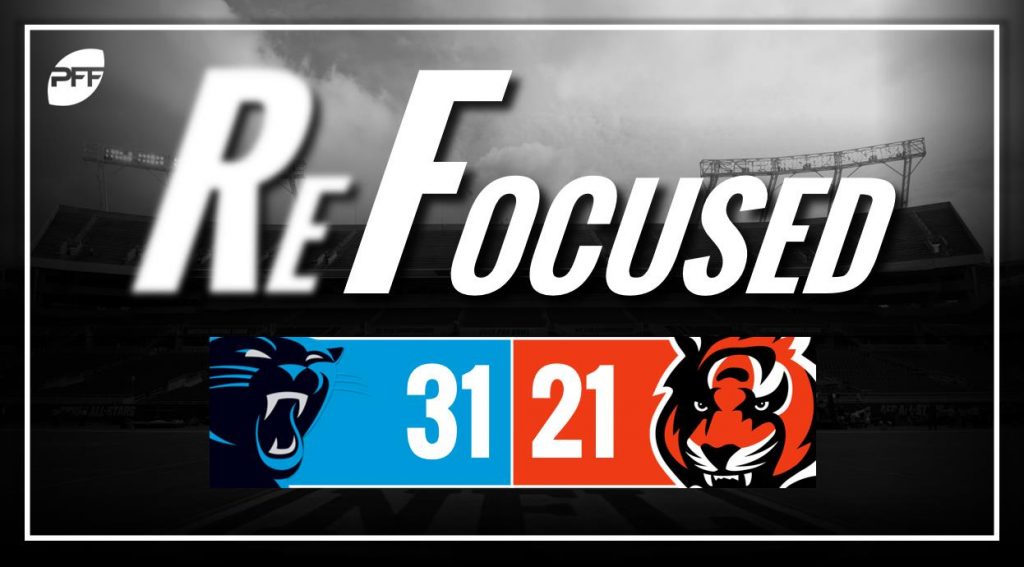 This game showed just how good a weapon running back Christian McCaffrey can be for the Panthers. Used mostly as a receiver over the first two weeks (second-most receptions in the NFL), the Bengals surely didn't expect much between-the-tackles running from the back. But the Panthers had other ideas, as McCaffrey gashed the Bengals for 184 yards on 28 carries, 10 more carries than he had in the first two weeks combined. McCaffrey simply couldn't be tackled on first contact, constantly breaking free and picking up multiple first downs on the ground while barely contributing through the air.

Cam Newton didn't need to do much with McCaffrey running the show, but when he had to pass, Newton looked good. While he is always going to have his high-throw misses, Newton limited his mistakes and was mostly on target against Cincinnati. He started off the game with a great in-stride deep throw that was dropped by his receiver. He then continued his solid day by making multiple third-and-long completions that extended drives. He also added his usual effectiveness on the ground, to the surprise of nobody.

Cornerback Donte Jackson had a nice day in coverage for the Panthers, coming away with two interceptions and recording two pass breakups. The secondary had a tough task coming into the game in trying to slow down A.J. Green, John Ross and Tyler Eifert, but they held up okay apart from a few plays where Dalton was able to get out of the pocket and find open receivers while scrambling.

The Panthers' defensive line was able to get a number of pressures on Dalton and came away with two sacks. Kawann Short stood out among the unit, as he made stops in the run game and got the better of the Bengals' offensive line while rushing the passer.

Andy Dalton had an up-and-down day as he threw for 350 yards and four interceptions. However, there was one that you could truly pin on Dalton with the others coming by way of a deflection from a pass break up, another from a miscommunication where the receiver stopped the route and the last on the hail mary attempt on the last play of the game. It's still tough to win in the NFL when you turn it over four times.

With Green leaving early due to injury, Tyler Boyd stepped up and caught six passes for 132 yards and a touchdown. Giovani Bernard looked poised for a big game but was banged up in the second half, and the Bengals relied on the air attack after that, throwing 46 times.

The Bengals struggled to stop the run in this one, but it wasn't really the fault of their defensive line. Guys like Carlos Dunlap and Ryan Glasgow were actually very solid in the run game, causing havoc and closing holes that the offense was trying to set up. While they were let down by their linebackers missing tackles, they were looking solid up front.

The Panthers didn't need to pass much, but when they did, it seemed like Geno Atkins was constantly in Newton's face. Nobody on the Panthers' interior line could stop him, as he consistently drove his blocker right into Newton. He finished the game with multiple pressures.

This one is easy, as the Panthers likely don't win this game without the efforts of McCaffrey. He ran the ball incredibly effectively, showing both patience and creativity as he rumbled for his nearly 200 yards on the ground.

Regardless if not all were his fault, Dalton will need to cut down on the turnovers going forward for the Bengals to have success. The Panthers gave up a lot of yards but were able to make plays when it mattered most, helping to propel them to a win.