The Denver Broncos defeated the Oakland Raiders, 20-19, continuing the second full week of action in the NFL. 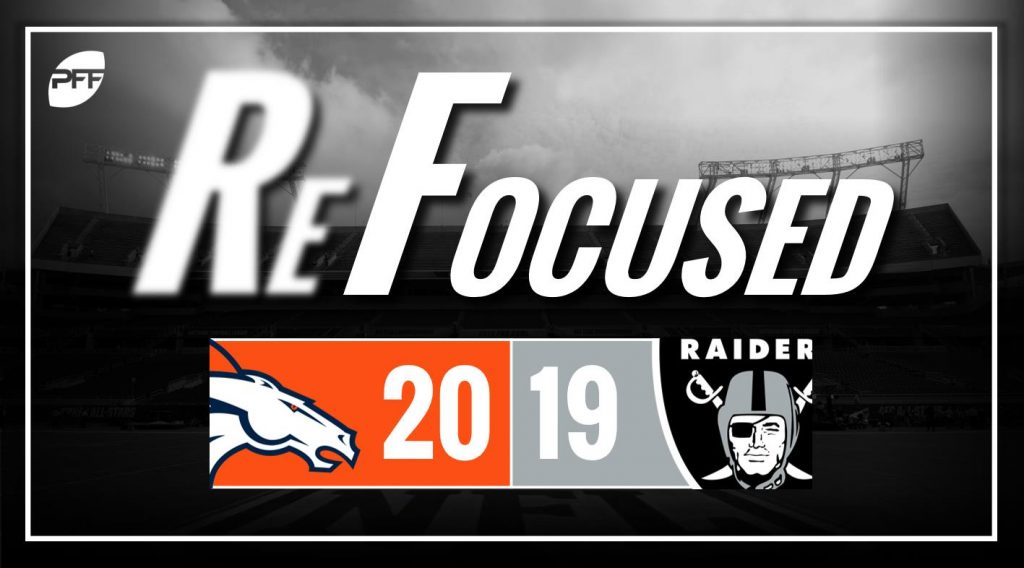 The Broncos seemingly found a hidden gem from last year's draft in undrafted rookie Phillip Lindsay. Lindsay averaged over seven yards per carry and was consistently breaking tackles and looking a threat every time he touched the ball.

In the second half, when wide receiver Emmanuel Sanders was targeted, the Broncos were able to finally move the ball through the air and looked like a better offense. The ending drive will make the offense look better than the rest of the game did. When it mattered, Case Keenum moved the ball. Before that point, the offense looked stagnant.

Von Miller was up to his usual pass-rushing ways, as he gave Donald Penn fits all game long. A strip sack on the opening drive was nullified because of a defensive holding penalty. Otherwise, his traditional box score would be even more impressive. Miller looked in midseason form with quickness, power and hand usage.

The Broncos new-look secondary isn't quite there yet, as Tramaine Brock and Adam Jones both struggled to cover Cooper when tasked with the duty. Bradley Roby didn't fare well, either, while Chris Harris Jr. also allowed a touchdown to Raiders' Seth Roberts. The Broncos have started the season 2-0, but their secondary isn't playing up to the standards of previous seasons.

The Broncos' quick passing game limited the amount of pressure the Raiders' defense was able to apply to Keenum. Rookie edge defender Arden Key showed glimpses of potential, but the former LSU product was very limited as a pass-rusher.

Quarterback Derek Carr looked much more comfortable in Jon Gruden's offense in Week 2 than he did in the season opener, as highlighted by his ridiculous 90.6 completion percentage and nine yards per attempt. He didn't take many shots downfield but was accurate when he did with a touchdown pass down the seam to Seth Roberts and a nullified go route down the right sideline to Amari Cooper.

Cooper seemingly returned from a year-long hiatus on Sunday, as he racked up 10 receptions for 116 yards on 10 targets. It was the first time since Week 8 of 2016 he hauled in more than 10 receptions (12) and the first time since Week 8 of 2017 he was targeted more than 10 times (10). If the Raiders hope to get back into the AFC West race, Cooper and Carr need to continue this efficiency and success on a weekly basis.

Keenum made up for the struggles early in the game, as he brought the Broncos back and took the team down the field in the last two minutes to take the lead.
Oakland:

As good as Carr was, Gruden's reliance on grinding out the clock with Marshawn Lynch in their final drive ultimately allowed the Broncos' offense to regain control of the ball and therefore the game.