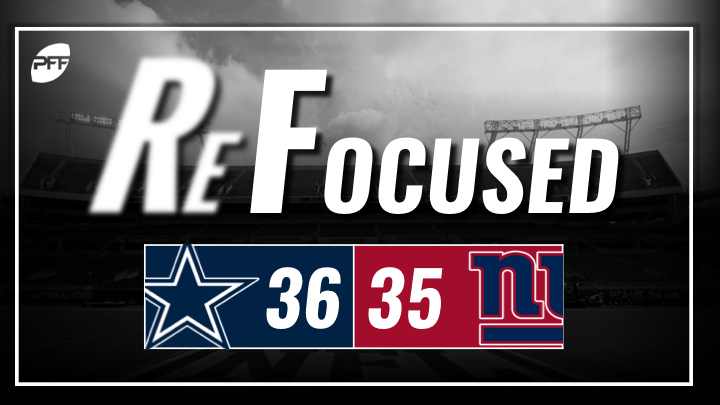 Cody Latimer couldn't come up with the final fourth-down play with Anthony Brown breaking the pass up, but he made a couple of exceptional one-handed grabs which provided the bulk of his production. Combined with some strong work after the catch by the likes of Evan Engram, the Giants' receivers left it all on the field to make plays for Eli Manning.

No roundup of a Giants' offensive performance is complete these days without a check in on Saquon Barkley. It was a slightly lower workload than we've seen in some weeks, but Barkley was still dynamic even when his blocking wasn't at its best, bouncing plays to space and beating would-be tackles to average just shy of seven yards per touch.

Trading away Damon Harrison to the Lions meant that the Giants gave up the league's premier run-stuffing defensive tackle, but Dalvin Tomlinson has done his best over the last half of the season to ensure they have suffered a minimal drop-off. Tomlinson has had multiple run stops in six of eight games since the Giants' bye week, and he wrapped up the season tying a season-high with four in today's game.

Olivier Vernon has produced a season of peaks and troughs as a pass rusher, and he finished with another high point against the Cowboys. Vernon took full advantage with Tyron Smith on the sidelines and victimized Cameron Fleming at left tackle with multiple sacks, hits and hurries throughout the game.

The Cowboys rested their starting running back, but their starting quarterback treated this like a “win and you're in” game. He came up with plays throughout the game to push the Cowboys into the postseason on a high, but even with all the big plays, Dak Prescott still left plays on the field that the Cowboys will hope can be made next week when it really counts. Twice Amari Cooper got behind Janoris Jenkins on double moves and both times Prescott couldn't find him. Hitting plays like that will be pivotal in the playoffs.

Any time you do something that hasn't been done by someone from your franchise in 35 years, you've had a pretty good day. Blake Jarwin picked up three touchdowns. Adding that weapon over the middle of the field will further open up the passing options for Dak Prescott next week, as the Cowboys look to add a second home playoff win.

The Giants' ball carriers found and exposed Chidobe Awuzie in the ground game today, extending his streak to four games with a missed tackle to end the regular season. Awuzie had the chance to make plays on the edge and pick up defensive stops but was instead the source of extra yardage for Saquon Barkley and Wayne Gallman.

It was a less-than-ideal end to the season for Leighton Vander Esch, who turned in his worst game of the season, including three missed tackles, and picked up a potential injury. The subpar play is of lesser concern considering the weight of his performances so far this season, but Cowboys fans will hope he carries no ill effect of the injury into next week's encounter.

New York: The Giants' pass-catchers did all they could to make plays, but they were ultimately unable to match the efforts of Dak Prescott and the Cowboys.

Dallas: This game was anything but a must-win for the Cowboys, but their quarterback treated it as such, and thanks to a miraculous catch from Cole Beasley they take the positive vibe of a comeback win into a home playoff game next week.