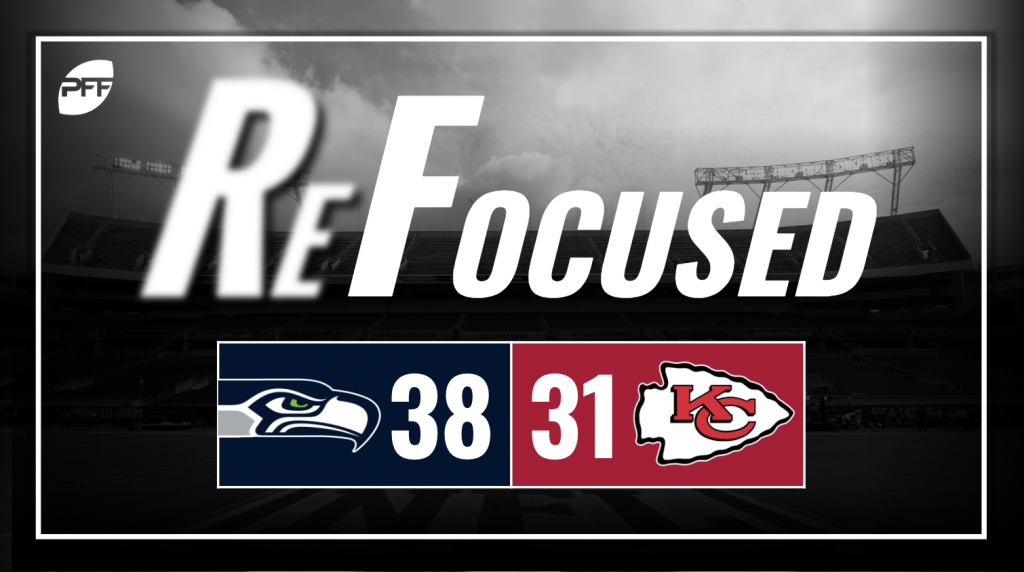 The Seattle run defense looked porous throughout the night, Dion Jordan did force a fumble, and that seemed to temporarily change the tune as the Chiefs moved away from the ground game significantly following that. Also of note was Bobby Wagner missing his first tackle in 86 attempts when Damien Williams spun out of his grasp.

Although the defense struggled against the pass throughout the second half, they generated pressure on the edge with Frank Clark and Jordan moving Patrick Mahomes off his spot on a few occasions. Akeem King did a magnificent job helping to limiting Travis Kelce when matched up against him.

Russell Wilson led the Seahawks to victory with some perfect passes to beat tight coverage. His best pass was the 45-yard moon ball down the sideline to Tyler Lockett against tight coverage, which led to a touchdown drive to put the game out of reach for the Chiefs.

Doug Baldwin made play after play for the Seahawks with his first 100-yard game of the season. Baldwin's longest play of the game was only 29 yards, but he still averaged 18 yards per catch on seven catches. He managed some special catches, the highlight of which was his one-handed grab to put the Seahawks at the one-yard line for the final touchdown of the game.

Mahomes was held in check in the first half, throwing for under 100 yards. The second half was a different story, starting out with a seven-play drive, which was capped off by a beautiful throw to Charcandrick West for a touchdown. He continued his strong effort from there, going 23-of-40 for 273 yards and three touchdowns.

Damien Williams was a stud for the Chiefs on the ground, his only blemish being a fumble in the second quarter. He has been the main man for Kansas City’s rushing attack since the release of Kareem Hunt and ran for 103 yards on 13 carries on the night.

Chris Jones was all over the Seahawks guards using his quickness and strength to generate pressure after pressure. The only thing that held him back was a couple of missed tackles, especially against Wilson. Even though he ended with two sacks, he could have had more to make the stat sheet look even more impressive.

The Chiefs' secondary had a difficult night, as they had to play a quarterback who was on fire. When the Seahwaks threw the ball, they went after the cornerbacks and hardly any passes went in the direction of the Chiefs linebackers. The Seahawks picked out the weakest on the outside and made plays when they needed it.

The Seahawks started the game by running at the Chiefs, and Chris Carson gained 116 yards, but when it mattered most, the game was about Wilson.

After their passing attack was stymied in the first half, Mahomes and the skilled playmakers of the Chiefs got rolling in the second half. But it wasn’t enough to keep pace with the Seattle offense and Kansas City drops to 11-4 on the season.