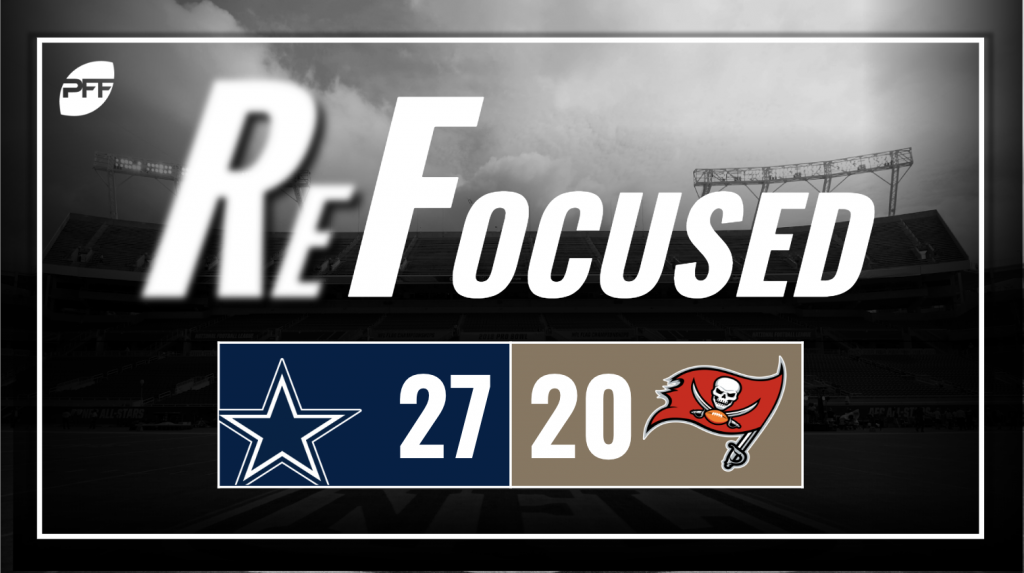 The Cowboys' defensive line ran stunts on the majority of the passing plays and were pretty successful at confusing the protection and getting pressure. When pressure failed to reach Jameis Winston quickly, the coverage on the back end held up well downfield.

Byron Jones had the tough assignment of covering Mike Evans much of the day, surrendering a decent amount of production, including a 38-yard reception early in the game. However, Evans got away with an offensive pass interference push-off on that play.

Dallas QB Dak Prescott put together an excellent game of error-free keep away while completing 80% of his passing attempts. His nicest throw on the day came on their opening drive where he split the Tampa Bay coverage to connect with rookie WR Michael Gallup on a go route down the right sideline on 3rd & 12 for a 31-yard gain. Prescott would finish off the drive with a seven-yard option run seven plays later.

Far from Ezekiel Elliott’s best game as a Cowboy with a dropped target and a fumble forced by DB Carlton Davis coming off the edge where Elliott was lucky enough to have teammate Dalton Schultz secure the loose ball. However, scratch those two errors, and Zeke proved to be the nail to seal Tampa Bay’s coffin down the stretch. His rushing totals could’ve gone well above the 85 yards he recorded if not for a pair of penalties that wiped out around 40 yards.

Winston was under pressure quite often, as the Buccaneers had a tough time handling the numerous stunts ran at them by the defensive line. When Winston did have time to throw, he struggled to find open receivers downfield settling for underneath checkdowns.

Peyton Barber did not get a whole lot of help from his offensive line in finding running room. Most of Barber's yards came after contact, and his best run of the day, in which he made four defenders miss, was called back due to an offensive hold.

A statement was made to the rest of the NFL in this game that future teams facing the Buccaneers’ rookie defensive interior Vita Vea had better consider double-teaming him, or else. Recording no less than a half dozen QB pressures, Vea’s best play came when he burst through the block from Dallas LG Xavier Su’a-Filo to sack Prescott for a loss of  nine yards to push the Cowboys out of field goal range to end the end first half.

Bucs veteran DB Brent Grimes was the defender targeted in coverage on many of Dallas’ most important plays. Grimes was in coverage on the 31-yard gain mentioned to Gallup, an 18-yard post to WR Amari Cooper and a fade route – again – to Gallup for Prescott’s lone TD pass.

It was an up-and-down game for much of the offense that did just enough to overcome the Bucs to claim the NFC East title.

The Cowboys' pass-rush and coverage were key to containing the Bucs' offense enough to come away with the W.