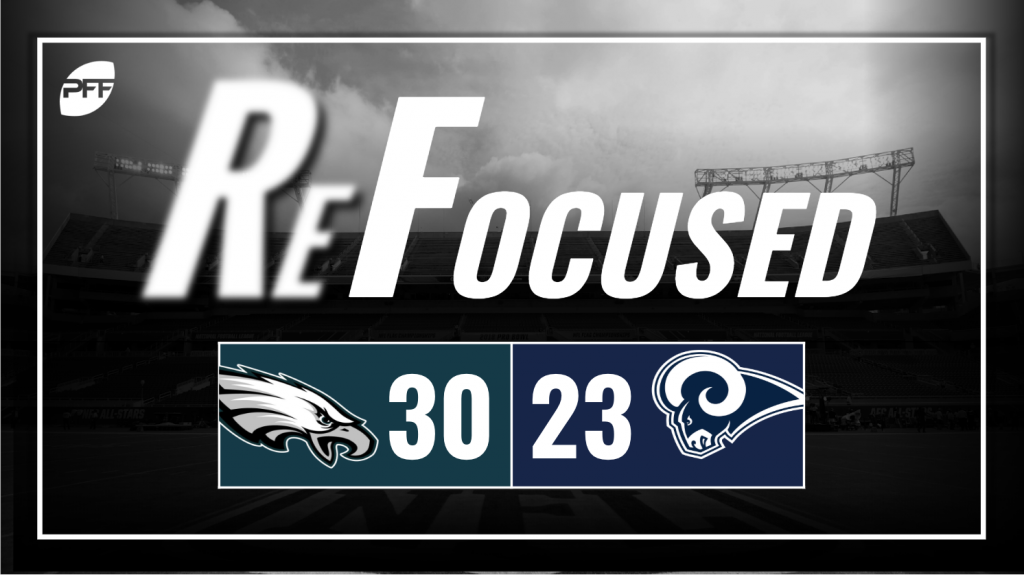 Nick Foles and Alshon Jefferey had their connection working Sunday night, as Foles ended the game 24-for-31 for 270 yards and found Jeffery eight times for 160 yards. Eagles fans will be hoping Foles can spark a run towards the postseason and create something similar to the run a season ago.

Philadelphia had an effective running game, as the trio of Darren Sproles, Josh Adams and Wendell Smallwood combined for 111 yards on 30 carries. Rookie tight end Dallas Goedert had an impact in the run game as a blocker, moving defenders off the ball and creating lanes.

The Eagles defensive line generated consistent pressure against Jared Goff, especially in the fourth quarter, where time and time again the Eagles' defense forced Goff to throw from his back foot. While the Eagles only recorded one sack, they hit Goff numerous times and made his life uncomfortable.

The cornerbacks for the Eagles have struggled with injuries down the stretch, but a healthy Avonte Maddox stood out against LA. He limited the Rams' success when throwing in his direction and recorded an interception.

Aaron Donald and Ndamukong Suh were neutralized to a degree. Donald recorded a hit and few pressures, but with the number of double teams he was facing, it was going to be a tall task for him to have a significant impact.

Aqib Talib came up with a great interception at the beginning of the fourth quarter, breaking on an out route and jumping in front of Zach Ertz. To that point, Talib had a tough time holding Jefferey in check and was liable for a busted coverage which resulted in a 50-yard completion.

Goff was off target all game. This was never more on display than the last pass of the game, where he was unable to keep the ball low enough to give his wide receiver even a chance to bring in the ball. On top of that, Goff also threw two interceptions, one being a throw that he should never have tried after falling down after his foot was stood on and was trying to save five yards on third down instead of taking the sack and living for another day

Todd Gurley was the leading receiver for the Rams and it was all on check downs, as the Eagles' defense took away anything downfield. Unfortunately for the Rams, Gurley never got enough on the ground to force the Eagles out of their soft coverage and was unable to make defenders miss on a frequent basis to make the offense be effective with the check down passes.

It was a vital win for the Eagles in order to keep pace with the Cowboys in the division, while also trying to keep their wild card hopes alive. They scored three times on the ground and Jefferey had a big game, catching all eight of his targets.

The Rams may have outgained the Eagles, but the three turnovers put the game too far out of their reach.