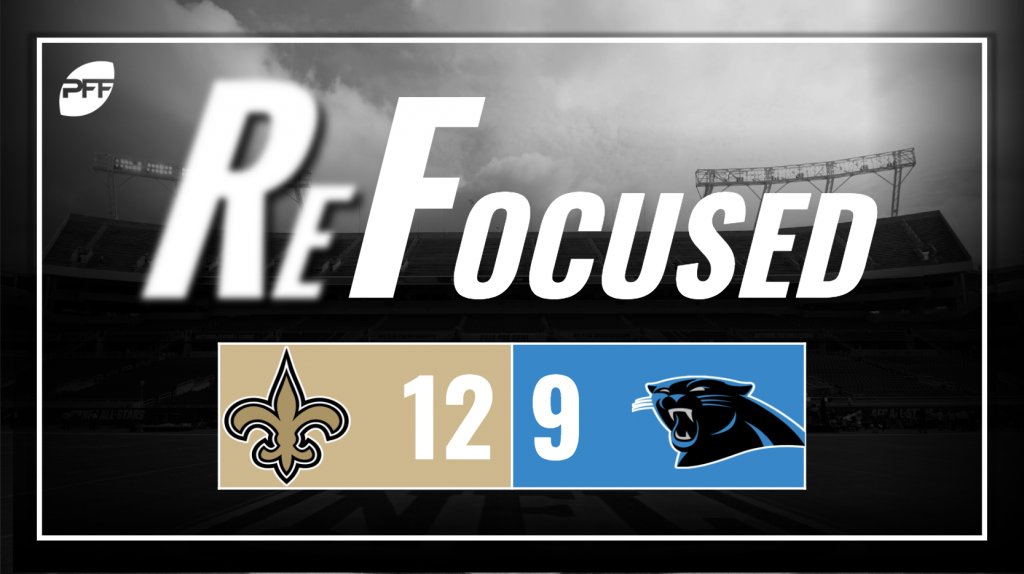 The Saints' offense only had three drives of note in the game, the only touchdown was scored by running back Alvin Kamara. When he found some space to exploit, he made a handful of plays. The biggest play by Kamara was on 4th & 1 when he broke Thomas Davis‘ tackle to get what looked like would be the first down to take away nearly all the time from Panthers, which a fumble through the end zone didn't allow.

The passing game for the Saints struggled to get going all game long, with Drew Brees only passing for 203 yards and two interceptions, one of which was returned for a pick-two that doesn't go down on the stat sheet. Brees had one unlucky interception that bounced off of Davis' Helmet.

Eli Apple has been up-and-down since joining the Saints this season but put together a standout effort in coverage Monday night, picking off Cam Newton in the red zone, breaking up another pass and coming up with a third-down stop on Carolina's final drive of the game.

Cameron Jordan got the better of Panthers tackle Taylor Moton throughout the game, beating Carolina's right tackle for multiple pressures while also giving him trouble in the run game.

Newton struggled to get anything going, completing just one pass that traveled more than 10 yards in the air. Accuracy was a problem throughout the night, as Cam was off target on a number of throws to the short and intermediate areas. And on the Panthers' only trip to the red zone, Newton was intercepted by Apple on an underthrown ball to Devin Funchess.

James Bradberry had two huge takeaways, the first being an interception where he was in the right position to pick a ball off of Davis' helmet. But the second was a forced fumble that went through the back of the end zone to give the Panthers the ball at their own 20 with a 1:44 left to try and get the game-tying field goal.

The Panthers' defense always revolves around Luke Kuechly and everything he brings in the middle of the field. Against the Saints, he was a force in the run game, especially when he was able to pick out a misdirection play to shoot the gap for a tackle for loss.

The Saints won this game because their defense didn't allow an injured Newton to gain over 150 yards passing and rushing combined. New Orleans' offense did just enough with long drives to get to 12 points and dominate the time of possession, especially in the fourth quarter where they held the ball for over 10 minutes on two drives of 10-plus plays.

You're not going to win many games when your quarterback throws for only 131 yards, and Newton simply wasn't able to make enough plays for the Panthers to have much hope at coming away with a win even with an excellent effort from their defense.