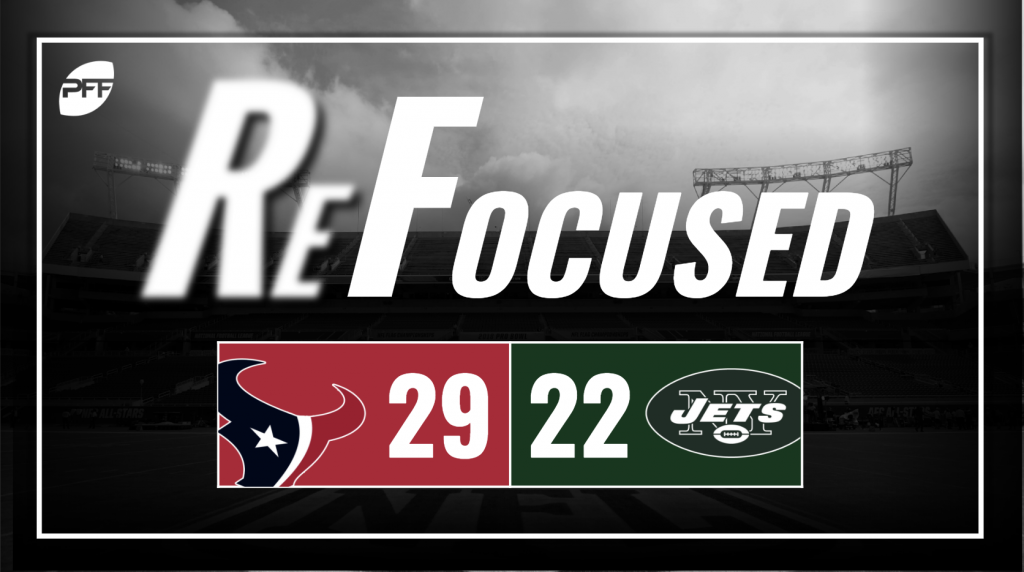 Deshaun Watson had no help from the Texans' running game, but it did not matter. Watson found DeAndre Hopkins over and over again to exploit the mismatch Hopkins provides against any opponents. Hopkins had the catch of the day with the touchdown to put the Texans ahead late in the fourth quarter, as he stole the ball away for Morris Claiborne as he was held in the end zone.

The rest of the Texans provided little outside of one big play by DeAndre Carter, who took a short pass against a blitz and turn upfield to gain 50 yards. Outside of that play, the only player of note on the Texans was Demaryius Thomas, who gained 59 yards and showed he still had some juice left.

The Texans' defensive front gave the Jets fits throughout the game, as J.J. Watt and company were way too strong for the Jets' offensive line. Watt recorded a couple of sacks and gave the Jets issues all game long, as he was too quick and strong for any lineman the Jets had.

Jadevon Clowney got in on the action too with one sack, but the Texans moved him all over the field to create mismatch after mismatch. Clowney was consistently getting quick pressure and forcing the ball out of Darnold's hand quickly.

The Jets recorded six sacks, but most of them were either clean-up or unblocked sacks, as the pass-rush of the Jets struggled to record consistent pressure and allowed Watson to tear their pass defense to pieces.

Leonard Williams, while not managing to get a sack, was one of the better players on the Jets' defense. He prevented the Texans' ground from getting anything going throughout the contest. When a play was needed to be made against the run, Williams was often the man getting it done.

Sam Darnold had one of his best games as a pro and showed the Jets a lot to look forward over the coming years. The inability to hit any deep pass limited the offense, though. If the Darnold had more success with Robby Anderson downfield, the Jets might have come out as winners in this closely fought game.

Anderson used the threat of his speed to keep defensive backs away from him, which allowed him to nearly gain 100 yards with his longest catch going for 26 yards.

The Texans won this game because of the connection between Watson and Hopkins on offense and the defensive front.

Darnold nearly pulled off a surprising win for the Jets, but the lack of playmakers meant that every time the Jets needed a big play, they never had it in them. And every time they had the ball, they had to drive the length of the field.