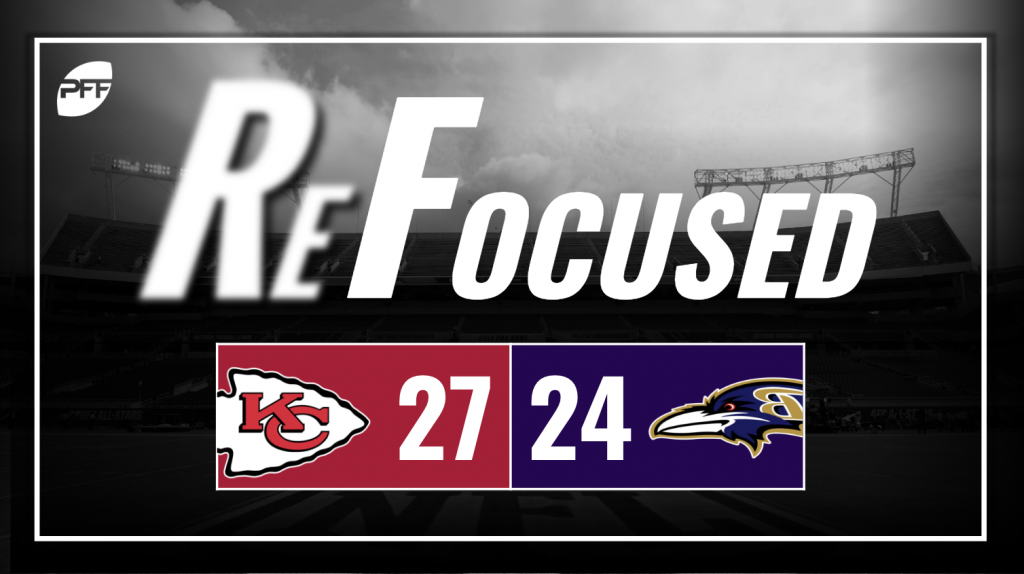 Kendall Fuller was good on the back end for the Chiefs, as was Derek Nnadi up front against the run.

The Chiefs' pass-rush helped win the game. Dee Ford came away with a crippling strip-sack that would cost the Ravens' the game before the end of regulation if Harrison Butker didn't miss the ensuing field goal.

Patrick Mahomes has become one of the most exciting players in football. The Ravens camped out on his front porch, moving him from his spot with regularity. Yet, he managed time and again to find the open receiver while on the move. Short of forcing a throw targeting WR Tyreek Hill on a crossing route early in the third quarter that would end up in the hands of Ravens’ DB Brandon Carr as Mahomes was hit by edge defender Za’Darius Smith, Mahomes distributed the ball carefully and accurately.

Many wondered how the Chiefs would run the offense in the post-Kareem Hunt era and the answer was very simple. Around 40 percent of the total targets were aimed at Hill and TE Travis Kelce. Hill, especially, exploded for a monster day. But the play that amazed everyone seated in Arrowhead occurred on Kansas City’s second drive of the fourth quarter down 24-17 where Mahomes scrambled to the right flat avoiding Smith in pursuit and tossed a laser to Hill over the middle for a 48-yard gain on fourth down.

Lamar Jackson made some plays running Baltimore's ball-control offense. Jackson struggled with accuracy at times, but he did make some decent throws as well. Pocket presence is one area he will improve going forward, as he is extremely talented and can put a defense on its feet.

While it looked as if Baltimore struggled in pass protection, some of the issues were rooted in Jackson looking at the rush.

A magnificent effort that will be overshadowed by the overtime loss, edge defender Matthew Judon made life difficult for Mahomes and Co. with more than a half-dozen quarterback pressures, nearly as many hits and a sack.

Adding to the clinical display by Judon, fellow edge defenders Smith and Terrell Suggs added a sack apiece as well as several hurries that had Mahomes’ looking over his shoulder on seemingly every dropback.

Jackson made some nice plays, and Baltimore ran the ball well. But the Chiefs' defense ultimately made the plays when it mattered.