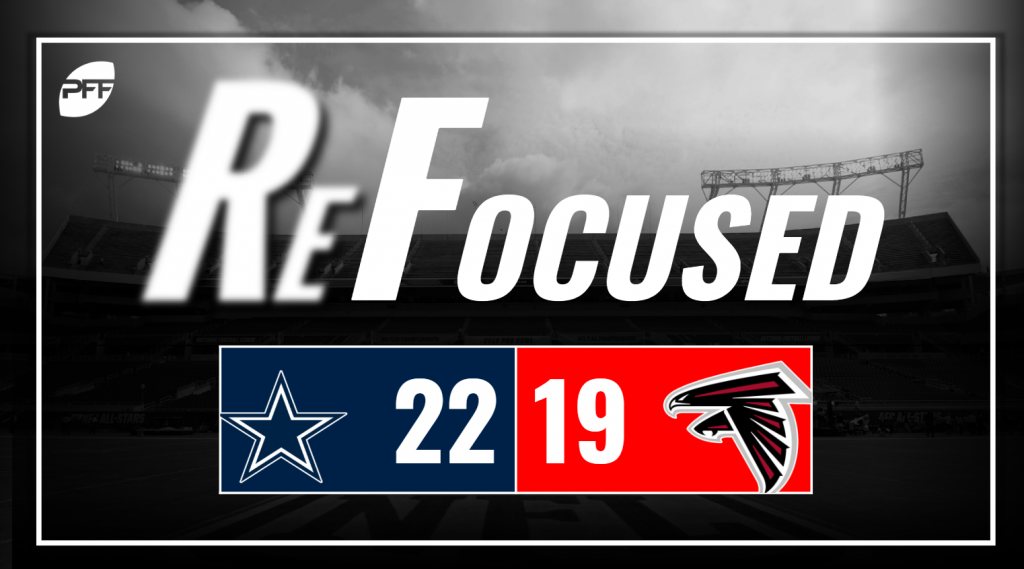 It was an up-and-down day for Matt Ryan, who was accurate and efficient in the short and intermediate area and made a nice throw down the right sideline to Julio Jones for the game-tying score late. His one interception on the day was unlucky, bouncing off the hands of rookie Calvin Ridley. However, he also got away with two other near-picks, including one where Jones bailed him out with a hit on Jeff Heath to jar the interceptions loose.

Jones was the best player on the Falcons' offense, hauling in six passes for 118 yards and a score and converting five of those receptions into either first downs or a touchdown. He also made the aforementioned heads-up play to save an interception on a drive where Atlanta would end up getting a field goal.

Desmond Trufant was locked up on Amari Cooper nearly all game and helped hold Cooper to just 36 yards, as the Falcons secondary contained the Cowboys' passing game Everything had to be short passes, as there was no separation downfield.

The Falcons rotated their edge defenders a lot in the game. Takkarist McKinley was a force in the run game. While he only recorded a couple of tackles, he caused the Cowboys offensive line a lot of issues at the point of attack and helped other defenders make plays.

Byron Jones continued his strong season with a good showing when matched up with Jones, forcing the Falcons to largely look to Julio on the opposite side of the field against Chidobe Awuzie.

Demarcus Lawrence was the only Cowboys defender who was able to generate much of a pass-rush on his own, as Dallas relied heavily on stunts to try and bother Ryan in the pocket. While that was largely effective in the first half, Atlanta's offense line did a better job handling those stunts in the second half, and Ryan was much better under pressure as a result.

Dak Prescott did not produce any explosive plays, but at the same time, he didn't put the ball in danger. The most important play Prescott made was on the last drive. While moving to his left, he threw the ball to Cole Beasley, who came away from the play with 19 yards to put the Cowboys into field goal range.

With Prescott having a fairly quiet game, the Cowboys relied on Ezekiel Elliott and the ground game. Elliott gained 122 yards on the ground, most of which was aided by Elliott making defenders miss. On top of that, Elliott recorded 79 more yards in the passing game, as Elliott broke 200 yards from scrimmage.

Third-down miscues in Dallas territory for basically the entirety of this game led to far too many field goals in a game Atlanta could've easily won.

The Cowboys relied on defense and running back Elliott to make plays. His 200 yards from scrimmage was the bulk of the offense, as the rest of the team struggled to get the ball moving throughout the game.