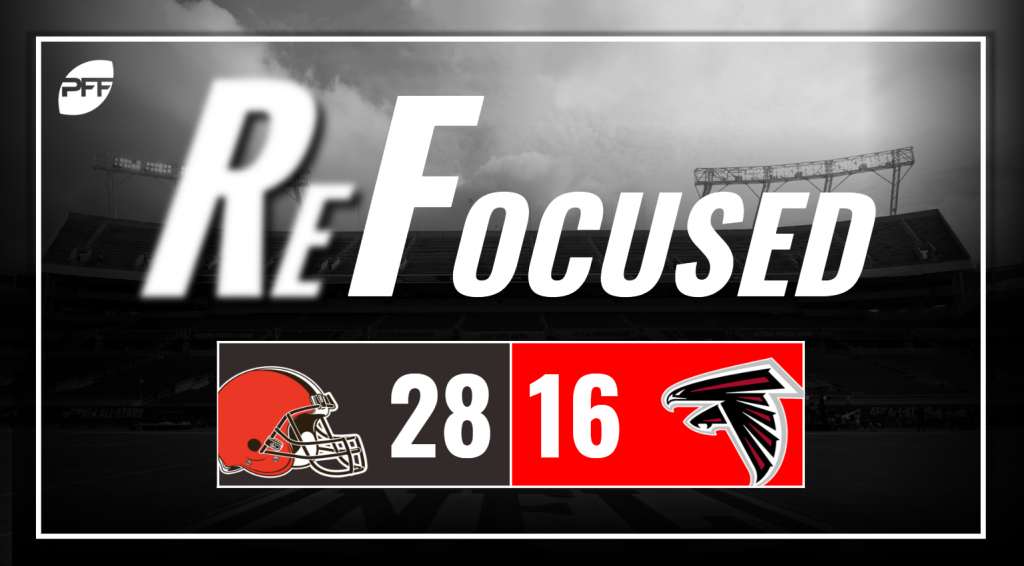 Greg Robinson continues to struggle at left tackle in both phases. He took two holding penalties on runs to his side and gave up a strip sack as part of multiple pressures surrendered on the day.

Rookie running back Nick Chubb was the star of the show, not just for his 92-yard touchdown gallop but for his all-around play. He was effective on the ground throughout the game and also proved a viable receiver out of the backfield.

Cleveland cornerback T.J. Carrie had an outstanding game this afternoon. Carrie was targeted relatively often, but he was usually all over star wide receiver Julio Jones and prevented multiple catches by breaking up the pass at the catch point.

Linebacker Joe Schobert was a big key to the Browns' success today. Schobert was all over the field, as he contributed both by rushing the passer and defending the run. However, he was at his best when covering the middle of the field and preventing big plays after the catch.

The Falcons don't appear to have many playmakers left on defense. Their corners struggled to close gaps effectively, and the front seven offered little in terms of controlling blockers in the run game or threatening the quarterback on pass-rushes.

Newcomer Bruce Irvin showed some flashes for the Falcons. He was quick to defeat blocks on runs to his side and also flashed his explosiveness on an inside stunt where he registered a quarterback pressure.

Quarterback Matt Ryan played well in Atlanta's loss, as he topped 300 passing yards and did not throw an interception. The reason this was not enough for a win is mainly that Ryan's mistakes came in key situations on third downs and that his receivers let him down at the catch point on multiple occasions.

The Falcons' offensive line had a solid outing against the Browns, as they protected Ryan well for the majority of the afternoon. The play-calling helped the unit, as Atlanta used plenty of play action in this game, which also contributed to the Falcons keeping pass-rusher Myles Garrett in check for most of the game.

Cleveland's run game was overpowering and was complemented nicely by the short passing game with backs Chubb and Duke Johnson Jr.

While Ryan had a good game against Cleveland, his receivers let him down by not making contested catches or gaining yards after the catch. This prevented the Falcons from maintaining long drives, which was too much to overcome for the team.