The Los Angeles Rams defeated the Dallas Cowboys, 30-22, in the Divisional Round of the playoffs. 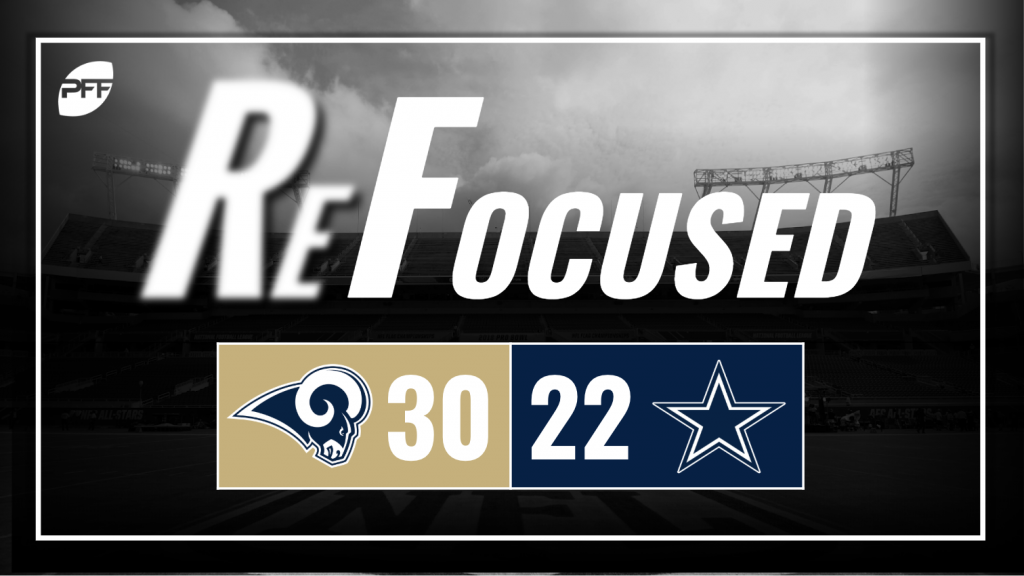 The men up front absolutely dominated this game. The Rams' offensive line kept Jared Goff clean all night, as the QB was rarely pressured throughout. In the run game, they parted lanes wider than Moses parting the Red Sea, as Todd Gurley and generational talent CJ Anderson ran up and down the field.

It wasn't a perfect game by Goff, as he missed on a number of open throws downfield and was fortunate not to be intercepted at the end of the first half, but he made enough throws to keep the game out of reach. Goff will need to be much better next week in order to advance to the Super Bowl, as the Eagles and Saints both will apply pressure at much higher rates than Dallas.

The Rams struggled to rush the quarterback, getting just one hit and one sack in the game, with the sack being a poor call on whether the QB was wrapped up or not. Ndamukong Suh had the most impact, with the one hit and a few other hurries.

Los Angeles bottled up the run very well, holding Zeke Elliott to just 47 yards and 2.3 yards per carry. They allowed just one run longer than six yards all game, and were sure tacklers pretty well throughout.

The linebacker duo of Jaylon Smith and Leighton Vander Esch were going to be vital in order to stop the rushing attack, and they struggled all night long. Smith and Vander Esch were often blocked at the second level and couldn't make up for their struggles in the run game by covering well, as neither made an impact in the passing game.

There weren't any positives to takeaway from the Cowboys' defense, as they were thoroughly outplayed in all facets of the game. The unit had been a strength all season for Dallas but failed to make key stops to get off the field.

The Dallas offensive line did an excellent job in pass protection to keep Dak Prescott clean and rarely pressured. It's even more of a feat with Aaron Donald on the other side of the ball. While he did make a couple splash plays, they kept him from being anywhere near as dominant has he has been most of the season.

Overall, Prescott just didn't play well enough for the Cowboys to win. His misread on a short hitch in the left flat was one of the worst throws in the league this season. However, instead of the possibility of a pick-six to extend a Rams' lead, Prescott lucked out that Samson Ebukam dropped the easy interception. He played better late in the game, particularly when he was given a chance to use his legs more, but still had some inaccurate passes that were impactful.

Andrew Whitworth and company controlled this game from beginning to end, and Dallas had no answer for their dominance.

Dallas' defense couldn't keep the Rams off the scoreboard enough to allow their lackluster offense to get ahead and win the game.