The Minnesota Vikings and QB Case Keenum stayed hot Sunday, winning their eighth straight game in a 14-9 victory over the NFC playoff hopeful Atlanta Falcons as Keenum went 25-of-30 passing for 2 touchdowns and no interceptions.

The Falcons were quiet on offense Sunday, with WR Julio Jones catching only two passes for 24 yards and QB Matt Ryan throwing for 173 yards. On the Minnesota side, Kyle Rudolph and Jerick McKinnon each caught touchdown passes. With that, we give you our PFF-exclusive takeaways from the contest for each team.

The veteran running back picked up 52 of his 76 yards after contact and forced three missed tackles on the ground. Murray averaged 7.2 yards per carry on runs that went through either A-gap and four of his 16 carries resulted in a Vikings first down.

Smith was up to his usual self, primarily impacting the running game with his play around the line of scrimmage. Smith disrupted a number of plays when he was down in the box that won't show up in the stat sheets, but totaled four tackles and two solo stops for short gains. Smith was not targeted at all in the passing game, forcing Matt Ryan off of his initial read on a few occasions.

Griffen played a significant role in slowing down the Falcons passing game, consistently getting Matt Ryan off the spot and forcing the ball out quickly. Griffin had success no matter where he lined up, totaling one hit and three hurries throughout the game. Griffen was stout and played well against the Falcons' outside zone running game as well, stretching a number of plays out and eliminating the chance for big plays, finishing with a solo stop on the day.

It was overall a very average day for Ryan and the Falcons passing attack, lacking the type of explosive plays down the field we've seen recently. The stingy Vikings defense forced the ball to be thrown underneath for the most part, and was tight in coverage down the field when he did take deep shots, as Ryan went 1-of-5 for 20 yards on throws of 20-plus yards. Ryan was on the bad end of three dropped passes on the day as well.

A week after exploding for over 250 receiving yards, Jones was held in check as him and Matt Ryan failed to connect on multiple occasions. Jones was targeted six times, catching two of those passes for a total of just 24 yards. The Falcons moved him around in formations a good bit throughout the game, but the Vikings plan held up and kept the passing game off rhythm. Jones also had a dropped pass early in the game.

Alford bounced back from one of his worst games of the season in Week 12 with a nice showing in Week 13. He allowed just one of two targets to be caught and had one pass breakup to go with a stop (solo tackle that constitutes as a loss for the offense). Alford continues to be a serviceable corner this season as he currently sits with a 74.1 overall grade for the season, his third-straight year with a grade between 74.0 and 76.0.

Clayborn tallied two pressures on 20 pass-rush snaps, giving him four total pressures (two hurries and two hits) over the last two weeks. The veteran edge defender racked up 17 pressures in a two-game stretch Weeks 10-11; he's had 29 total in his other 10 games. 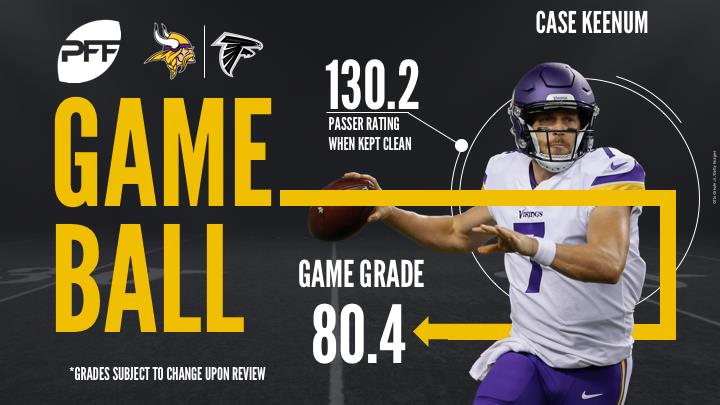