Todd Gurley carried the Los Angeles Rams past the Tennessee Titans, 27-23, pushing the Rams record to 11-4 and an NFC West division crown. Gurley totaled 118 yards on the ground, 158 yards through the air and two total touchdowns in the victory.

Rams quarterback Jared Goff threw four touchdown passes and 301 yards, while Gurley was his top target on the afternoon with 13 targets, 10 receptions as over half of his passing yards went to the running back. Titans QB Marcus Mariota finished the day with 275 passing yards but without a touchdown and a costly interception. With that, we give you our PFF-exclusive takeaways from the contest for each team.

A solid day for Goff who, outside of one fumble, was safe with the ball while showing his ability to move the ball downfield. He wasn't helped with two big drops (one on a deep shot downfield and another on an early third down) and he wasn't overly accurate on throws underneath (9-of-16 on throws between 0-9 yards) but this Goff is part of the winning formula in LA.

If you ever doubted who this offense ran through, this game answered that for you. Gurley was the difference-maker in this game, with his decisiveness in his cuts as the key to the Rams running game going for 119 total yards (all but one of them belonging to Gurley). Not just that, but in the play of the game, he went 80-yards on a screen pass to put six points on the board, just one of his 10 catches to cap a 250-plus yard day from scrimmage.

A remarkable rookie year continues and the impact of the new addition to the Rams secondary should not be overlooked. The former Boston College man has surpassed expectations of any rookie third rounder, finishing second on the team with three defensive stops in this one while also breaking up a pass in coverage.

For anyone else a great game. For Aaron Donald, one of his slower efforts of the year. The Titans largely kept him in check but he still managed to walk away with a sack, three hurries and a forced fumble. He's just that good.

There was plenty to like about Mariota but it was jarring that he lacked the poise of the more inexperienced quarterback opposite him. Mariota did throw some nice balls into tight sideline coverage, but he also had a terrible interception early and panicked on more than a few occasions in the pocket, leaving it without pressure and in the process creating pressure for himself. It hasn't been a bad 2017 for the former Oregon Duck, but he hasn't reached the heights many hoped this season could hold.

That was the receiver Titans fans were expecting to see all year. Davis set a career-best with 91 yards and showcased some of his talents. His best play came after outrunning Troy Hill and then dragging defenders for additional yards after the catch in the first quarter He also showed some nice footwork with a sideline grab in the second half. Plenty to be excited about in 2018 if this can act as a springboard going forward.

Casey picked up a hit (that was almost a safety) and a hurry, but it was his work in the run game that really stood out. He finished with three defensive stops and proved nearly impossible to block one-on-one against Los Angeles.

It's been a solid but unspectacular year rushing the passer for Orakpo, though with just one hurry against Andrew Whitworth, this represented one of his worst efforts of the year. He was better in the run game (five defensive stops, to lead team) but there's not been enough this season to say the Titans are a team who doesn't need to look at upgraded their pass-rush in the offseason. 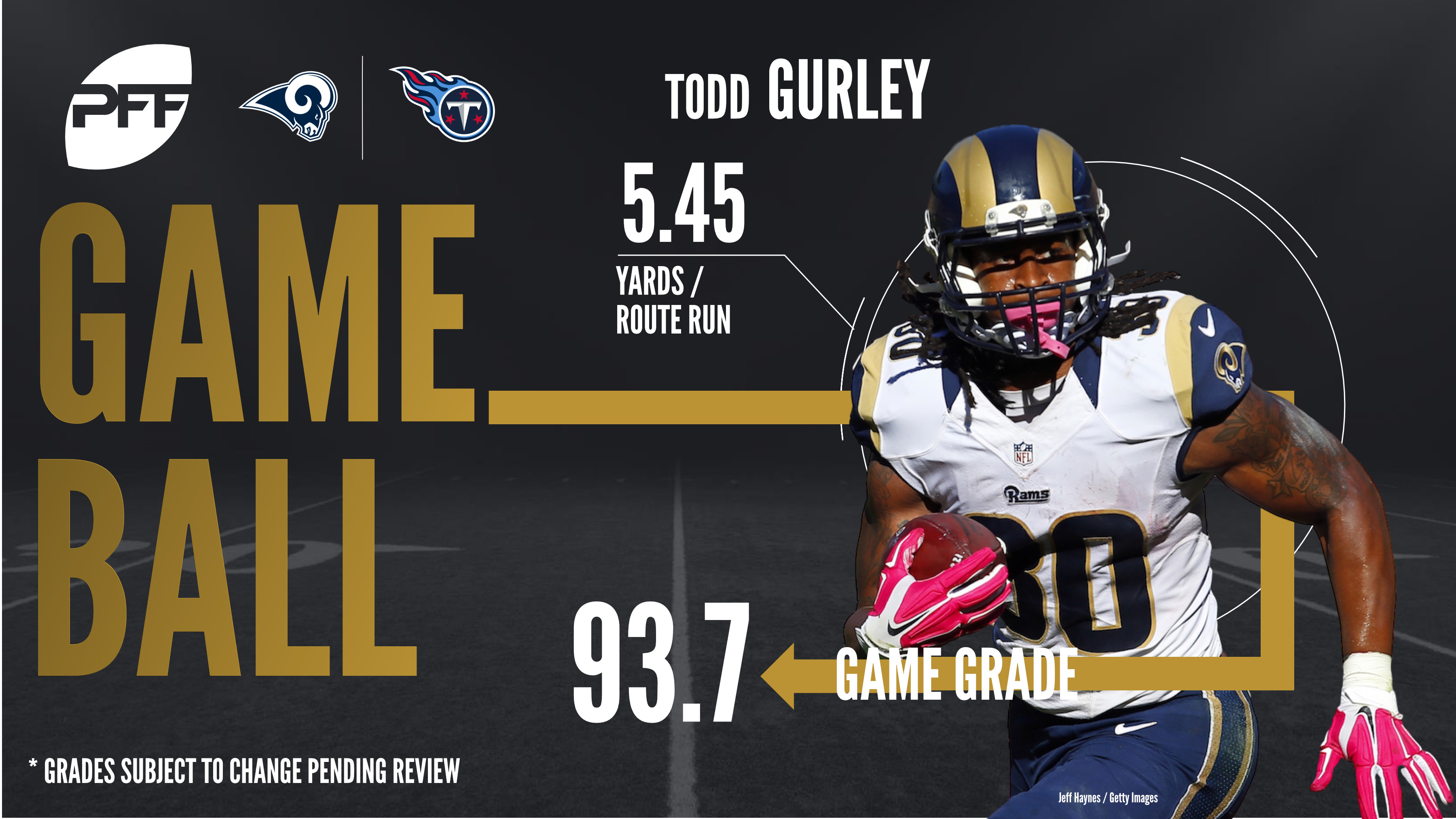