In a battle teams playing without their starting quarterbacks, the Houston Texans outlasted the Arizona Cardinals, 31-21, on the heels of strong performance on the ground for Houston. Both Texans running backs Lamar Miller and D'Onta Foreman found the end zone in the game, as Miller hauled in a receiving touchdown from Texans QB Tom Savage, while Foreman scored two fourth quarter rushing touchdowns to take the lead and ultimately secure the victory.

Savage completed 22-of-32 passes for 230 yards and two touchdowns, one to Miller and another to Pro Bowler DeAndre Hopkins. Foreman and Miller each ran for 65 and 61 rushing yards in the contest respectively.

The vaunted Texans defense did allow Cardinals third-string QB Blaine Gabbert to throw three touchdowns but forced three turnovers from the Cardinals offense, including two Gabbert interceptions. Future Hall of Fame wide receiver Larry Fitzgerald showed his continued worth on the Cardinals offense by racking up nine receptions for 91 yards and a touchdown, but it wouldn't be enough as the Cardinals fell to 4-6. With that, we give you our PFF exclusive takeaways from the contest for each team.

Hopkins was once again QB Tom Savage's favorite receiver as he led the Texans with eight targets, including seven in the coverage of CB Patrick Peterson. Hopkins had mixed results against Peterson, as he came three of his seven targets for 65 yards and a touchdown in the coverage of Arizona's elite cornerback.

Miller had a difficult afternoon running with the football, as his offensive line provided him just 10 yards before contact on his 22 runs. Nevertheless, Miller averaged 2.36 yards after contact and broke two tackles on the day. However, he really impressed as a receiver, he caught four of his five targets, including an athletic sideline reception in the end zone.

Clowney had a sack, a hit and a hurry on 37 pass-rushing snaps in the game, but was also an absolute monster in the running game. Too much for anyone the Texans lined up against him one-on-one, he finished the game with a 90.4 run-defense grade, and registered two tackles, one resulting in a defensive stop.

Pleasant saw plenty of targets in coverage in the game, with six passes coming his way. Four resulted in receptions, going for 38 yards, but the two that didn't result in completions came in the form of a pass breakup and a crucial interception.

Until the final two drives for the Cardinals, Blaine Gabbert was actually fairly efficient, and while he didn't attempt a single pass of over 19 yards in the air, he did have nine completions of throws between 10 and 19 yards. Both interceptions in the fourth quarter were poor though, forcing the ball to receivers who were covered and ultimately resulting in two easy, and costly interceptions.

Scoring two touchdowns despite playing just eight snaps, undrafted free agent Ricky Seals-Jones gave the Arizona coaching staff plenty to think about with regards to playing time down the stretch. Obviously his small sample size means that nobody should get too carried away, but he averaged a whopping 10.8 yards per route run and was targeted on every passing snap he was in the game for.

Arizona's rookie safety had a game for the ages as he made plays all over the field. Baker was targeted in coverage three times and while he did allow two receptions, they only went for 18 yards and he also had a pass breakup. However, what really led to Baker's exceptional grade was his run defense and pass-rushing work, as he kept making plays around the line of scrimmage. The rookie safety's signature play came on a blitz when he beat right tackle Breno Giacomini off the edge, strip sacked Savage and then recovered the ball.

Similarly to fellow rookie Budda Baker, Reddick also impressed in the Cardinals' loss against Houston. The former Temple player was on the field for just 15 snaps and was rushing the passer on 12 of them; however, he was still able to make an impact as he frequently beat blockers, which led to a quarterback hit and a hurry on the day. 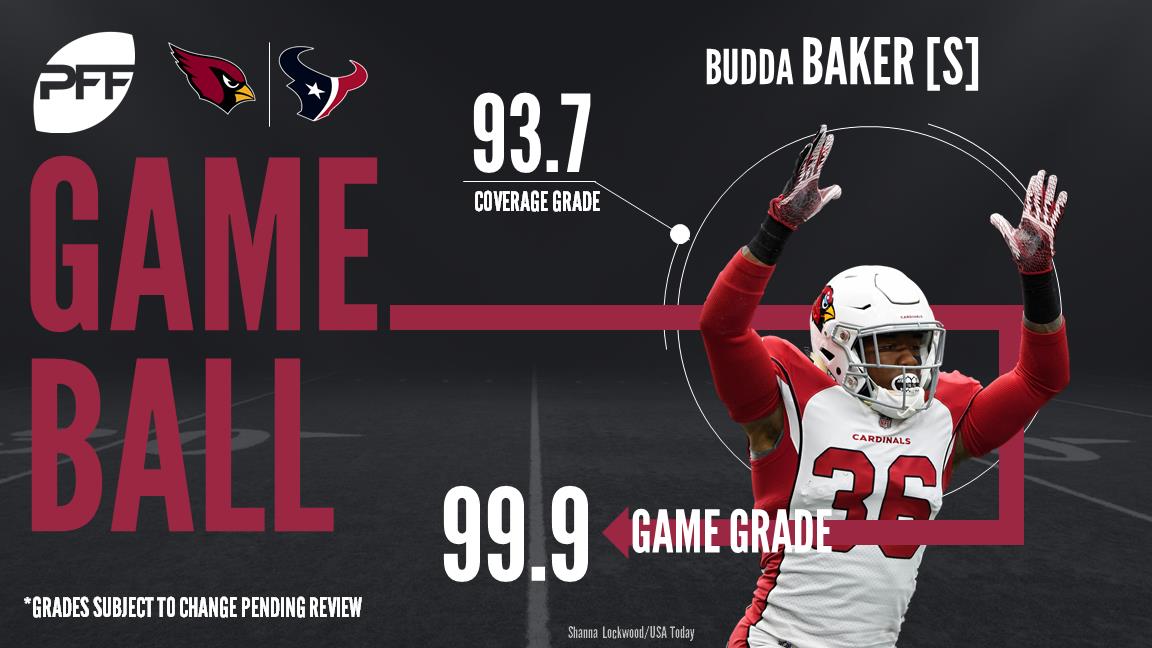