The Detroit Lions stifled the Chicago Bears offense and came away with the 20-10 victory at Ford Field.

QB Matthew Stafford enjoyed a good game, going 25-of-33 for 237 yards and throwing two touchdowns. The Lions' stable of backs produced 92 yards on the ground, with RB Theo Riddick leading the way with 49 of those yards.

QB Mitchell Trubisky struggled on the day, going 31-of-46 for 314 yards, throwing one touchdown versus three interceptions. He also fumbled but managed to recover the ball. He didn't get much help on the ground, as RB Jordan Howard only managed 37 yards on 10 carries.

CB Darius Slay had himself an interesting game, picking off two of Trubisky's three interceptions. With that, we give you our PFF-exclusive takeaways from the contest for each team.

Stafford's downfield gains were limited to an exceptional catch on a broken play by Marvin Jones, but Matthew Stafford was on point with his passing at the short and intermediate levels and kept the Lions' passing game ticking throughout the victory. Stafford only had three incompletions on 23 passes aimed within 10 yards of the line of scrimmage and added to that with some quality passing to the intermediate level, highlighted by his touchdown pass to Eric Ebron on a double move that ultimately put the Lions out of reach of the conservative Bears.

With Joe Dahl picking up his first start next to him at left guard, Decker turned in his best game since his return from injury in Week 10, allowing only two hurries against the Bears. Decker hasn't quite hit the heights of his rookie season so far, but even allowing 17 pressures (one sack, two hits, 14 hurries) in six starts, his presence at left tackle has been a clear upgrade over the first eight games of the season, where the pair of Greg Robinson and Brian Mihalik allowed 38 pressures on Matthew Stafford's blindside.

This wasn't a typical shutdown game from Slay, as he still yielded an uncharacteristic 60 yards in his coverage. At the same time though, his two interceptions and one pass breakup more than made up for it. Slay is now among the 10 highest-graded corners in the NFL.

It was a career day for Davis, who made his presence felt in the running game. From the first play of the game, when he took on fullback Michael Burton in the hole for a stop, Davis was all over the Lions' running backs. When it was all said and done, Davis would finish with three stops on the day.

Trubisky's performance really highlighted the good and the bad of his rookie season so far. When the offense opened up towards the end of the game, you could tell why Trubisky was a top-two pick. He zipped in a handful of throws into tight windows in the intermediate range. At the same time though, he whiffed high on a few throws – one a costly interception – on throws outside the numbers. Then there was the head-scratching red-zone interception where it looked like Trubisky never even saw Quandre Diggs. That was as bad a rookie mistake as one can make and ultimately cost them a chance to win this one.

When your quarterback and running back have grades this low, it's going to be tough to win football games. He didn't break a single tackle on 10 carries and averaged only 1.6 yards after contact.

After a couple of rough weeks against the Eagles and 49ers, Jackson has rebounded with some of his best form over the last two weeks. He tied a season high with three defensive stops, stepping up to limit the gains on the Lions' short passing attack and fill gaps in the Bears' defensive front against the run.

Hicks had his 11th multi-pressure game of the season and his 12th multi-stop game in 2017; while the Bears continue to struggle in the win column, Hicks continues to shine on the defensive line. Hicks has shown the ability to be a threat on the defensive line since he entered the league with the Saints, but he has become a more consistent contributor every season and with two games to go he only needs one sack, three hits and five hurries to set career highs in sacks, hits, hurries and defensive stops. 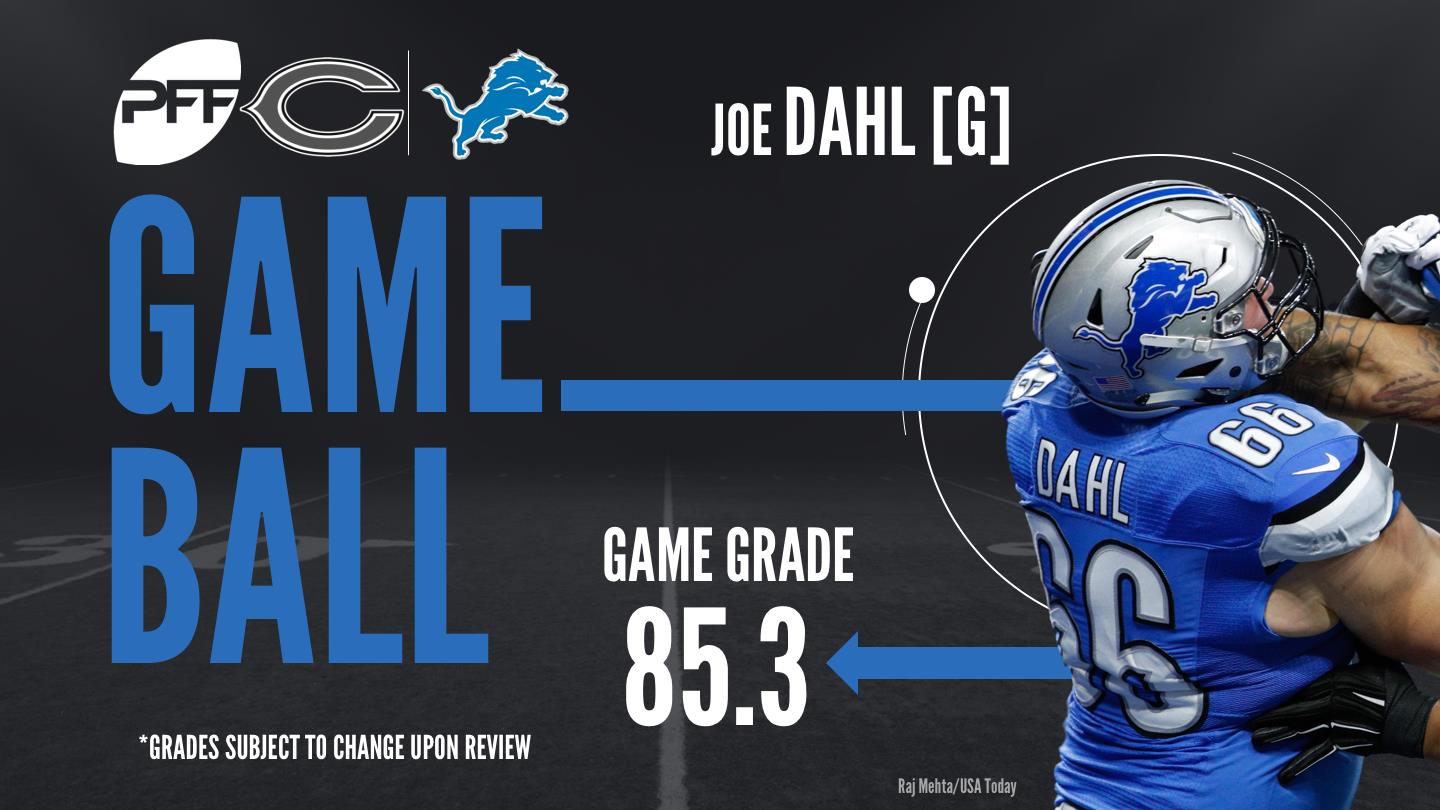