GLENDALE, AZ - SEPTEMBER 25: Offensive guard Zack Martin #70 reacts with quarterback Dak Prescott #4 of the Dallas Cowboys after scoring on a ten yard run during the second quarter of the NFL game against the Arizona Cardinals at the University of Phoenix Stadium on September 25, 2017 in Glendale, Arizona. (Photo by Jennifer Stewart/Getty Images)

The Cardinals opened the scoring with QB Carson Palmer throwing a touchdown pass to WR Jaron Brown, however the Cowboys would respond late in the second quarter when QB Dak Prescott would run for a score of his own.

In the second half, old staples WR Larry Fitzgerald and WR Dez Bryant would score for their respective teams, but a WR Brice Butler receiving touchdown and a HB Ezekiel Elliott rushing score would prove to be the difference, and the Cowboys would go on to win 28-17. With that, we give you our PFF exclusive takeaways from the contest for each team.

Butler did a lot despite playing very little. He had two catches for 90 yards, and both were massive plays for the Cowboys. There was his beautiful touchdown grab that he made through contact, and then the 53-yard catch late in the game that helped the Cowboys seal the win. What's most impressive is that Butler did this despite running just three pass routes the entire game. His 30.0 yards per route run average for the game was easily the highest in the league this week, and should help him get a few more snaps in the future.

While Elliott's overall grade might seem low (thanks to a low receiving grade), his run grade of 73.1 is more in line with what he looked like in this game. Elliott had essentially zero help from his offensive line all night, so the fact that he finished with 80 yards rushing is fairly remarkable. He actually had 82 yards rushing after first contact, as on average he was contacted behind the line of scrimmage tonight. He forced three missed tackles, and really turned it on late to help Dallas seal the game.

Lawrence was a menace all night against the Cardinals. He concluded Week 3 with a pass-rush productivy of 23.2, which was first among all qualifying pass-rushers. His three sacks came from the left side, where he did most of his work against RT Jared Veldheer. Lawrence finished with a staggering 12 total pressures, three by way of sack, three quarterback hits and six quarterback hurries.

Rookie CB Jourdan Lewis and S Byron Jones both finished with coverage grades above 84. They were targeted a combined 18 times in coverage and surrendered only 9 catches. They combined for three pass break ups, with Jones responsible for two of them. The athletic Jones was tasked much of the night with handling Cardinals TE Jermaine Gresham and only allowed two receptions for 21 yards while covering him.

On a night where they averaged only 2.3 yards per carry on 21 attempts, the Cardinals relied heavily on QB Carson Palmer. He played efficiently on his way to a 71.3 grade and did most of his damage when not blitzed, completing 23 of the 38 attempts for 255 yards and two touchdowns. Palmer was pressured often, as he was under pressure on 23 of his 55 dropbacks.

Fitzgerald showed he still has plenty of playmaking ability. He was targeted 15 times and caught 13 of those for 149 yards with 44 yards coming after the catch. Fitzgerald may have started a bit slow in the first two weeks, but he'll hope his 81.7 receiving grade against the Cowboys will propel him to a string of solid performances.

Branch was all over the field on Monday night, making plays for the Cardinals defense and finishing with the highest grade of the night. He made three solo run stops, which was good for a run-stop percentage of 13.6 percent, fifth among safeties this week. He also made three solo stops in the passing game, as he allowed just three catches on five targets for a mere four yards total.

The Cowboys interior offensive line had a heck of a time trying to block Peters all night, especially in the run game. On 19 run-defense snaps, Peters made four solo run stops. His run stop-percentage of 21.1 percent was the second-highest among interior defenders this week, and he now ranks tied for seventh at his position on the season with six solo run stops. Peters also added a quarterback hurry rushing the passer. 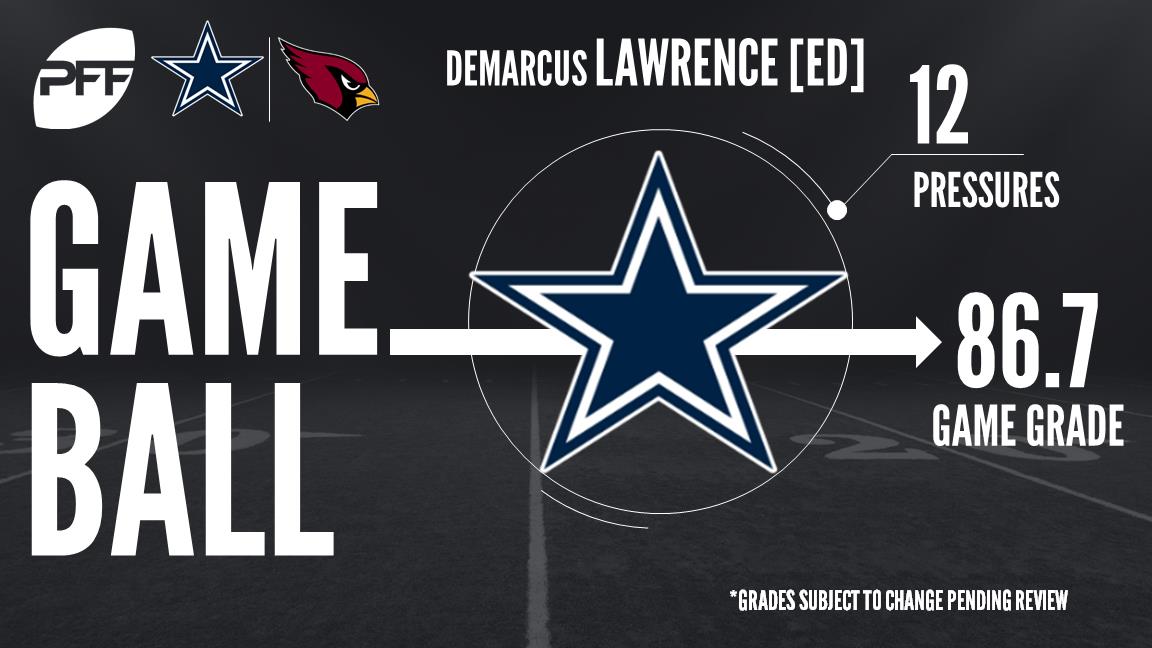