The Arizona Cardinals shut out the New York Giants at University of Phoenix Stadium, winning the game 23-0 in their last home game of the season.

QB Eli Manning was 27-of-45 for 263 yards, throwing two interceptions and did not throw a touchdown pass. He also fumbled twice and lost one. He received precious little help on the ground, as the Giants running backs only managed to gain 38 yards on 19 carries on the day. RB Wayne Gallman was able to chip in 44 receiving yards however.

QB Drew Stanton was 20-of-34 for 209 yards, throwing two touchdowns and two interceptions in the game. His main target was WR Larry Fitzgerald, who caught nine passes for 119 yards and scored a touchdown in what was hopefully not his last home game of his career.

Stanton failed to connect on any of his three attempts that traveled at least 20 yards in the air, including one pass that he just forced into double coverage to Larry Fitzgerald that was picked off in the end zone. He was especially sharp however at the intermediate range, completing 8-of-10 attempts on balls that traveled between 10 and 19 yards in the air for a total of 122 yards and both of his touchdowns.

It was pretty clear right from the start that Stanton was going to lock in on his future hall-of-fame receiver and Larry Legend certainly delivered. Fitzgerald hauled in nine of 15 targets and did most of his damage before the catch, picking up 88 of his 119 receiving yards before the catch. The Cardinals star receiver is clearly the key that makes the Cardinals offense go and he was vitally important in this one, eight of his nine catches resulted in either a Cardinals first down or touchdown.

Bethea had himself a fantastic game for the Cardinals defense, and his game-high grade reflects that. Bethea was effective against the run, as he made a solo run stop and had multiple run-altering plays that contributed to his 85.3 run-defense grade. But it was his coverage where he really stood out. Bethea finished with a 92.6 coverage grade as he provided great deep safety help over the top all game long. He topped it off with two interceptions, the first being an unbelievable play to not only read the throw but to actually get there in time and make the interception.

While Bethea did most of his damage in the pass game, Baker was remarkable as a run-stopping safety-linebacker hybrid. He made five solo run stops in this game which led to a league-high 26.3 run-stop percentage for safeties on the day. He finished with a perfect run-defense grade of 99.9. He also was effective in coverage, breaking up a pass and allowing just four completions for 48 yards on six targets.

There were not a lot of bright spots for the Giants offense in this game, but RB Wayne Gallman was one of them. While his rushing numbers are disappointingly low at 18 yards on 10 carries, one must take into account that he averaged just 0.3 yards before contact per carry. He managed to break two tackles while running, but he had next-to-no open space. He was more effective when he caught the ball out of the backfield, averaging 1.43 yards per route run and forcing four missed tackles.

Manning's disappointing season continued with this game, where he just never got it going for the Giants offense. He made a few great throws at times, but those were stuck between some pretty bad misses. Manning really struggled when the Cardinals got pressure on him in this game. On plays where he was pressured, Manning completed just 3-of-9 passes for 40 yards and had a bad interception. It's clear he misses Odell Beckham Jr.'s deep play ability, as he was just 1-of-5 for 21 yards and two interceptions on 20-plus yard throws.

Pierre-Paul was quite active in the pass-rush, getting to the quarterback six times (one sack, one hit, four hurries) on 33 pass-rush snaps, and he also had another hurry that was nullified by a penalty. This was one of the better games in what has been a fairly disappointing for the Giants star edge rusher, he currently ranks 49th among edge defenders with a 77.1 overall grade. He hasn't finished a season with an overall grade below 83.5 since he posted a 74.6 back in 2013 – a season where he was limited to just 583 snaps.

One of the brightest spots this season for the Giants has undoubtedly been the play of their rookie interior defender, who did what he's done all season long in Week 16, which is stop the run. Tomlinson tallied two run stops to go with a team-high run-defense grade of 88.2. For the season now he ranks 17th out of 124 qualified interior defenders with a run-defense grade of 86.2. 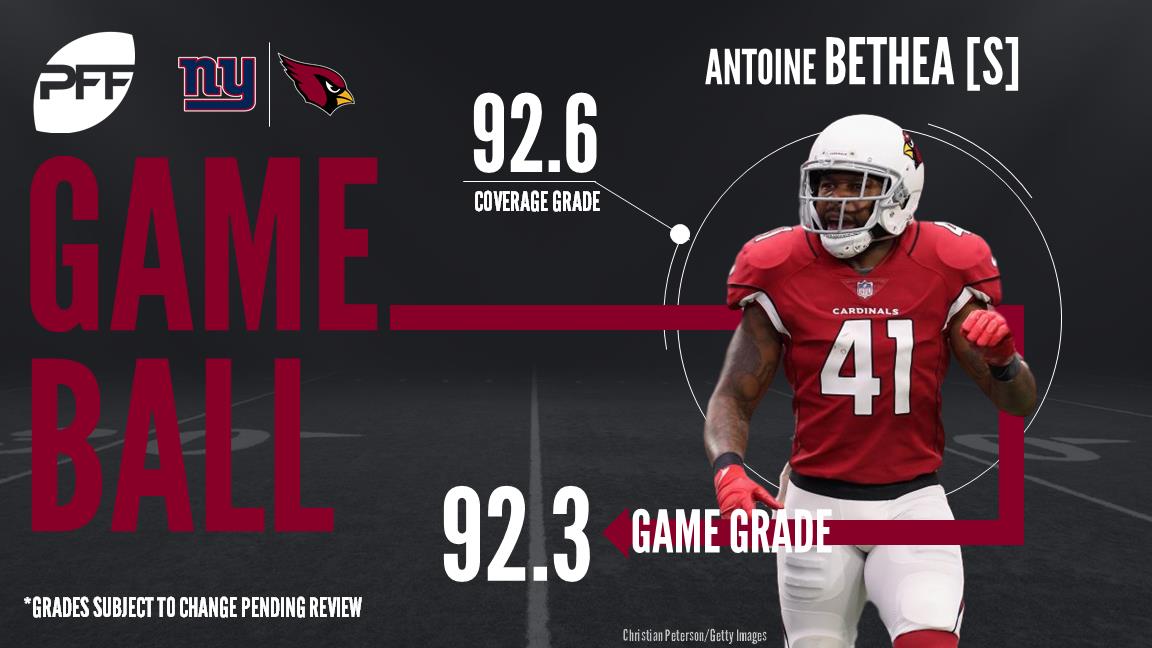