INDIANAPOLIS, IN - AUGUST 27: Andrew Luck #12 of the Indianapolis Colts gets sacked by Beau Allen #94 of the Philadelphia Eagles in the first quarter of an preseason NFL game at Lucas Oil Stadium on August 27, 2016 in Indianapolis, Indiana. (Photo by Joe Robbins/Getty Images)

Here are the top-graded players and biggest takeaways from the Eagles’ 33-23 preseason Week 3 victory over the Colts:

Solid grades for both Eagles QBs

Sam Bradford has a secure starting position for the time being, putting together a nearly-flawless two quarters and some change of playing time. He had the one interception, but that was due to a drop by WR Nelson Agholor; even if the pass placement isn’t perfect, Agholor needs to make those plays to live up to his first-round draft status. Head coach Doug Pederson seems to have brought his short-to-intermediate game from Kansas City, as Bradford has attempted just three passes over 20 yards on 40 pass attempts this preseason. The Colts' pass-rush was mostly held in check, as Bradford was pressured on just 19 percent of his dropbacks. Chase Daniel had much of the same freedom, and he excelled with no pressure, recording a 141.1 passer rating. Both passers utilized the quick-passing game efficiently, with Bradford completing 9 of 10 passes and 143.8 passer rating when throwing under 2.5 seconds.

LT Jason Peters (45.7) had a “dress rehearsal” he’d like to forget, as he graded poorly in both run blocking and pass protection; he allowed two pressures, including a hit to Colts OLB Trent Cole. C Jason Kelce was solid in the run game, while converted center-to-guard Stefan Wisniewski continues to show well in pass protection, but struggle to open up running lanes. Soon-to-be-suspended RT Lane Johnson didn’t get third- and fourth-team players to push around, as he was beat a couple of times in the run game. While the OL was able to stymie the Colts' pass-rush for most of the night, their inability to get much push in the run game is troublesome for a team that only gave their running backs 1.81 yards before contact per attempt in 2015—a number they failed to reach against the Colts.

LB Nigel Bradham’s career has been in decline since playing well as a backup in 2013, but he made his presence known in Saturday night’s game, notching two defensive stops and clogging running lanes, forcing the HB to cut elsewhere. MLB Jordan Hicks tore his pectoral in 2015 after a promising start to the season. Hicks struggled in the first two preseason games of 2016, but found an edge against the Colts, especially as a pass-rusher, recording a QB hit and hurry on just seven pass-rush snaps.

Constant pressure leads to an average night for Andrew Luck

In 2015, Andrew Luck was pressured on 39.9 percent of his dropbacks, the sixth-highest rate in the NFL, but since the Colts passed more than any other team, Luck was pressured 109 times in just seven games with 29 knockdowns (hits plus sacks). This ultimately led to Luck’s demise, as he ranked second to last in adjusted completion percentage when under pressure, and missed nine games due to injury. Luck has been pressured on 40.6 percent of his dropbacks this preseason, and it got worse against the Eagles, as he was pressured on 54.5 percent. C Ryan Kelly was drafted to help shore up the leaky O-line, but even he surrendered a sack and two hurries. Despite being under duress, Luck didn’t put the ball in harm’s way, and was on target on 76.5 percent of his passes.

Each member of the starting offensive line allowed pressure, but the biggest culprit of the night was rookie RT Le'Raven Clark, earning a pass-blocking grade of 31.4 and allowing three hurries and a hit, all of which he was beaten badly on. RG Denzelle Good allowed a hit and a hurry while Kelly gave up the three pressures aforementioned. LT Anthony Castonzo and LG Jack Mewhort fared well in pass protection, giving up a hurry each, but the bad news of the night is that Mewhort may have torn his ACL. In the run game, the Colts as a team gained a total of 37 yards, but had 57 yards after contact, which means they averaged -1.11 yards before contact per attempt. The Colts running backs had no room to operate.

Low grades for Colts' first-team defense, though many starters held out

Backups Frankie Williams and Josh McNary looked good in the second half, but outside a couple of notable plays by OLB Trent Cole, CB Darius Butler, and LB Nate Irving, the Colts' first-team defense struggled. Interior defenders Henry Anderson and Kendall Langford, CBs Patrick Robinson and Vontae Davis, and OLB Robert Mathis are five major impact players that did not see the field, and it showed in the results. Rookie S T.J. Green had a rough night, as he allowed a passer rating of 94.4 into his coverage, and OLB Erik Walden failed to make an impact as a pass-rusher. As always, preseason games are to be taken with a grain of salt when evaluating the potential of the team for the regular season.

Get ready for the Colts’ 2016 regular season by checking out our Indianapolis team preview (click the image below). 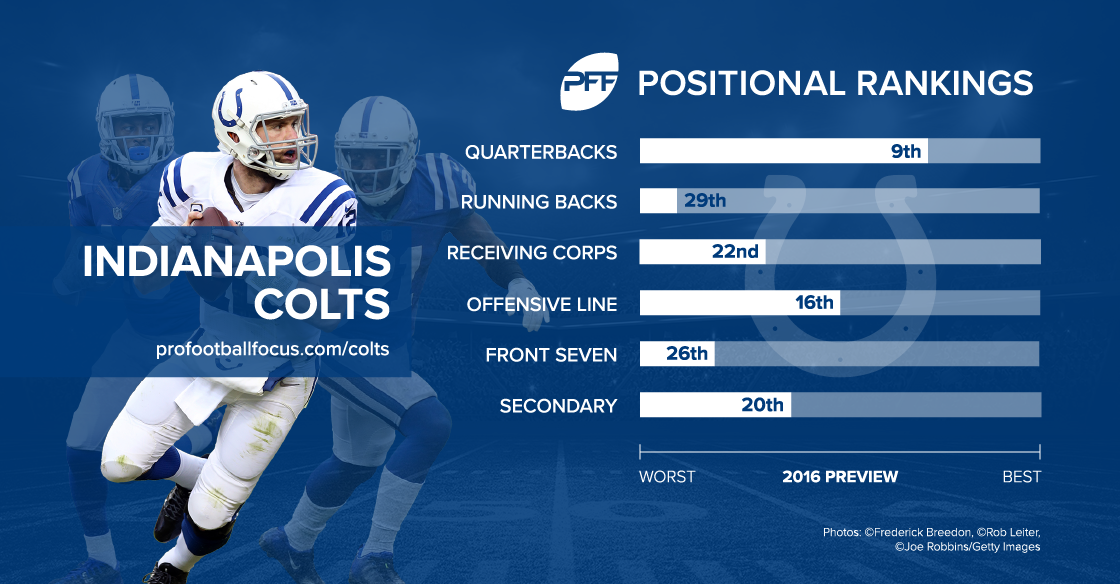