Outside of one MNF game, the second week of preseason is now in the books, so we at PFF have put together our second NFL Team of the Week to highlight outstanding performances at every position across the league. 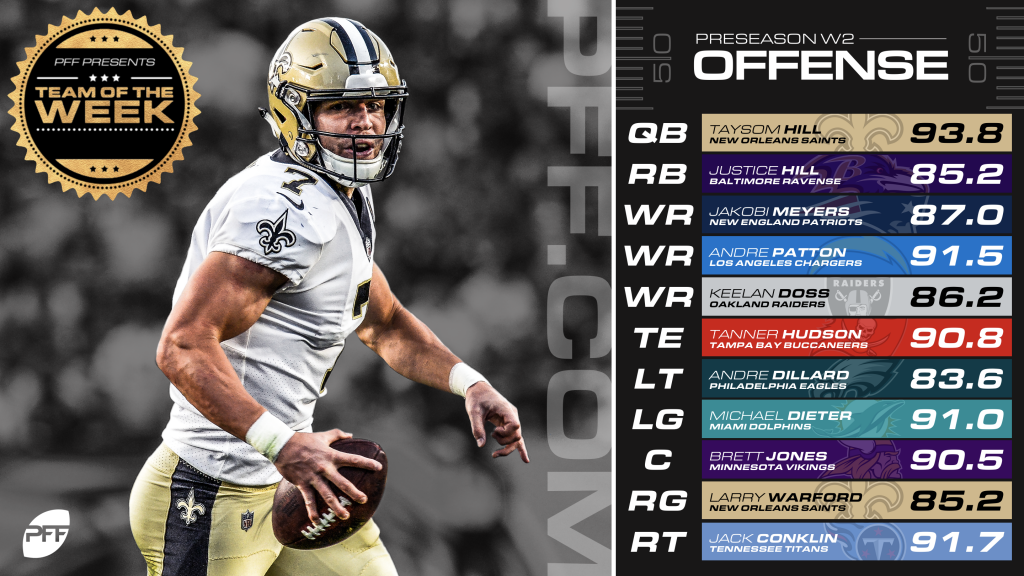 Usually, when people are talking about Hill, they are talking about the way the Saints use him as a gadget player on offense, but in the Saints' win over the Chargers on Sunday he made some nice throws. He went three-for-four for 56 yards and a touchdown on throws traveling 10-plus yards downfield and forced four missed tackles on the combination of three designed runs and two scrambles.

Hill was a nightmare for the Green Bay Packers to try to bring down in the second week of the preseason, totaling seven missed tackles forced from just 10 carries. While Hill averaged 4.9 yards per carry on the night, a whopping 43 of his 49 rushing yards came after contact.

The emergence of Jakobi Meyers has been one of the top stories of the preseason so far, and that continued this week. Picking up 82 yards from 27 snaps on the field as a receiver, his average of 3.04 yards per route run on the week was the second-highest among receivers who played over 20 passing snaps.

Patton was one of the most efficient receivers in the league this week, catching all four passes thrown his way for 62 yards and a touchdown. He averaged 4.77 yards per route run in the game against the Saints, the highest mark among receivers who ran more than 10 routes in Week 2 of the preseason.

Doss was on the field for just 11 snaps as a receiver but was very efficient on those snaps. Catching all five passes thrown his way, he averaged 3.45 yards per route run, ranking fourth among all receivers with at least five targets this week.

Speaking of efficient, Tampa Bay Buccaneers tight end Tanner Hudson had one of the top performances of the week in their game against the Miami Dolphins. With six catches for 93 yards, his average of 3.21 yards per route run was the best mark among the tight ends who ran more than 10 routes this week.

Dieter allowed a sack in the Dolphins game against the Buccaneers, but that was the only pressure he gave up on the night. He stood out as a run-blocker, producing a PFF run-blocking grade of 89.9, and overall, he bounced back from a rough first outing against the Atlanta Falcons last week.

Jones was on the field for 52 snaps on Sunday and produced the best performance of any center this week. From 29 pass-blocking snaps, he didn’t allow a sack, hit or hurry. He was even more impressive as a run-blocker, producing a PFF run-blocking grade of 90.0 to top all other players at the position.

Warford was on the field for 20 snaps on Sunday and delivered both in pass protection and as a run-blocker. He produced a 100.0 pass-blocking efficiency rating, with zero sacks, hits or hurries allowed from 10 pass-blocking snaps.

Conklin played just 18 snaps for the Titans this week but looked really impressive on the field. He allowed one hurry in 12 snaps in pass protection, and he had some impressive blocks in the running game, both at the line of scrimmage and at the second level. 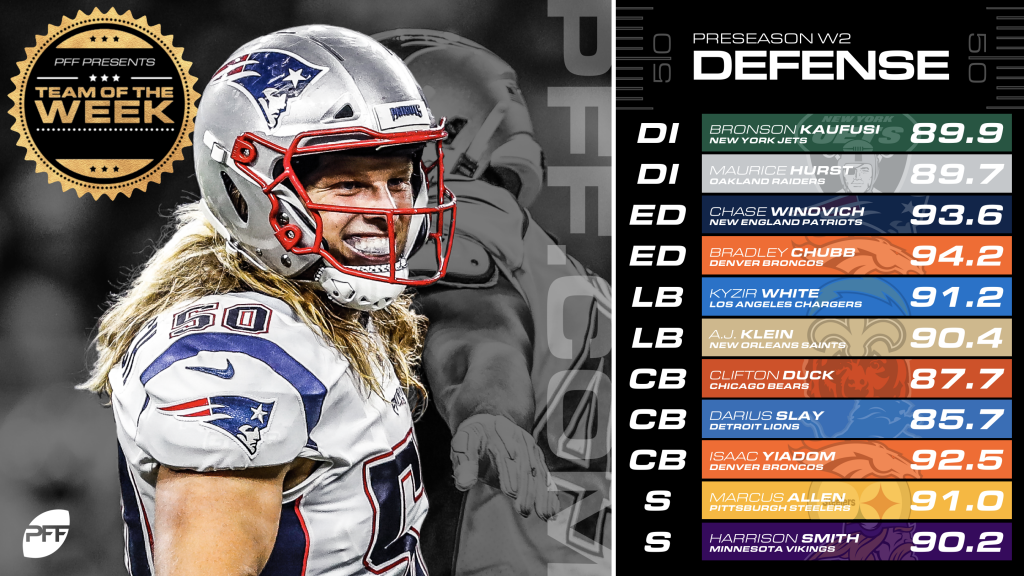 Hurst was on the field for 16 pass-rushing snaps this week, registering a hit and two hurries. It’s been an impressive season from Hurst so far, who is looking to build upon a solid rookie campaign that saw him produce a PFF grade of 72.4 on 472 snaps after falling to the fifth round of the 2018 NFL Draft.

Kaufusi was impressive against both the run and as a pass-rusher for the Jets this week and saw time both inside and on the edge. As a pass-rusher, he picked up a sack and two batted passes. This was the type of performance he needed as he looks to force his way onto the field more in 2019.

Chubb rushed the passer just six times in the Broncos game against the San Francisco 49ers, but he still registered a hit and a sack, with the added bonus on a forced fumble on the sack. On top of that, both of his tackles in run defense resulted in a defensive stop.

Winovich fell all the way to the third round of the 2019 NFL Draft, and his selection by the Patriots feels like even more of a potential steal after his performance this week. On the field for 32 pass-rushing snaps, the former Michigan star racked up a sack, a hit and six hurries, averaging a pressure once every four pass-rushing snaps.

White was the primary coverage defender on four passing plays on Sunday and allowed just seven yards on two receptions. He also had a pass breakup and finished the game with two defensive stops.

Klein played 21 snaps in the Saints' win over the Chargers on Sunday and impressed both in coverage and against the run. In coverage, he had an interception and allowed just six yards on two targets while finishing the game with a tackle that resulted in a defensive stop.

Yiadom was on the field for 12 coverage snaps for the Broncos on Monday night and finished the game having allowed a 0.0 NFL passer rating on throws into his coverage. So far this preseason, he has been on the field for 47 coverage snaps, allowing one reception for 21 yards on seven targets. With a pass breakup and an interception, his NFL passer rating allowed for August also sits at 0.0.

It wasn’t a perfect performance by the undrafted free agent out of Appalachian State, with two missed tackles on the night, but he did look impressive in coverage. Targeted three times, he allowed just one reception for eight yards and came away with an interception. All told, he allowed a passer rating of just 2.8 on throws into his coverage.

Given that he was only on the field for 17 coverage snaps, it’s surprising that Slay was targeted three times this week. He proved why it is foolish to go after him that often though, allowing zero receptions and coming away with a pass breakup.

After a rough first outing for the Steelers last week, third-round draft pick Justin Layne bounced back in their second game of the summer. On the field for 21 coverage snaps, he didn’t allow any receptions and had a pass breakup on two targets.

A fifth-round draft pick out of Penn State a year ago, Allen mirrored his defensive back teammate Layne in bouncing back from a poor performance in the opening week of preseason action. He recorded a pass breakup in coverage and has now made five solo tackles this preseason with zero missed tackles.

Smith was on the field for just 17 snaps on Sunday but still made his presence felt. In coverage, he had a pass breakup, while his lone tackle of the day resulted in a defensive stop. He has played just 32 snaps this preseason but looks ready for another big year.

A week after his backup was named on the PFF Team of the Week then traded for a fifth-round draft pick, Justin Tucker makes his return to the list. He converted all four field goal attempts, including one from beyond 50 yards. Something tells us that he won’t follow the pattern and wind up being traded this week, though…

Punting six times in the Packers' game against Baltimore, J.K. Scott averaged 5.05 seconds of hang time per punt and saw three of his six kicks land inside the opposing 20-yard line.

Pope had two punt returns for the Chargers in their game against the Saints this week, returning one for 10 yards and the other 81 yards to the house.

An impressive performance in the third phase for Nelson this week saw him register a tackle, draw a holding penalty and force a fumble. Not bad for five snaps on special teams.