When the league changed the touchback on kickoffs from the 20-yard line to the 25-yard line in 2016, it took only a short time for the smart teams to adapt, and many never did. With my interest in the kicking game increasing during this period, so too did my lack of amazement at the continued misunderstanding of the arbitrage this rule was affording teams during what is, clearly, the least talent-dependent of the offense, defense, special teams triad of football.

Let’s take some inventory of what has transpired since the rule change. Of all non-onside kickoffs from the 35-yard line from 2016 to 2017, over 70% were kicked at least a yard into the end zone. Of these end zone kickoffs, just under 19% were returned, and only about 29% of those returns earned a starting field position of the 25 or better, each of which generated an additional 0.30 expected points for the kickoff team each time. It is true that you miss every shot you don’t take, but with less than a half-a-dozen returns for touchdowns on such kicks during those two years, taking the aforementioned shot seems a speculative bet (at best). 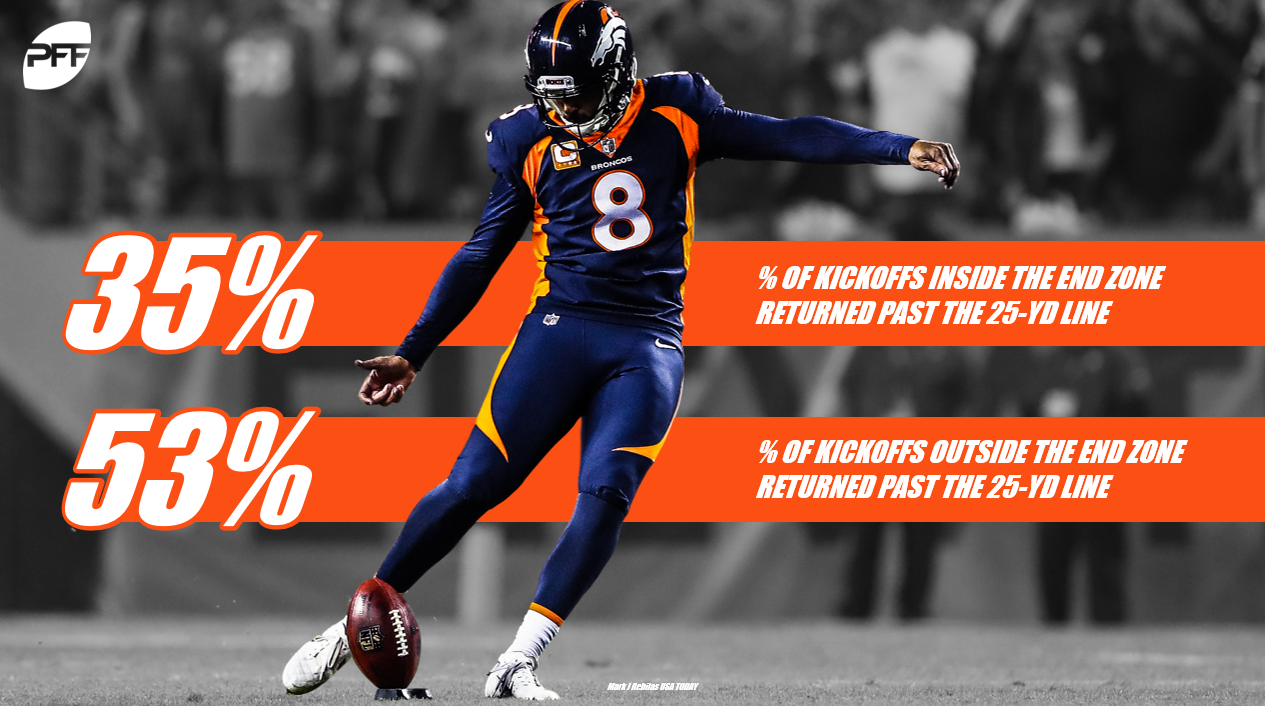 Kicks that landed short of the end zone were returned to the 25 or better fewer than 44% of the time, which suggests that the kicking team was also acting suboptimally in kicking it in the end zone so frequently. In 2016, Caleb Sturgis and the Eagles' kickoff team generated over 23 expected points by covering 41 of his 87 kickoffs and allowing an average starting field position of the 22-yard line. This is not a trivial amount. Cody Parkey was similarly good for the Dolphins last year, kicking a touchback on just 28 of 67 kickoffs, which yielded an average starting field position of the 21-yard line, which also earned his team over 24 expected points.

This season, they changed the kickoff rule once again, outlawing wedges by the return team and the running start by the kickoff team. How has that changed the dynamic so far this year? Well, prior to Monday night, almost 79% of kicks traveled at least a yard into the end zone – suggesting that the lesson learned above about the benefits of kicking it short have been outweighed by concern over the kicking team’s ability to cover without a head start.

The data suggests that they are not wrong in their conservatism – kicks that have landed short of the end zone have been returned to the 25 or further about 53% of the time, with a median expected points added the same as on a touchback. One of these short kicks was returned for a touchdown (by Tennessee’s Darius Jennings), and a consistent improvement in returns is apparent.

Returning the ball from the end zone (which happens roughly 16% percent of the time) has been more successful as well, but it is still is a sucker play. It's generating a return to or beyond the 25-yard line just 35% of the time and only two of those returns have gone over 90 yards. These returns cost their team about a fifth of an expected point, which over the course of, say, 20 kickoffs during the season, can result in four points, which is about a tenth of a win.

So, at the rough quarter point of the season, one thing is clear – the league changed a rule that resulted in the league acting in a more optimal way. Whether this happened by accident or on purpose is up for debate, but it is clear that we are entering a new era in NFL football: Teams are going for two more than ever, offenses are going for fourth downs in critical and non-intuition spots – and when they don’t (e.g., Dallas) they are getting roasted for it. Passing on first and 10 is up from less than 50% a season ago to more than 54% this season. It will be a lot of fun to see this ever-evolving league continue to change.