Both quarterbacks have come a long way since then. Goff went on to break the Pac-12 record for both single-season passing yards and single-season touchdown passes during his final season at the University California, all before he was selected with the first overall pick of the 2016 NFL Draft. Brady, on the other hand, went on to secure four more rings and set a whole host of NFL records, including the NFL record for most regular season wins by a starting quarterback (207), most playoff games started (39), most division titles (16), and most postseason wins (29) all while he was cementing himself as one of the greatest players ever to play the game.

When the two meet on Sunday for Super Bowl LIII, the 17-year difference between the quarterbacks will be the largest difference in a Super Bowl ever, but how do these two quarterbacks, who are at the opposite ends of their respective careers, compare statistically? Well, thanks to PFF's 2019 QB annual, we can find out.

All quarterback stats and screenshots in this story can be found in our QB Annual, released for PFF EDGE & ELITE subscribers. The QB Annual contains detailed profiles, exclusive signature stats, grades and much, much more. If you don't have EDGE or ELITE, you can sign up here, while existing subscribers can download the QB annual here. 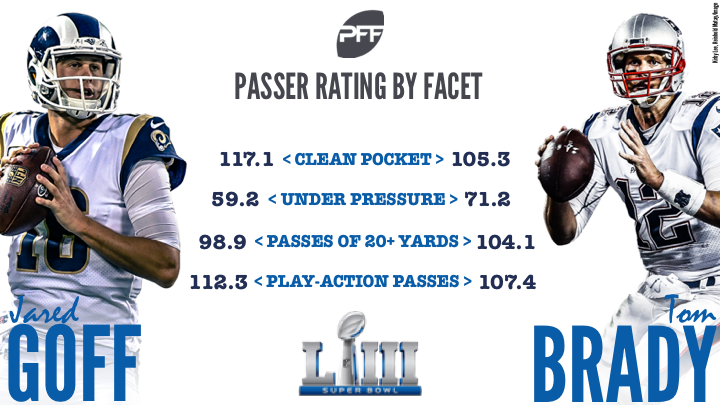 Performance from a clean pocket

Almost all of a quarterback’s season-long statistics are far less stable under pressure than they are when clean. This is understandable since a quarterback’s ability is far more isolated when he is kept clean than when he is pressured. This also explains some outlier seasons for quarterbacks that were not eventually sustained. For example, Brady's 96.6 passer rating when pressured in 2017 ranked first among quarterbacks and was more than 10.0 points higher than any other signal-caller. A year on, Brady secured a passer rating of just 71.2 from his pressured dropbacks, 15th among quarterbacks and more than 20.0 points fewer than his 2017 mark. Thus, when discussing a quarterback’s prowess when under pressure, one should consider these statistics as descriptive, and not predictive. To predict future quarterback success, using how well a quarterback performs when clean is likely to lead to more accuracy.

Los Angeles Rams quarterback Jared Goff finished the 2018 season ranked fourth among quarterbacks with a passer rating of 117.1 from a clean pocket, and through 17 regular-season weeks, he completed 296 of his 404 attempts for 3775 yards, 27 touchdowns, and seven interceptions while his 23 big-time throws (our-highest graded throws) from a clean pocket were the sixth-most among players at the position. However, as good as he was at making those big-time throws at a high rate (his 5.4 big-time throw percentage tied with Andrew Luck for the ninth-best rate in the league) he sometimes struggled with decision making, and he ended the year with 13 clean-pocket turnover-worthy throws, which tied with Mitchell Trubisky for the third-most among quarterbacks. If Goff and the Rams are to stay competitive against the Patriots, Goff will need to keep producing those big-time throws but cut down on the turnover-worthy plays.

New England Patriots quarterback Tom Brady was as clinical as usual from a clean pocket throughout the 2018 campaign, and he ended the year with his fifth straight clean-pocket passer rating north of 100.0. His 2018 mark of 105.3 ultimately fell 12 spots short of Goff among quarterbacks, but his big-time throw rate of 4.1% was just 1.3 percentage points shy of Goff's 2018 mark, while his clean-pocket turnover-worthy play rate of just 1.8% was head and shoulders above his counterpart's. 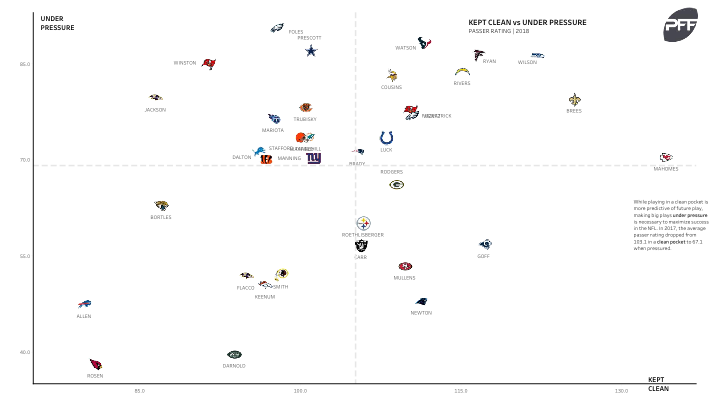 Brady completed 58 of his 128 pressured attempts throughout the regular season, for 743 yards, nine touchdowns, and just five interceptions, while his 71.2 passer rating on these throws ranked 21st among qualifying signal-callers. Age may not be catching up to Brady in some aspects of play, but a really telling statistic is his 4.7 turnover-worthy play percentage when under pressure, which is the second-highest rate of his career within the PFF era. Finding ways to pressure Brady in the pocket will be at the top of the to-do list for Wade Phillips and the Rams' defense.

Unlike Brady, Goff has struggled under pressure during his time in the NFL, and while his 56.8 passer rating under pressure this year may have narrowly beat out his rookie mark of 47.5, it still ranked in the bottom 10 among players at the position. Goff completed just 68 of his 157 pressured attempts this season, and his completion percentage of 43.3 percent was good for 32nd among 38 qualifiers, but more worrying for the Rams as they enter the biggest game of the year is the fact that Goff recorded negatively-graded throws (16.0%) at almost the same rate as he recorded positively-graded ones (16.5%). 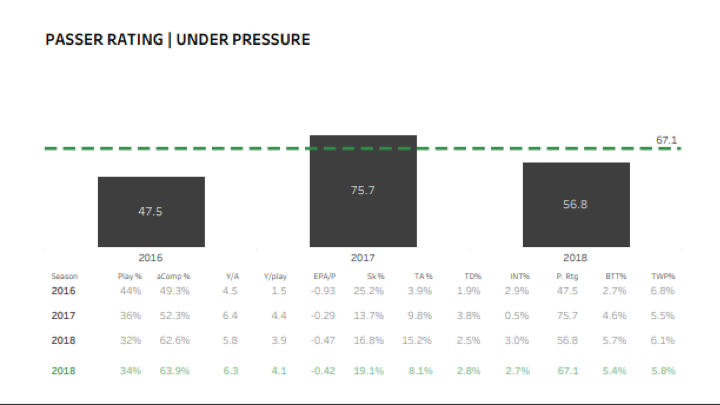 Performance on passes of 20-plus yards downfield

Explosive plays in the passing game can change outcomes on a dime, so at PFF, we have a signature stat to show how well a quarterback does when throwing passes that travel 20 or more yards in the air. Obviously, these passes are low-percentage plays (only34.6 percent have been completed in the PFF era), but their value is asymmetrical as well (they account for an average of 0.28 Expected Points Added and 11.6 yards per pass attempt, both of which are well above the average for the general throw).

Brady just edged out Goff in this department, as his 11th-ranked deep passer rating of 104.1 narrowly bested Goff's 12th-ranked deep passer rating of 98.9. Brady completed 23 of his 65 attempts throughout the regular season, for 714 yards, eight touchdowns, and just two interceptions, while Goff completed 29 of his 65 attempts for 975 yards, nine touchdowns, and five interceptions. While Goff may have more picks next to his name, it's important to note that both quarterbacks registered a turnover-worthy play percentage of 7.7%, meaning that they both put the ball in harm's way at exactly the same rate.

Play action is an interesting phenomenon in that it clearly increases a quarterback’s success. Using play-action causes linebackers and safeties to respect the run (even if a team’s run game isn’t very successful), often causing compromised coverages on the backend. On the other hand, external influences often dictate when and where a quarterback can use play action. For example, how successful is a team’s running game on first down? What is a team’s average starting field position during a game, or season? Is a given team always playing from behind, due to a bad defense or bad luck? All of these dynamics are largely out of the control of the quarterback, and will influence their ability to use, and succeed, in the play action game.

The next level of quarterback analysis is upon us. While the PFF grading system currently adds necessary context to quarterback performance, we’re adding a new layer of detail that can further separate quarterbacks on a throw-for-throw basis.

With that, we’ve started tracking actual ball location for every NFL quarterback, and that data is readily available in this year's QB annual. Did the QB put the slant route on the front number for optimum yards-after-the-catch opportunity? Did he hit him with an accurate pass on his frame? Did he leave it in a catchable spot, but in a less-than-desirable YAC location? We will answer all of these questions and more with PFF’s advanced quarterback analysis. 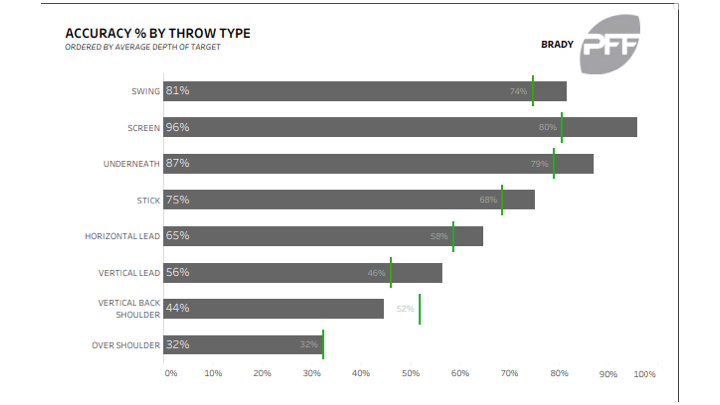 As we can see from Tom Brady's accuracy chart above, he is above the NFL average for almost every single throw type that we chart, with his most accurate throws being screen passes and throws underneath the coverage, showing that he has consistently put the ball in the right location to optimize yards after the catch opportunities for his pass-catchers. 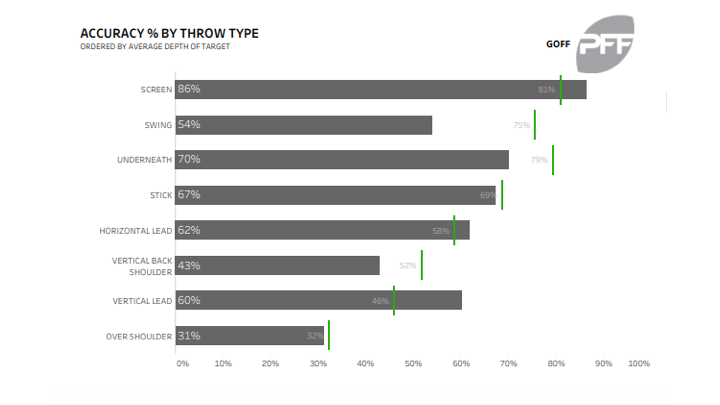 Goff, on the other hand, pales in comparison to Brady's accuracy levels, as he falls below the NFL average on six of the eight throw types. It comes as no surprise to see that he excels in the vertical lead throws, however, where his 60% accuracy percentage dwarfs the NFL average of 46%.

By the time Super Bowl LIII rolls around, much will have been said about the two quarterbacks, who are at the opposite ends of their respective careers but fighting for a common goal. It'll be business as usual for Tom Brady, who will be appearing in his ninth Championship game, while it'll be a whole new ball game for Jared Goff, who will both be appearing in his first. The two have their statistical similarities, they two have their statistical differences, but it will be the execution in all facets of play, stable and unstable, that will determine this year's winner of the Lombardi Trophy.