The NFL’s evolution and shift toward the passing game is well known and well documented. This trend has also changed the focus of what is required from offensive linemen in the league. Pass protection has become increasingly vital for offenses and increased the value of players who excel in this facet of the game. Although people associate pass protection mainly with offensive tackles, 2017 PFF's top pass-blocker award goes to the Oakland Raiders center Rodney Hudson.

Centers are usually tasked with relatively easier assignments, as they are rarely left 1-on-1 with a pass-rusher. As a result, tackles have allowed 2,752 pressures over the regular season while centers surrendered just 613 pressures over the same time span. As a matter of fact, elite offensive tackles had a tough season, as those who led PFF’s pass-blocking efficiency rating have failed to play throughout the entire season. The likes of David Bakhtiari, Joe Thomas, Demar Dotson, Jason Peters, and Marcus Gilbert all had to miss some time due to injury or suspension. Consequently, the excellence of Hudson and the lack of a consistently great offensive tackle in 2017 have made it easy to select a center for this award. 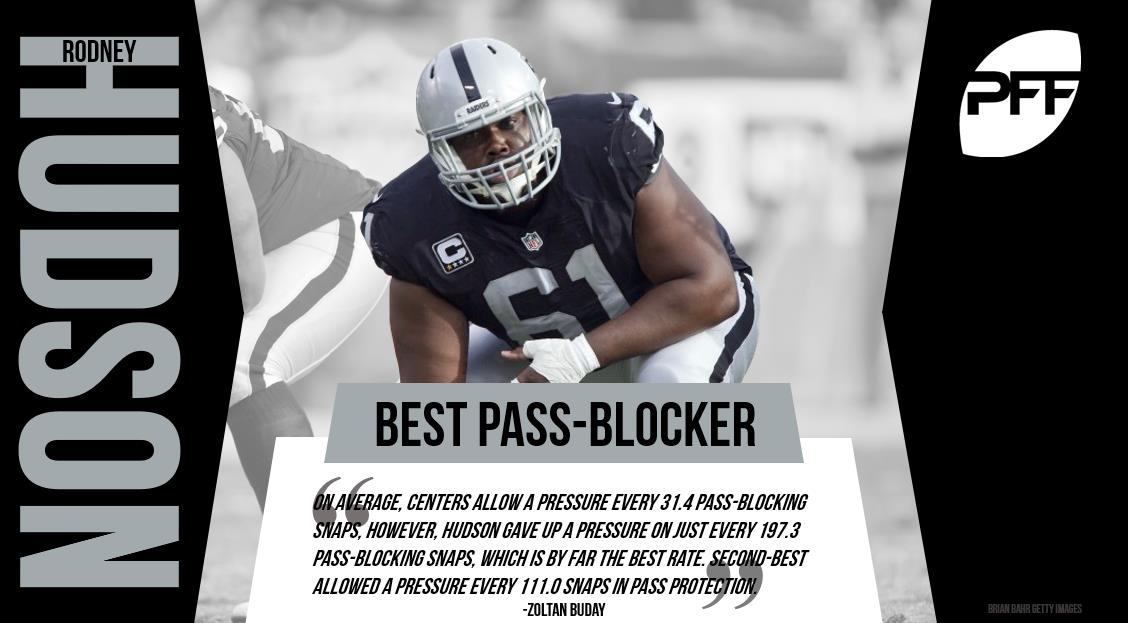 Hudson has been among the best pass-blocking centers for a while now, but his 2017 campaign was outstanding even by his standards. Oakland’s center allowed at least eight pressures in every single season when he was featured as a starter prior to this year, and although Hudson did not allow a single sack or hit in the 2016 season, he did surrender 11 total pressures in that year. In addition, his four penalties committed this year were the fewest for him since 2014.

Even though Hudson went up against players such as Ndamukong Suh, Muhammad Wilkerson and Damon Harrison, neither of these players were able to record a pressure against him. However, there was one player, Philadelphia’s Fletcher Cox, who recorded two pressures – a hit and a hurry – against Hudson, although the hurry came on a play that was nullified due to a penalty.

While we usually focus on offensive tackles when talking about pass protection, but when discussing the best pass-blocking offensive linemen in the game, Hudson’s 2017 season is a good reminder how all five offensive linemen are necessary to keep a clean pocket. Oakland’s center made quarterback Derek Carr’s life easier by taking care of pressure up the middle for most of the season, and he is a deserving winner of the 2017 PFF's Pass-Blocker of the Year Award