Beyond providing data for all 32 NFL teams, PFF also supports network broadcasters with game-preview packets that are used to enhance the in-game experience for fans and viewers. This Saints-Vikings preview features the same information our broadcast partners use for team research and in-game production. 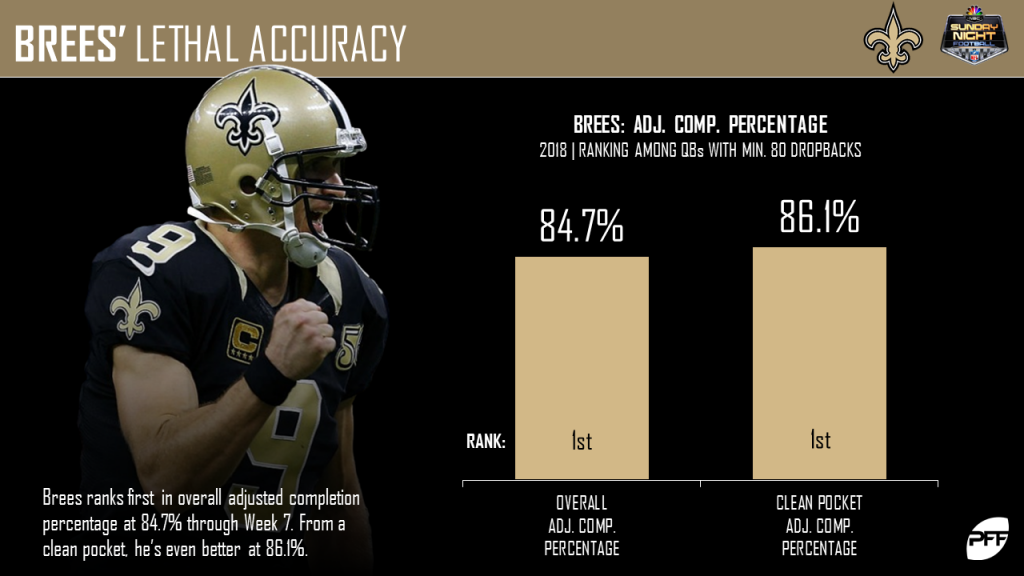 Though he remains an elite receiving option, Alvin Kamara has regressed on the ground through Week 7 when compared to last season. Kamara produced an 86.1 rushing grade in 2017, second-best at the position, but this season he’s only generated a grade of 65.9, 29th among running backs. A major reason why is his inability to run through contact. He’s generated only 2.66 yards after contact on average through Week 7, 34th out of 53 running backs, compared to last season’s 3.83 average yards after contact, which ranked second.

New Orleans is the only team in the NFL with two tackles who rank in the top 10 in pass blocking efficiency. At left tackle, Terron Armstead has been stellar this season allowing only seven total pressures and zero sacks in 232 pass block snaps. His 98.5 efficiency rating ranks sixth-best among all offensive tackles this season. Ryan Ramczyk has been even better at right tackle. He’s allowed only four pressures, and his 98.7 pass blocking efficiency ranks tied-for-first among all offensive tackles. 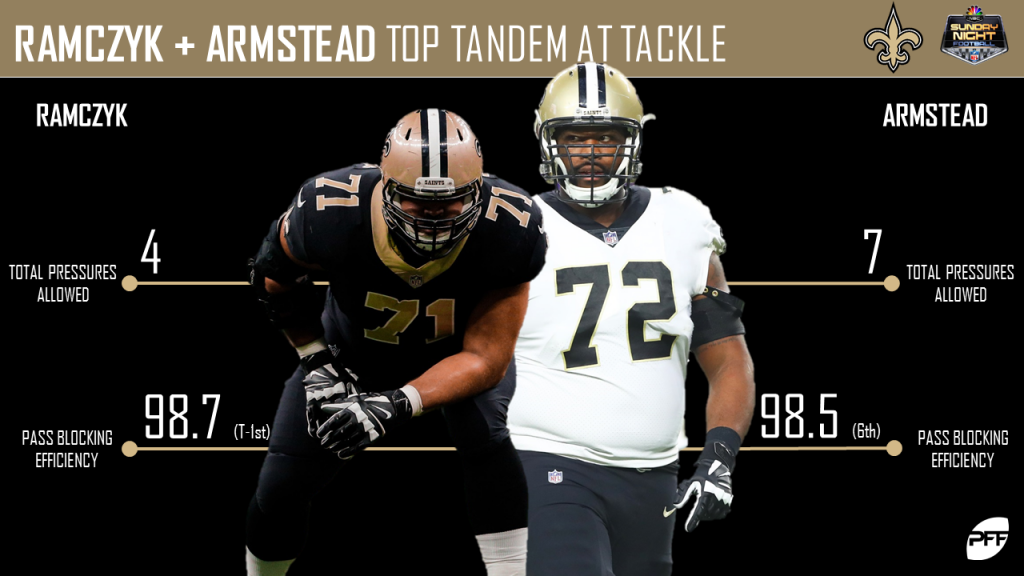 The Saints needed to do something to shore up their struggling secondary that has surrendered 13 passing touchdowns this season. This week, they attempted to do just that with the acquisition of Eli Apple from the New York Giants. Apple has yet to allow a touchdown on the season but has been targeted once every 5.8 snaps in coverage, which ranks 82nd in the NFL. One of Apple’s key gripes is his tackling ability, or lack thereof, as he ranks 108th in the league with seven missed tackles and just 19 successful tries. His poor 2018 tackling grade (37.2) is the opposite of his 2017 campaign, where he maintained the sixth-highest tackling mark in the league (88.0).

Kirk Cousins has been outstanding on deep passes through seven weeks this season with a 134.1 passer rating on attempts 20-plus yards downfield, third-best among quarterbacks. On 31 deep attempts, Cousins has hit for 15 completions for 458 yards and 10 touchdowns with zero interceptions. His 10 scores on deep attempts leads all quarterbacks going into Week 8. 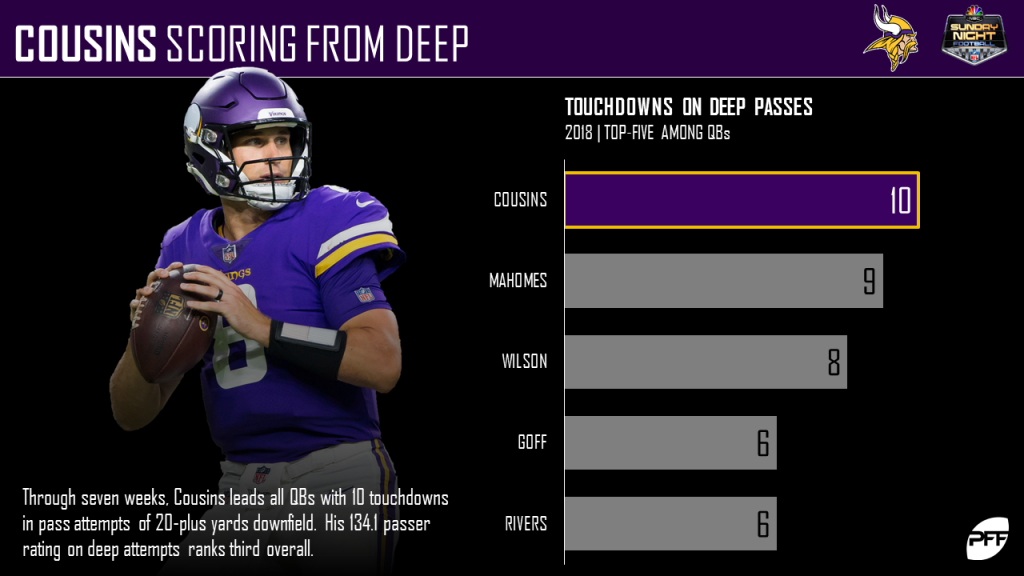 Through Week 7, Adam Thielen has been the best wide receiver in the NFL with a league-leading 822 total receiving yards and 100-plus yards in each game this season. He’s been heavily targeted at a rate of 27.2% this season, third-highest at the position while being highly efficient at 2.54 yards per route run, eighth-best going into Week 8. His 90.9 overall and receiving grades both rank first among wide-outs.

The return of Griffen on the edge

Premier Vikings’ edge rusher, Everson Griffen, is slated to make his return from a five-game absence on Sunday night. In only two games this season, Griffen generated eight total pressures with a sack in each contest. As he ramps up his play again, he’ll look to regain his 2017 form where he produced a career-best 86.5 overall grade and 85.9 pass rushing grade, both 11th among edge rushers last season.

Cornerback Trae Waynes is coming off of his best game of the 2018 season last week against the New York Jets. Waynes was targeted six times and refused to allow a single reception while also corralling an interception and two pass breakups. When targeting Waynes, Sam Darnold had a passer rating of 0.0. Waynes also chipped in on the run-defense, adding two run stops and a run-stop rate of 9.5%. The Vikings’ corner hasn’t had the best start to the season but has bounced back nicely in the last two weeks recording an overall grade of 85.0 during the span of Weeks 6 and 7, tied-for-fifth among cornerbacks in that span. 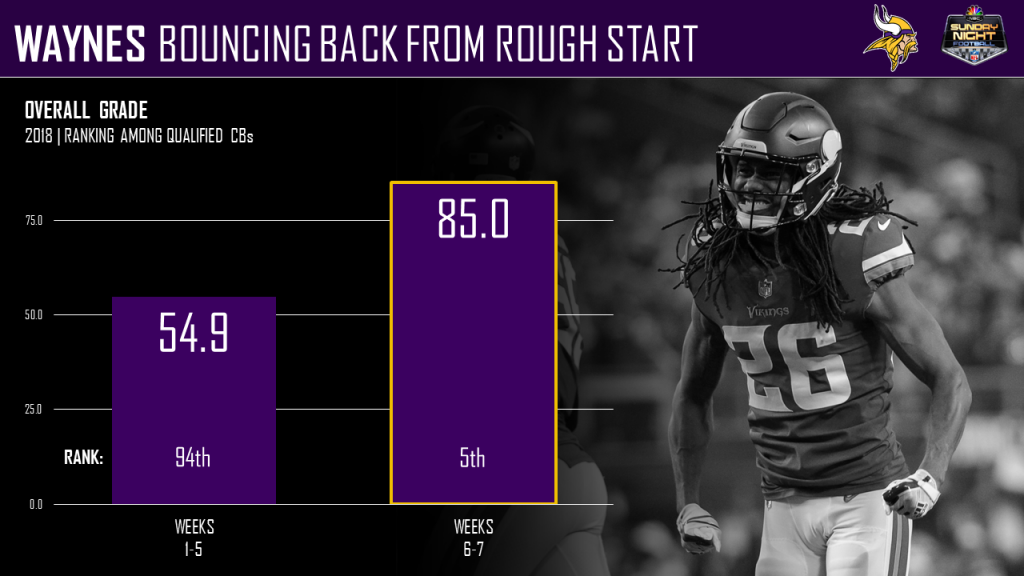