Week 6's slate of games came and went, with plenty of standout offensive performances to feature. We saw a shutout in Nashville, a near-shutout in London, and a game-winning pick-six that highlighted eight contests that were decided by one score or less.

In the Patriots big primetime win over the Chiefs, Sony Michel went for over 100 yards rushing, and Mason played a large role in that. He opened up holes all night, ending the day with a run-blocking grade of 90.5 which ranked first among all guards in Week 6. Mason also put in a strong performance in pass protection, not allowing a single pressure in 38 pass-blocking snaps. 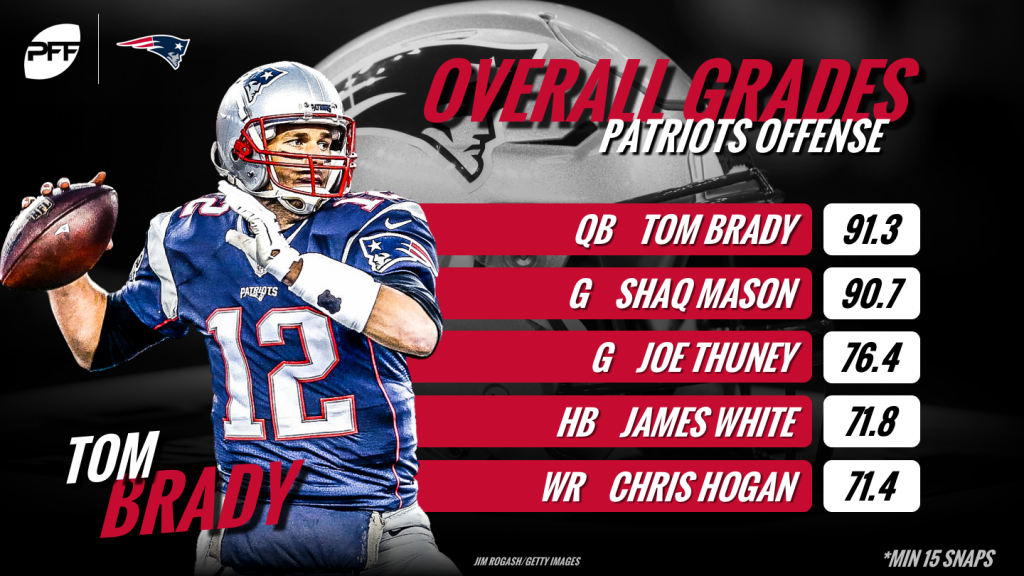 Mason’s teammate and signal-caller turned in an impressive performance himself on Sunday night, capped off with a big-time throw down the sideline to Rob Gronkowski to get the Patriots in field goal range and seal the win. As is usually the case, Brady was on top of his game when getting the ball out of his hands quickly. On passes in under 2.5 seconds, he had a passer rating of 125.8, and on throws that took 2.5 seconds or longer, his passer rating dropped to 84.3.

PFF’s reigning offensive lineman of the year has gotten off to a slow start in 2018 while dealing with a broken hand that he suffered in Week 1, but if this week is any indication, DeCastro is shaping into form on the Steelers offensive line. DeCastro had a strong performance in both facets of the game. He allowed just one hurry in 46 pass-blocking snaps, and he paved the way for James Conner in the run game with a run-blocking grade of 83.3, which ranked second among guards on Sunday. 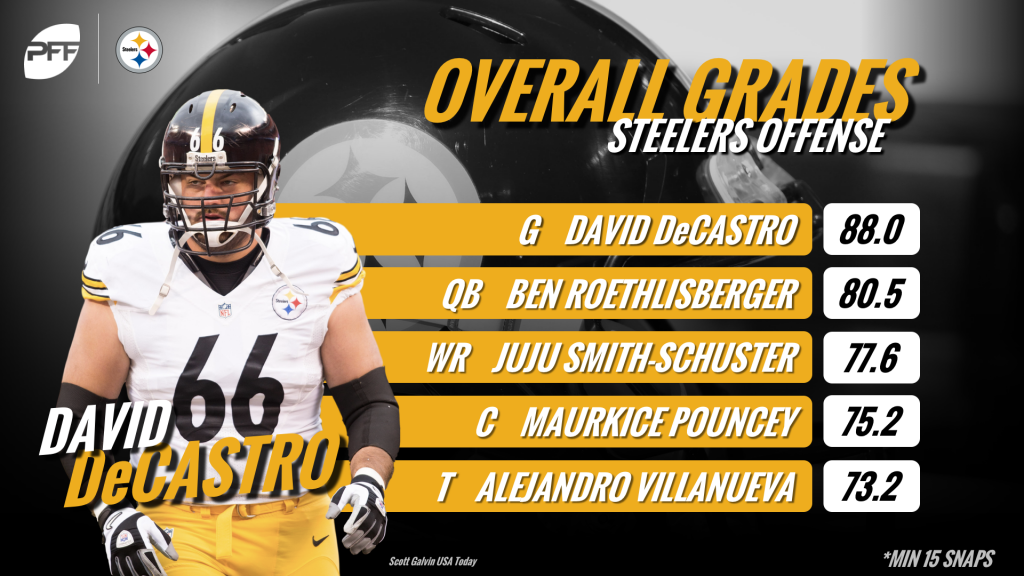 Coming into this week, Hunt had been a non-factor in the Chiefs’ potent passing attack, registering just eight targets and 66 receiving yards. That changed last night. Hunt led all running backs with 6.18 receiving yards per route run behind five catches for 105 receiving yards. Hunt also ran strong all night, picking up 6.1 rushing yards after contact per rushing attempt.

Darnold’s season hasn’t gone quite as planned since the Jets’ blowout Week 1 win over the Detroit Lions, but this week’s performance is a good sign for him and the team moving forward. Darnold went 24 for 30, but four of those incompletions came from drops, spikes, batted passes or throwaways, which gives him a league-high adjusted completion percentage of 92.6% for the week.

Tyreek Hill is a fast man, and that was on display under the lights in Foxboro. He was targeted 12 times on the night and came down with seven of those targets for 142 yards and three touchdowns. As he is prone to do, Hill did a lot of his damage deep down the field against the Patriots. He caught all three of his catchable targets 20 or more yards downfield for 116 yards and two touchdowns.

Similar to Hill, Williams was dangerous on throws deep down the field on Sunday. He only caught three passes all game, but all three of them went for big plays. Williams hauled in all three of his deep targets for 118 yards and two touchdowns. His day was highlighted by a contested catch in the end zone against triple coverage.

Gordon and running mate Austin Ekeler form one of the top running back tandems in the NFL, and Gordon certainly held up his end of that yesterday. He was tough to bring down, totaling six missed tackles forced on 20 touches. Most impressive about his day, however, was how well he ran after contact. Gordon had 132 total rushing yards but 103 rushing yards after contact. His yards after contact per attempt of 5.72 yards ranked behind only Hunt for the week.

Ryan had a good matchup this week against the struggling Tampa Bay Buccaneers defense, and he took full advantage by passing for 354 yards, three touchdowns, and no interceptions. Ryan was best on the day when he took the time to survey the field. On passes that came out 2.5 seconds or more after the snap, Ryan went 14 for 20 with two touchdowns and a passer rating of 138.3. 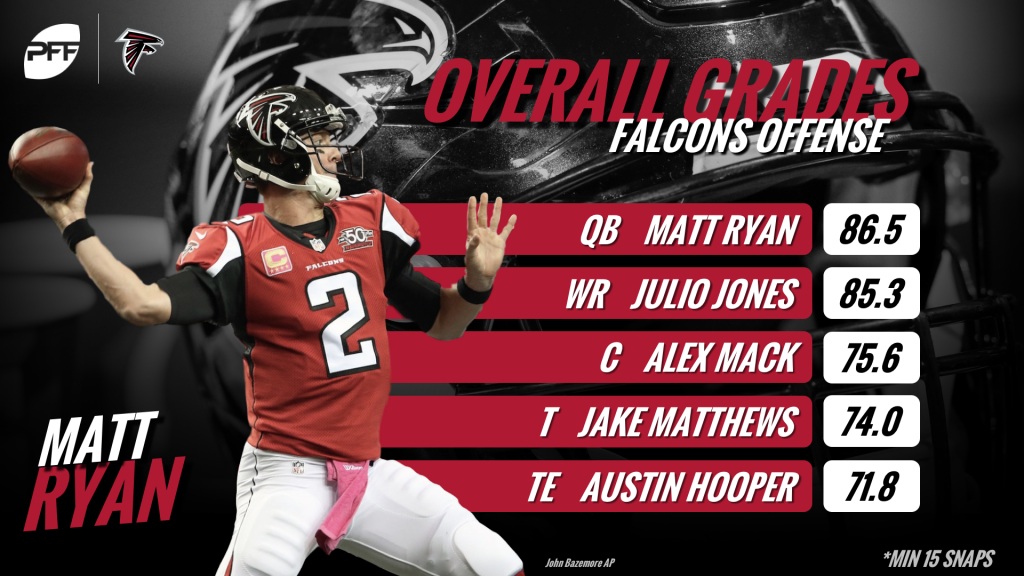