Beyond providing data for all 32 NFL teams, PFF also supports network broadcasters with game-preview packets that are used to enhance the in-game experience for fans and viewers. This Colts-Jets preview features the same information our broadcast partners use for team research and in-game production.

Darnold struggling from a clean pocket

Sam Darnold has had a clean pocket on just 63.8% of his dropbacks (26th among quarterbacks) but has struggled when given that opportunity. Darnold's adjusted completion percentage of 69.8 from a clean pocket ranks 34th out of 36 qualifying signal-callers. His four interceptions thrown from a clean pocket are tied for second-most at the position. 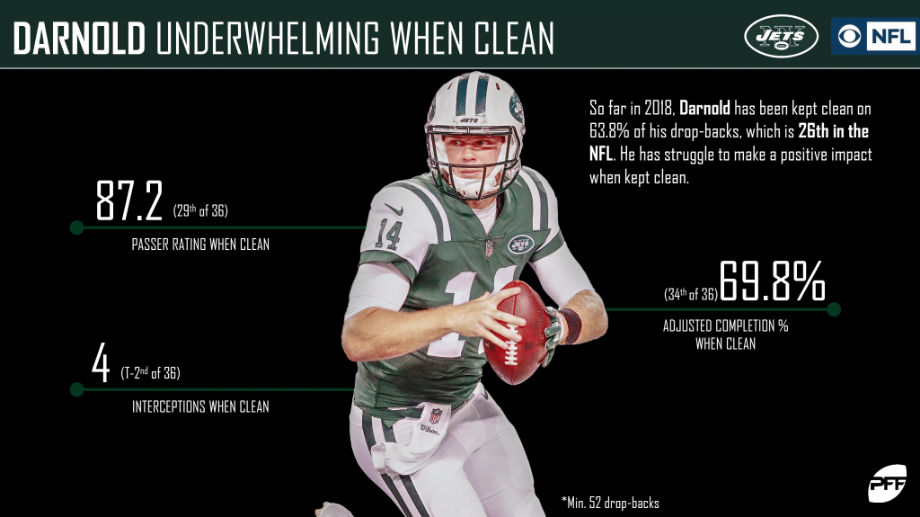 Through five weeks, the offseason signing of Isaiah Crowell has paid immediate dividends for the Jets' running game. Through five weeks, Crowell's 4.40 yards after contact per attempt leads all running backs with at least 25 carries. 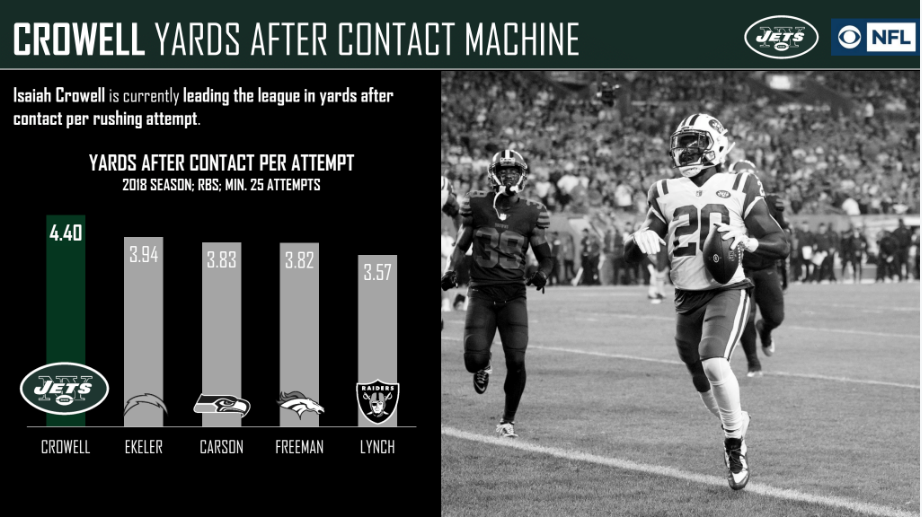 Now in his second year, safety Jamal Adams is getting it done in all facets of the game. His 11 run stops are second among safeties, and his four pressures checks in third. On top of that, he's performed well in coverage, where he's allowed a passer rating of 51.3 when targeted. 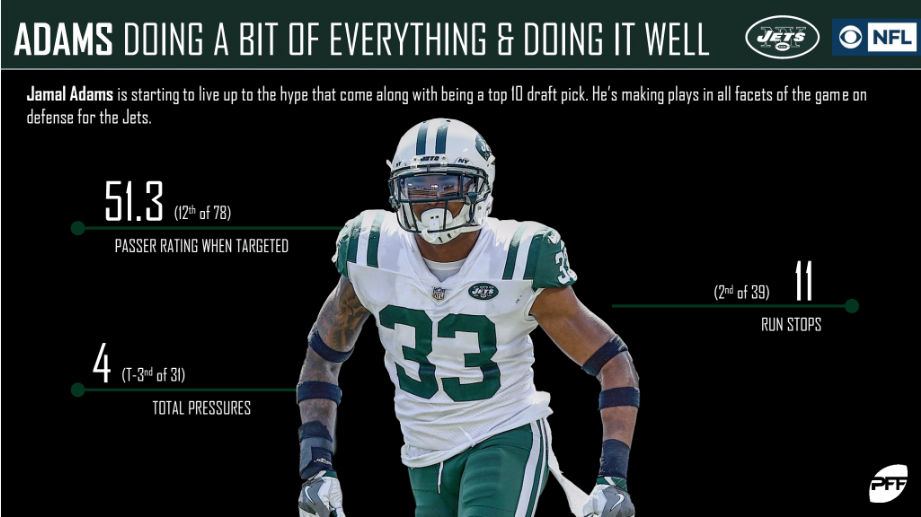 Williamson does it all

Another free agency signing, linebacker Avery Williamson, has also been a factor in all facets of the game. His eight quarterback pressures are the third-most among off-ball linebackers, while he's also in the top ten in terms of run stops and coverage snaps per target. 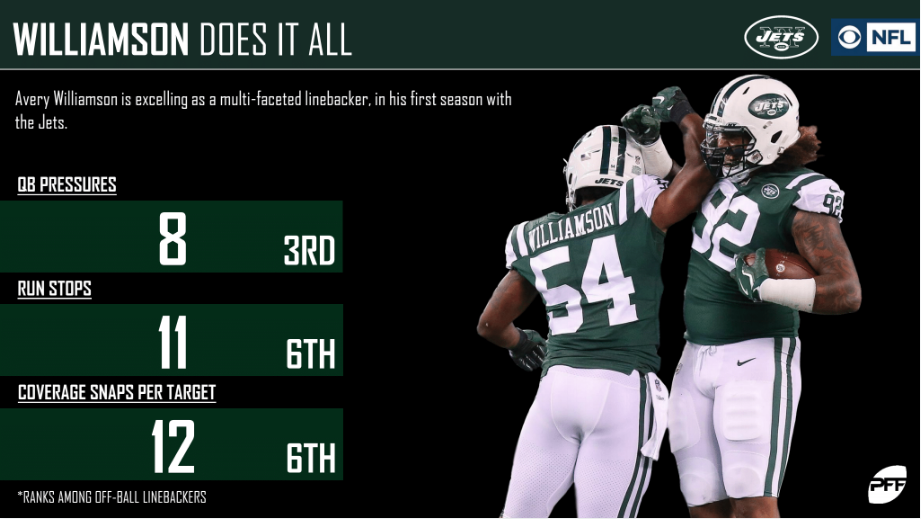 Getting the ball out quick

Through five games, Andrew Luck‘s performance has varied drastically depending on how long he holds the ball. Throwing in less than 2.5 seconds, he has 10 touchdowns and one interception, for a passer rating of 100.1. At 2.5 seconds or more, Luck has two touchdowns, four interceptions and his passer rating drops to 79.1. 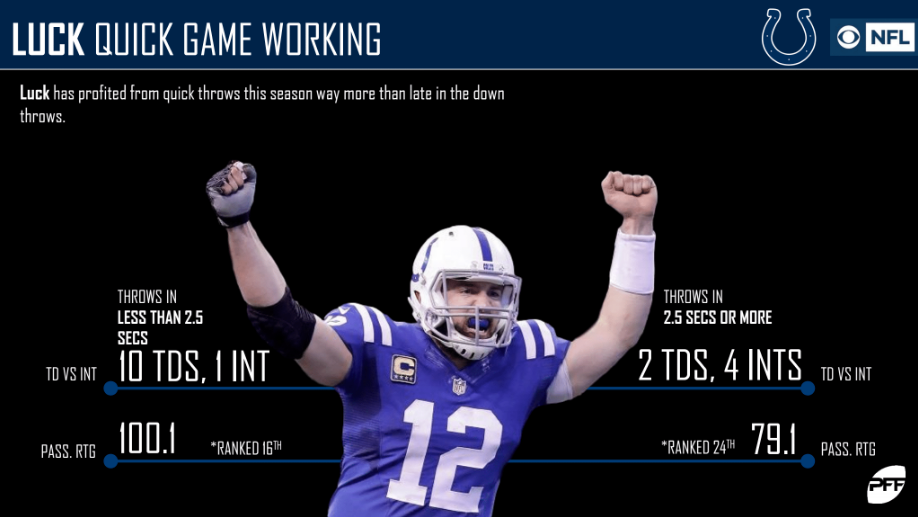 After signing with the Colts this offseason, tight end Eric Ebron has established himself as a popular red zone target. His 13 targets in the red zone lead the position and rank third among all pass-catchers. Four of those red zone targets have resulted in touchdowns, which is tied for the league lead. 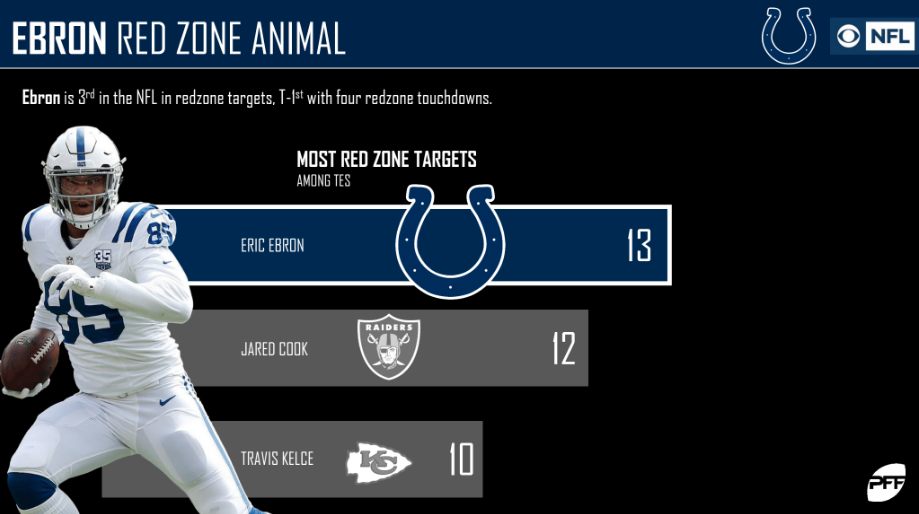 With Crowell and Bilal Powell‘s ability to rack up yards after contact on the ground, it will be an interesting test for the Colts defense. Through five weeks, the Colts' tackling grade of 81.1 is second in the league. Part of their success in that regard can be attributed to members of the secondary. Most notably the trio of Nate Hairston, Pierre Desir, and Malik Hooker has combined for over 50 tackles on the year, missing just one attempt. 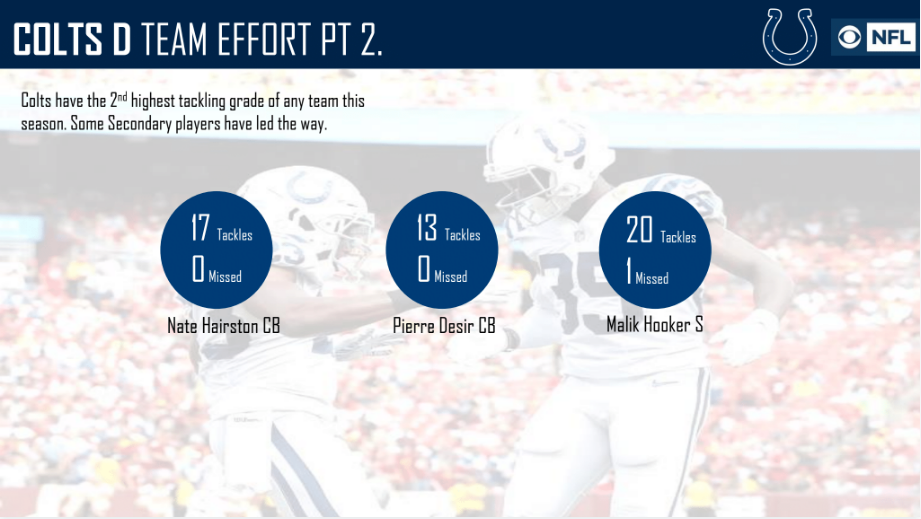 Colts defense taking down the quarterback

Through five weeks, the Colts defense has racked up 19 sacks, but it has been a collective effort. Linebacker Darius Leonard leads the team with four, but in total, the Colts have six players who have recorded two or more. 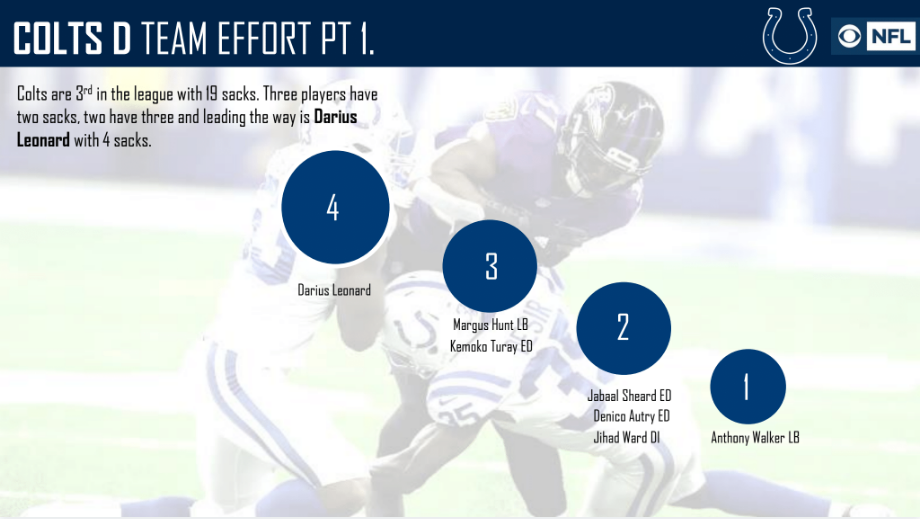