NFL Players of the Month – November 2018

With 12 weeks of the NFL season in the books, it’s time to look at the players of the month across both conferences. The NFL broke out their list for  November, and while it wasn’t a bad effort, there are a few changes that we at Pro Football Focus have made.

Rather than being led by some flashy highlight numbers like sacks or interceptions, Pro Football Focus has watched and graded every single snap from every player of this NFL season, giving us a unique insight and ability to evaluate how players have really been performing in their totality. With that in mind, here are the PFF Players of the Month for November:

Drew Brees’ lead in the league MVP race was solidified with an outstanding three-game stretch in November, as he led all NFL players with 100-plus offensive snaps in overall grade (96.3) in Weeks 9-12. The New Orleans Saints veteran gunslinger’s 11:1 big-time throw to turnover-worthy throw ratio ranked tied for first among all quarterbacks in that span. Brees also ranked fourth in adjusted completion percentage (74.3), first in passer rating from a clean pocket (151.2) and first in passer taking on throws of 10-plus air yards. 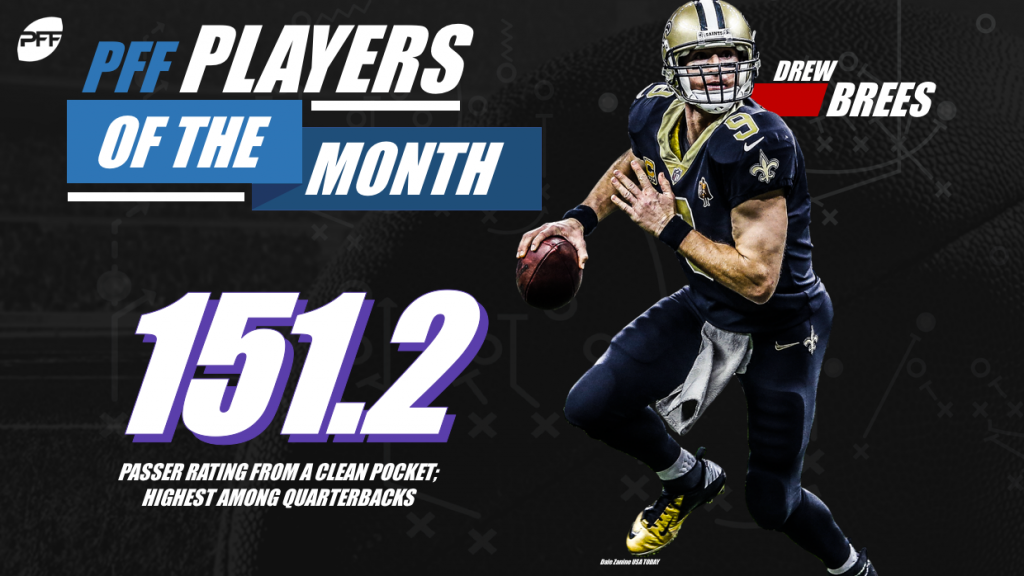 Chicago Bears second-year safety Eddie Jackson scored more touchdowns than a lot of offensive players in November, as he returned two interceptions to the house and picked up a fumble-six in four weeks. Jackson’s efforts all combined for league-leading overall (94.9) and coverage (94.8) grades among players with 100-plus defensive snaps in November. He also allowed just 52 yards and a 17.7 passer rating when targeted in Weeks 9-12, the latter metric leading all qualifying safeties.

Andrew Luck is back. Slotted just behind Brees, the Indianapolis Colts’ wily veteran earned the second-highest grade (92.6) among qualifying offensive players in Weeks 9-12. Luck’s 83.0% adjusted completion percentage ranked third among signal-callers in the month of November, and his 150.2 passer rating under pressure led all quarterbacks with 20-plus pressured dropbacks in the four-week span.

Houston Texans star edge defender J.J. Watt edges out the NFL’s pick for AFC Defensive Player of the Month, Chris Jones, with the second-highest overall grade (92.0) among qualifying defenders, but Jones wasn’t far behind with his 90.0 overall grade in November. Watt and Jones also finished the month with the same number of pressures at 17 apiece, but Watt’s pass-rush win rate (again) edged out Jones slightly at 21.6 compared to Jones’ 20.4 pass-rush win rate. Watt also recorded four more run stops than Jones in Weeks 9-12 and ranked tied for 15th in run-defense grade (80.5), while Jones ranked tied for 117th with his 65.5 run-defense grade. 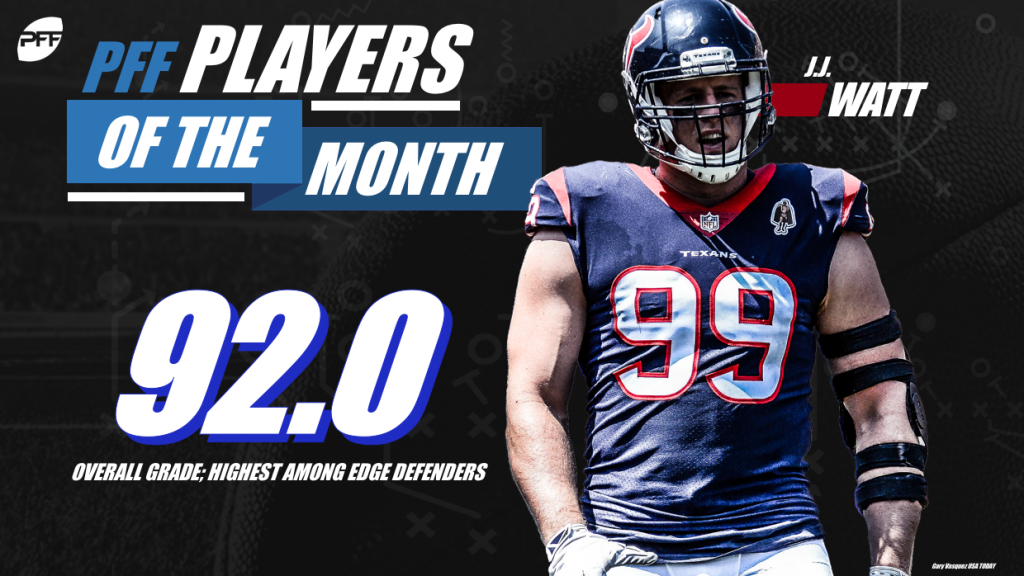 Playing at least 10 snaps across four different special teams units, Kansas City Chiefs running back turned special teams maven Damien Williams earned an NFL-high 88.9 overall grade on special teams in the month of November. He didn’t miss or record any tackles, but he played a key role in forcing fair catches on the punt coverage team and limited mistakes across the board.

Saquon Barkley added to an impressive rookie campaign with the New York Giants with his stellar play in Weeks 9-12, as he ranked third among qualifying backs in yards after contact per attempt (4.2) and seventh in passer rating when targeted (128.1) while logging zero drops. Barkley did a lot with a little in the month of November, as he averaged an NFL-high 3.9 yards per carry and 5.2 yards after contact per carry on the 28 runs where he was contacted at or behind the line of scrimmage in the last four weeks. 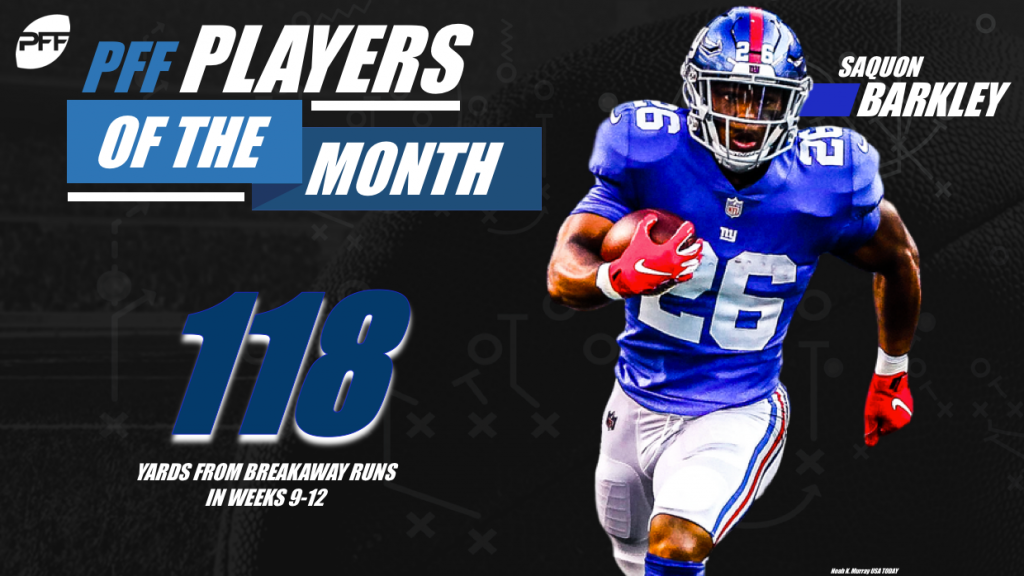 Jerome Baker finished ahead of the NFL’s choice for Defensive Rookie of the Month (Leighton Vander Esch), and the race between the two rookies isn’t as close as that of Watt and Jones. Baker led all rookie defenders and ranked second among linebackers in overall grade (87.8) in Weeks 9-12, while Vander Esch landed at 12th among linebackers. Baker also allowed just five receptions for 36 yards from eight targets and logged an interception in coverage. No linebacker allowed more yards in coverage in November than Dallas Cowboys’ Vander Esch.