The 2018 NFL regular season kicks off in just a day and every general manager, coach, fan and everyone in between are eager to see their team’s performance when the lights are on and the games finally matter again. While navigating the constraints of the salary cap, each team has used this past offseason to build their new roster via free agency, the draft and trades.

While some of the NFL’s better units remain mostly unchanged, below are six new-look units across the NFL that we’ll be keeping an eye on as they've gone through significant overhaul since 2017.

While McCoy continues to anchor this unit, the Bucs utilized free agency to add former Eagles Allen and Curry, along with a former Bear in Unrein. On draft day they completed the overhaul of the defensive line by trading a third-rounder for Pierre-Paul and selecting Vita Vea 12th overall.

Allen brings some might as an early-down run stuffer who had the league’s eighth-highest run-stop percentage (11.3 percent) among defensive interior linemen. Vea, who ranked in the top 10 in both pass-rush productivity and run-stop percentage among FBS interior d-linemen in 2017, was often kept on a snap count in college. The two should make for a stout rotation in the middle alongside McCoy and when Vea is healthy after he missed all of the preseason with an injury.

Pierre-Paul (40) and Curry (27) both had more pressures in 2017 than any player employed by the Bucs last season.

The Packers again loaded up on cornerbacks through the draft by selecting Alexander and Jackson in the first and second rounds, respectively, after making King the first pick of the second round in 2017. Williams returns via free agency and projects as the starter across from King.

When targeted in 2017, Williams allowed only a 58.4 passer rating, eighth best in the league while Alexander was impressive at Louisville a season ago where he allowed a passer rating of just 17.7, and picked off or broke up more passes (six) than he allowed the be caught (five).

Jackson’s 2017 overall grade of 96.2 was tops in the draft class and his grade of 93.4 was tied for the highest among all defensive backs this preseason. 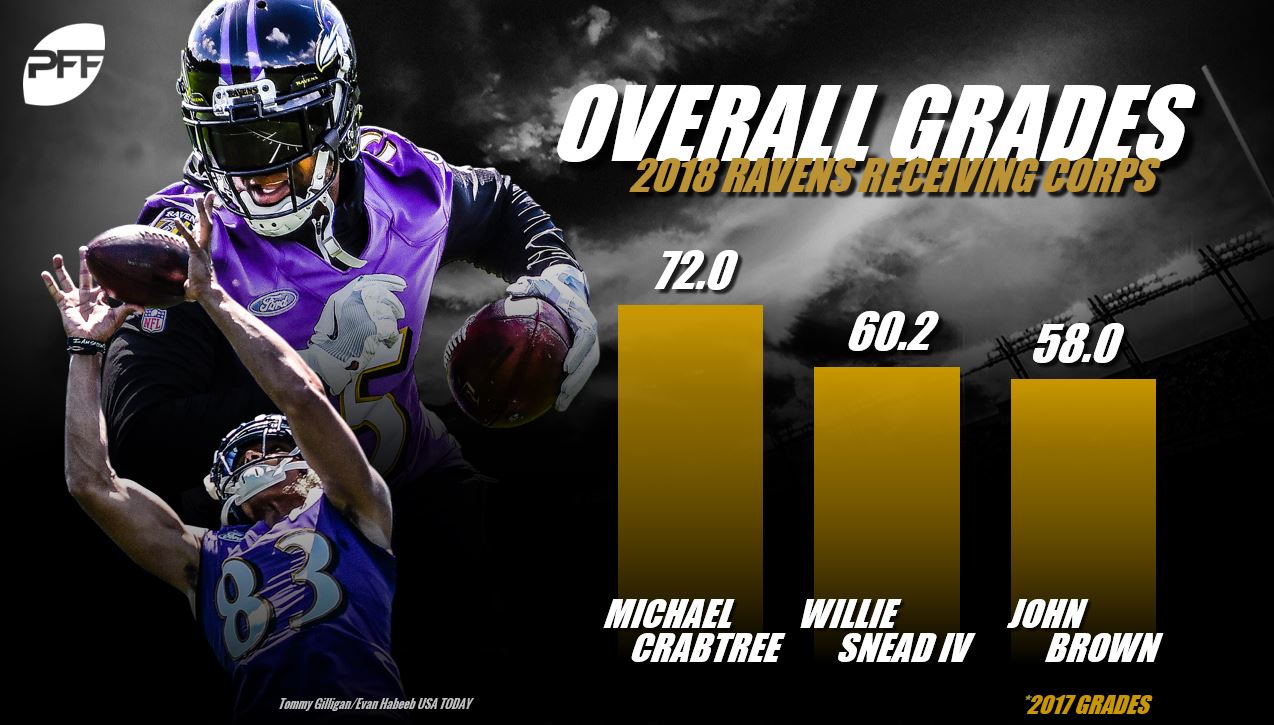 The Ravens were active in free agency, adding Crabtree, Brown and Snead at receiver. While Hurst and Andrews were added through the draft after they were ranked high on our draft-eligible tight end big board.

The sure-handed Hurst did not drop a pass on 43 catchable passes in 2017 and only dropped three of 103 catchable targets in his college career. He’s a receiving tight end who shows ability in gaining yards after the catch and his impact when he returns from a stress fracture suffered this preseason cannot be understated.

Since entering the league, the 10th-year veteran Crabtree has scored more touchdowns on comeback routes than any other receiver.

Outside of the legendary Fitzgerald, the Cardinals group of skill position players will look almost unrecognizable in 2018 compared to 2017, also accounting for the return of RB David Johnson. Bradford and Glennon come via free agency and provide veteran leadership for their rookie first-round pick Rosen. Kirk was a second-round pick this year and Williams, a third-rounder in 2017, played only 98 snaps last season.

Kirk spent most of his time in the slot at Texas A&M and averaged 2.51 yard per route from there, seventh best in the draft class. He may need to start off outside while learning at the knee of Fitzgerald. In 2016, current-starter Bradford led the league with an adjusted completion percentage of 80.7 percent. 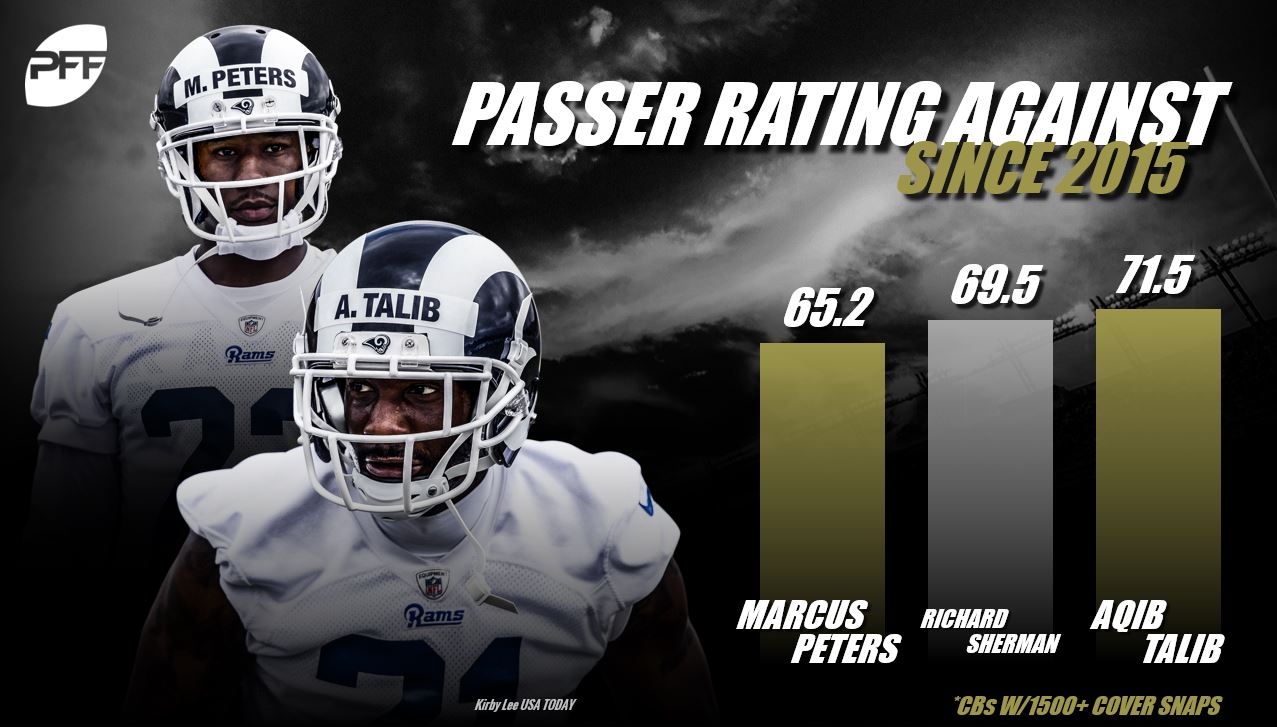 The Rams made some aggressive trades to land their new starting cornerback duo of Peters and Talib. This will allow the aptly named Nickell Robey-Coleman to reassume a role as the nickel cornerback. Shields returns to the league after sitting out most of the last two seasons due to concussions. Johnson III and Joyner return as the starting safeties.

Talib was PFF’s 13th-highest graded cornerback in 2017 while Peters and Robey-Coleman tied at 14th overall. Johnson III impressed as a rookie last year as he lined up within eight yards of the line of scrimmage 64.5 percent of the time and boasted a run-stop percentage of 8.7 percent when doing so, good for eighth best in the league.

The Giants will flip Flowers to the right side where he’ll have to face the likes of Demarcus Lawrence, Ryan Kerrigan and Brandon Graham just within NFC East play. Solder was added as a big-ticket free agent acquisition and Hernandez was picked early in the second round. Halapio gets promoted to starting center after filling in at guard last year and Omameh comes over from Jacksonville, where he started every game last season.

In 2017, Solder tied for 56th in pass-blocking efficiency (93.7) among tackles with at least 178 pass-block snaps, allowing 51 total pressures. He earned a positive grade on 11.1 percent of his run-block snaps, however, which ranking 12th.

Hernandez dominated the competition at UTEP, allowing only four pressures in the past two seasons combined. His 95.2 overall grade in 2016 is the highest single-season grade we’ve ever given to a guard.