We’ll find out on the field this fall, but we here at PFF (and probably you) are impatient. With 254 players selected, everyone wants to know who improved the most with their selections. Using PFF’s draft board and our grades on the current roster, we picked the team in each division that improved themselves the most over the weekend. 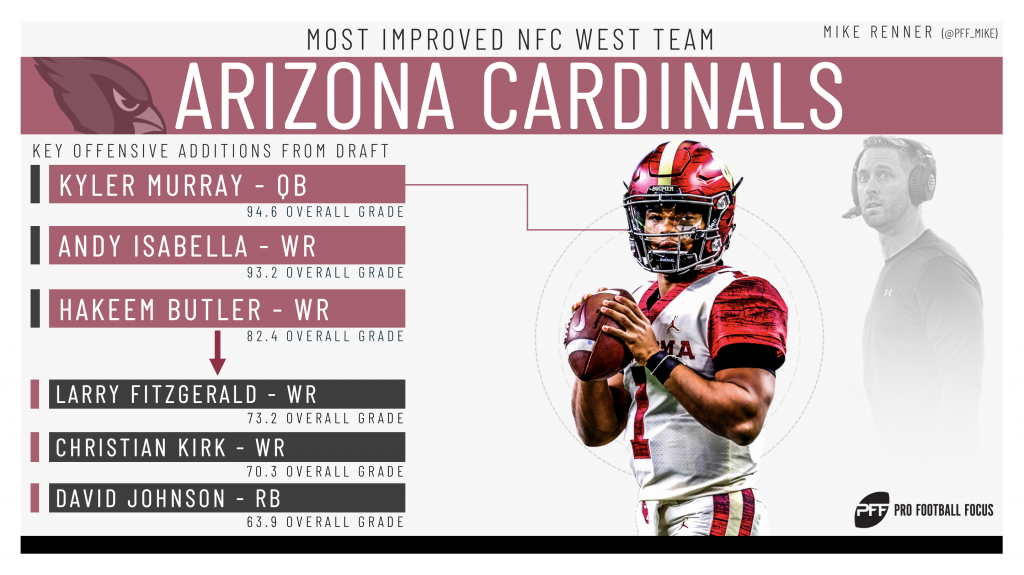 Hands down our favorite draft of any team in the NFL. They added the number one player on PFF’s draft board (Kyler Murray), then four more in our top-50. All of them at positions that can affect the passing game. They added our favorite zone corner in Washington’s Byron Murphy and then two different matchup weapon wide receivers in Massachusetts' Andy Isabella and Iowa State’s Hakeem Butler.

To stand pat at 15 overall and still get their guy in Dwayne Haskins, Washington hit a home run in the first round. The Ohio State quarterback showed more than enough in his one year as a starter to be worthy of a top-10 pick and to not have to forfeit any draft capital to secure him was one of our favorite picks of the draft. From there, Montez Sweat has the talent to seamlessly replace Preston Smith on the right side of their defensive line while Terry McLaurin reunites with his QB to bring a deep threat they haven’t had since Desean Jackson left. I’d also be remiss if I didn’t mention seventh-round cornerback Jimmy Moreland out of James Madison, who was our favorite slot cornerback in the draft. 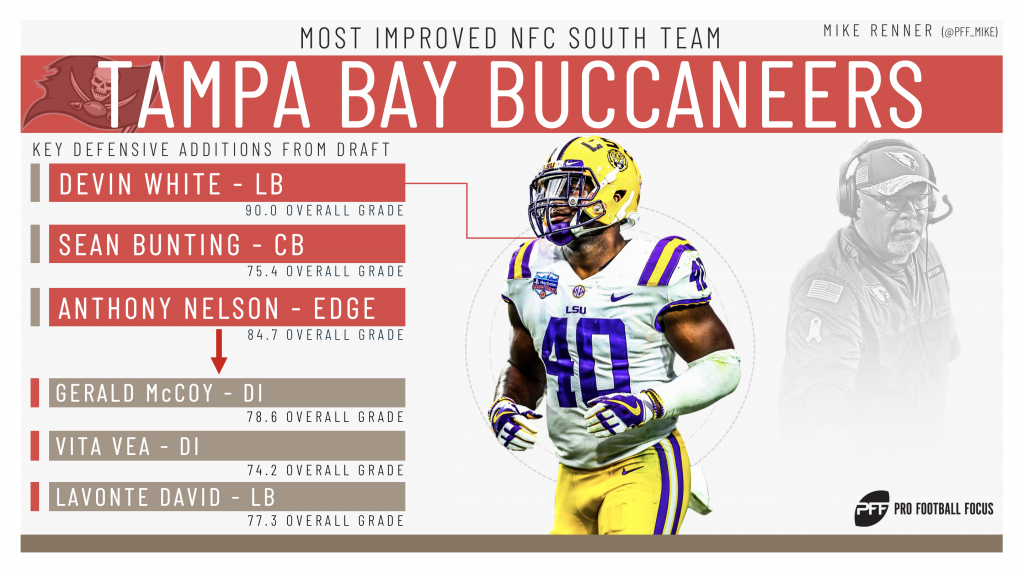 The Bucs not only got the biggest impact player of anyone in the division with LSU linebacker Devin White, but the team also got one of our favorite sleepers in the draft with Iowa defensive end Anthony Nelson. Between those two picks, they had a heavy focus on one thing: coverage. They drafted two corners in Central Michigan’s Sean Bunting and Auburn’s Jamel Dean who we liked the value of each along with Kentucky safety Mike Edwards.

Quinnen Williams’ utter dominance pushes the Jets over the Bills for us. There’s little doubt in our minds that he’ll step in and be one of the best interior disruptors in the NFL from Day 1. Even without a second-round pick, the Jets continued to add impact talent at high-value positions. They nabbed Jachai Polite at the top of the third and Chuma Edoga at the bottom. Polite had a 90.0-plus pass-rushing grade last year at Florida but tanked his stock with a horrid pre-draft process. Edoga is a bit of a project at tackle but impressed at the Senior Bowl with the second-highest win rate of anyone in attendance. 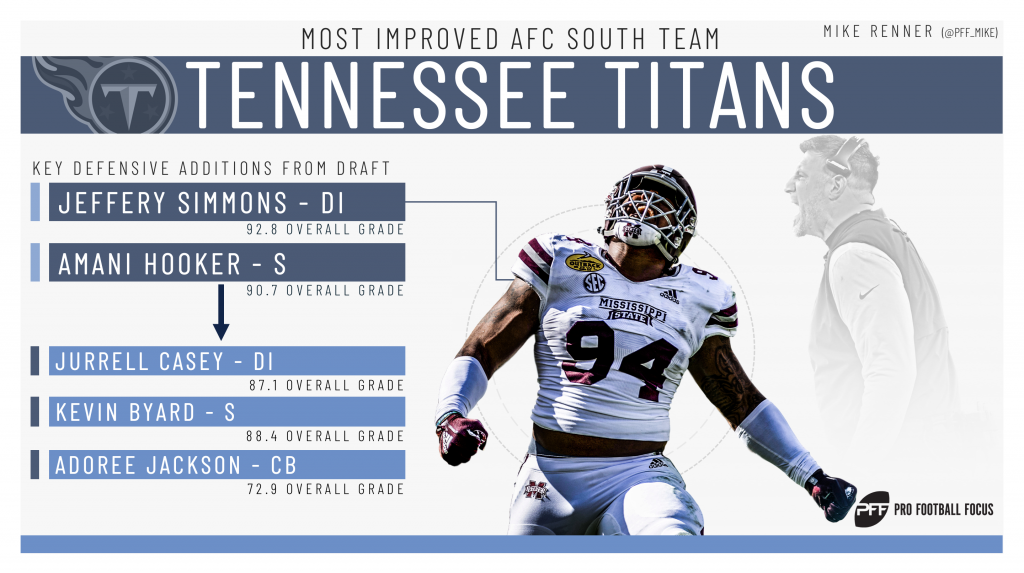 Every single player the Titans selected was ranked higher on the PFF draft board than where they were selected in the draft. Mississippi State defensive tackle Jeffrey Simmons was a top-10 player on our board that they got at 19. We wouldn’t have batted an eye if Ole Miss wideout A.J. Brown was actually the selection for the Titans at 19 and instead they secured our number two wide receiver with the 51st overall pick. They capped it off with one of the steals of the draft, nabbing Iowa safety Amani Hooker (PFF’s 44th ranked player) midway through the fourth round at 116 overall.

Pittsburgh made one of the biggest moves of the first round when they moved up for Devin Bush. After Bush and Devin White, there wasn’t a single linebacker in the class that could replicate their ability in coverage. From there, they got two other PFF favorites in Toledo wide receiver Diontae Johnson and Michigan State cornerback Justin Layne. Johnson drew comps to Antonio Brown from a stylistic perspective inside the PFF offices while Layne is much more suited to zone coverage than former first-rounder Artie Burns. 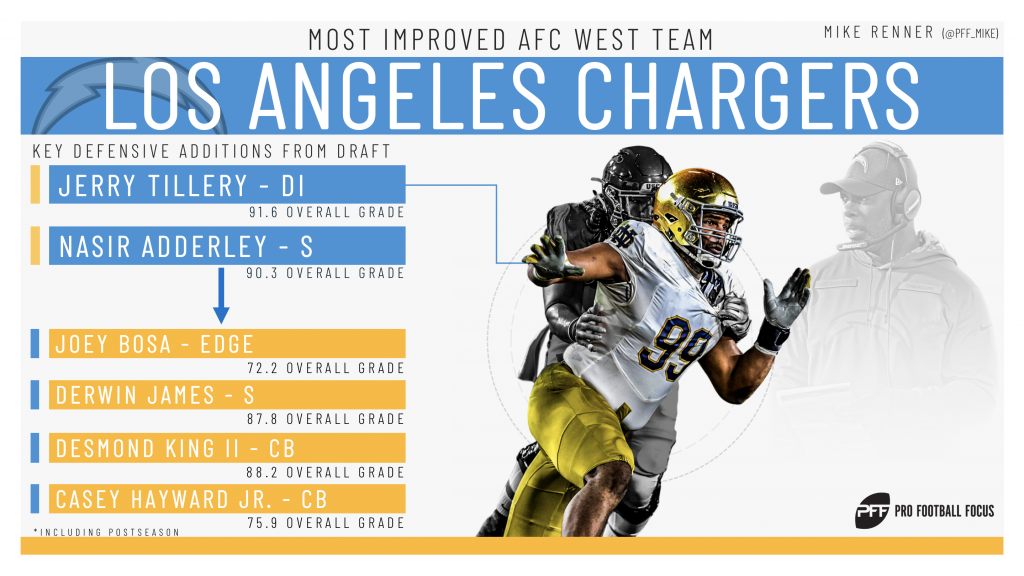 The Raiders may have had a bigger haul, but the Chargers added more quality in our opinion. They added two players in PFF’s top-30 (Jerry Tillery 7, Nasir Adderley 27) compared to zero for the Raiders. Both come at monstrous positions of need. Tillery should be an upgrade from Corey Liuget right out the gate, and Adderley is the perfect center field foil to Derwin James in the box.