Last season, it was the Vikings' third-down defense that was the envy of the rest of the NFL. This season, it’s their blitz packages that have been stifling opposing quarterbacks better than any other team in the league.

Minnesota has brought the blitz on 103 opponent dropbacks (25.2% of the time). On those, they’ve allowed a passer rating of 72.7 and registered 10 sacks. That’s a nice improvement over their 93.1 passer rating allowed when they don’t blitz. For a defense that has been somewhat of a scapegoat at times this season, let’s investigate what makes their blitz packages so effective. 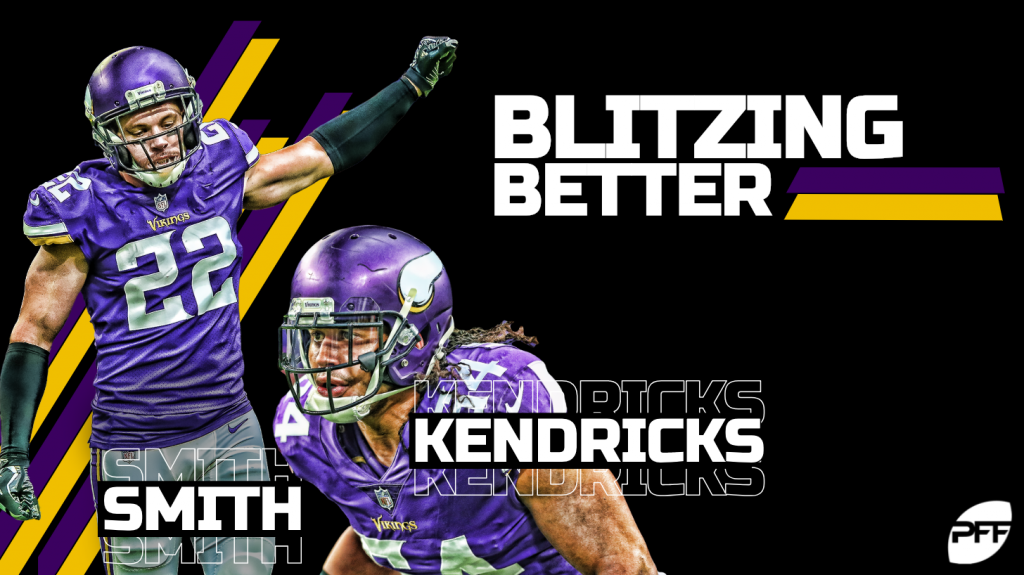 The biggest thing for the Vikings' blitzes is the element of surprise. The Vikings' 25.2% blitz rate is actually slightly below the league average of 27.0%. They’re not adding an extra man regularly because they lack the ability to get home with four; they’re using it as a sporadic weapon in their arsenal. Because of that, their blitz packages have generated pressure a ridiculous 48.5 percent of the time (league average is 41.8 percent). When they don’t blitz, that figure is only 32.6 percent (league average is 30.0 percent).

Drew Brees is currently the front-runner for league MVP yet no one shut him down quite the way the Vikings did. Brees finished 18-of-23 for 120 yards with a touchdown and an interception, and the Saints' offense only mustered 23 points (P.J. Williams had a pick-six to make the final score 30-20). For much of the game, they pushed seven men in coverage and made Brees dink and dunk his way for scores. They only blitzed him three times that game, and surprisingly never on third down. When they did bring the extra man, though, even a veteran quarterback like Brees panicked. He went 1-of-3 for seven yards and an interception on those dropbacks.

That pick was a perfect example of having a blitz in your back pocket for a certain look from the opposition. On the play below, the Saints come out in empty. It was the first time they showed empty out of the huddle the whole game (outside of a goal-line play). The linebackers recognize this and immediately make the adjustment to both walk up, knowing that it affects how the offensive line sets their protection.

The offensive line takes the bait and leaves left defensive end Stephen Weatherly unblocked as Eric Kendricks drops into coverage. Weatherly is in Brees’ face before the routes can break and the result is an errant throw.

While dialing up the right blitz at the right time is one of Mike Zimmer’s calling cards, exotic movement at the snap is another. It’s not often that he’ll bring five-plus defenders from a static look without rolling defenders behind them. Zimmer is the godfather of the double A-gap blitz (two linebackers lined up over the center), it often requires those linebackers to fly backward and cover tight ends and slots if they don’t blitz in that scheme. The play below against the Lions is a great example of the confusion that it causes.

The Vikings already bluffed the blitz and Lions quarterback Matthew Stafford checked the play thinking Harrison Smith was coming up top and that he’d have a one-on-one up top. In actuality, Smith was playing deep-half over the top to that side, and the one-on-one was actually the worst option on the play. Mackensie Alexander comes off the slot on the other side with Eric Wilson hauling ass behind him to rob the slot and Everson Griffen dropping to cover the tight end.

Here’s what the defenders' real responsibilities were pre-snap: 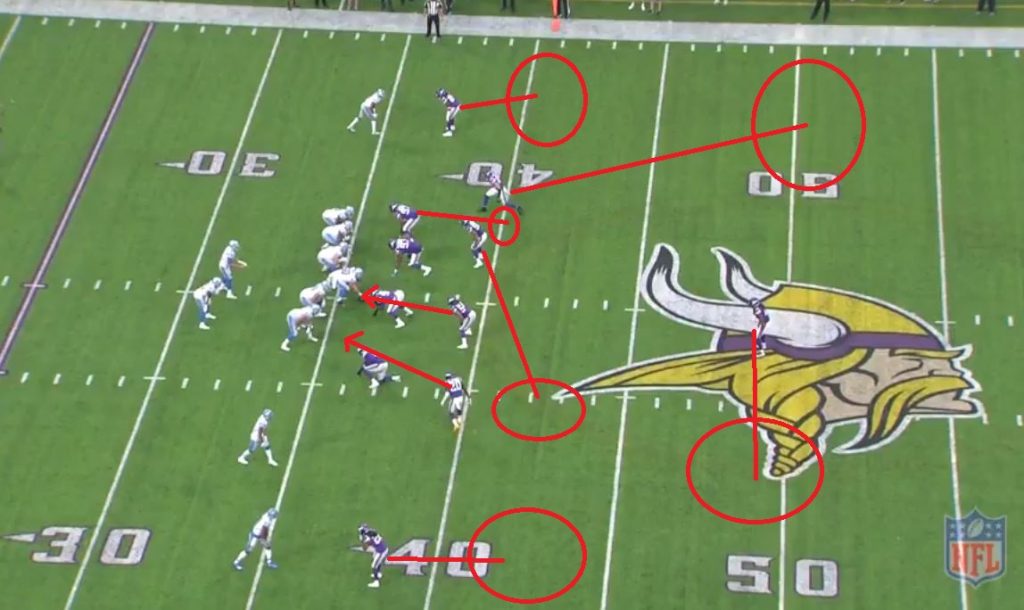 It’s a ton of information for any quarterback to process at the snap of the ball, even for a veteran like Stafford. At the end of the day, though, blitzes still require talent to execute properly. Zimmer’s scheme couldn’t operate without defensive linemen and blitzers that can get home quickly along with defenders who can match up man-to-man behind it.