Malik Hooker's health is key to the Colts' success in 2019

The Indianapolis Colts made their first postseason appearance since 2014 last season. Of course, the return of a healthy Andrew Luck played a huge factor, as No. 12 posted PFF's third-best overall grade (91.0) of any quarterback in 2018.

The additions of Darius Leonard and Quenton Nelson in the 2018 NFL Draft drew plenty of praise, and rightfully so. Nelson finished his rookie season as the sixth-highest graded guard (74.4) in the league with a minimum of 250 snaps, and Leonard earned the highest overall grade (81.8) of any player on Indianapolis’ defense.

All three had a significant impact in the franchise’s turnaround last season along with first-year head coach Frank Reich, but Malik Hooker seems to be the forgotten man. The No. 15 overall pick in the 2017 NFL Draft has proven himself a playmaker at the backend of Indianapolis’ defense. 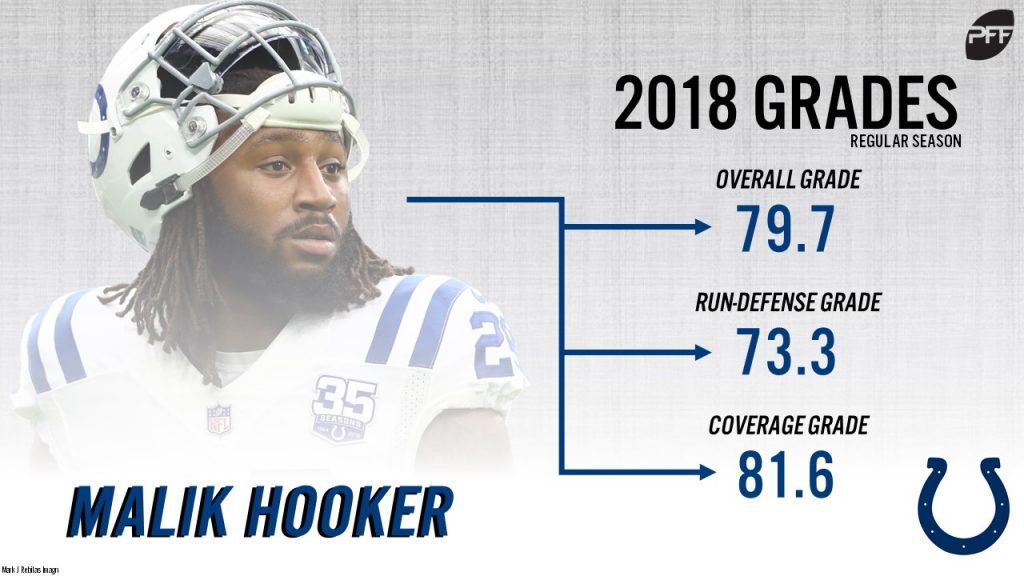 He showed plenty of progress from Year 1 to Year 2, improving his overall grade by more than 14 points. The former Buckeye showcased his ability to be an all-around player for the Colts in 2018, earning grades above 70 in run-defense (73.5), tackling (78.3), and coverage (82.2).

His 79.7 overall grade was the second-best mark of any Colts defender with a minimum of 250 snaps. He allowed four receptions on nine targets in coverage and allowed just one touchdown all season. Hooker’s percentage of targets caught (44.4%) ranked second among all safeties in 2018, including the playoffs.

He finished the year as the league’s 16th highest-graded safety and ranked 14th in coverage at his position. Through his first two seasons, Hooker has given up four touchdowns and recorded five interceptions.

The biggest issue for the 23-year-old ball-hawk has been availability. Hooker has missed 12 games since entering the league, including Indianapolis’ loss to the Kansas City Chiefs in the Divisional Round of the postseason.

Quincy Wilson was the only player in the Colts' secondary to post a coverage grade above 65.0 against Kansas City, and that was with league MVP Patrick Mahomes having a sub-par outing, at least by his 2018 standards.

Hooker has been plagued by injuries dating back to his time at Ohio State. He underwent surgeries for a torn labrum and hernia prior to the 2017 NFL Draft and missed the majority of his rookie season with a torn ACL and MCL. Hip and foot injuries cost him three more games this past season.

The Colts' defense is clearly better when Hooker is on the field. Indianapolis’ lowest and third-lowest graded defensive games, the Divisional Round and Week 8, came when No. 29 was on the sideline.

There’s still plenty of room for growth for Hooker entering his third season. However, his awareness at the back end of Indianapolis’ defense and his ability to come up and make plays against the run makes him one of the most versatile free safeties in the league.

Whether it’s his game-sealing interception against the New York Giants in Week 16 or him derailing Jacksonville Jaguars locomotive Leonard Fournette on the ground, the Colts are only better defensively when Hooker plays.

General manager Chris Ballard has overhauled Indianapolis’ defense since taking over in 2017. He re-signed cornerback Pierre Desir after posting a career-high overall grade (77.7) while logging his most defensive snaps (1,055) in a single season. After trading back from the first round of the 2019 NFL Draft, Ballard used the Colts’ first draft selection, No. 34 overall, on Temple cornerback Rock Ya-Sin.

He has made Indianapolis’ secondary a priority through his first two seasons at the helm, and it all started with Hooker. The former first-round pick has already shown on the field that he can be a difference-maker.

The key for Hooker and the Colts will be for him to stay healthy, which, at this point, is easier said than done.