At the conclusion of the 2018 NFL Draft, the New York Jets may have very well come away with their franchise quarterback in Sam Darnold out of USC. Having traded away their second-round pick to land Darnold, the Jets were left with five picks for the remainder of the draft, and while many believe that the Jets got a steal by taking Darnold at pick No. 3, Gang Green ended up getting a bargain in the fourth round, as well. With the 107th pick in the draft, the Jets selected tight end Chris Herndon out of the University of Miami. In a draft class that included players like Hayden Hurst, Mark Andrews and Dallas Goedert at the tight end position, Herndon entered the draft flying under the radar.

During his four-year stint with the Miami Hurricanes, Herndon’s highest overall grade came in the 2017 season. His 69.8 overall grade ranked 21st among FBS tight ends with a minimum of 35 targets in 2017. One area where Herndon happened to shine was in his pass blocking, where he recorded a 78.8 pass-blocking grade which ranked fifth among qualifying tight ends. On top of this, Herndon averaged 9.3 yards after the catch per reception which led the same group of players. Though he didn’t have the highest overall grade, he proved to be a reliable target throughout his final college season by tallying a 127.6 passer rating when targeted which was tied for the eighth-best among draft-eligible players at the position. Even though Herndon doesn’t have too many college stats that would make a scout’s eyes pop, he still showed flashes in certain areas that would translate well into the NFL.

Despite being the seventh tight end taken in last years’ draft, Herndon finished 2018 with a 74.1 overall grade which was tied for the second-highest among rookie tight ends. Additionally, his 74.1 overall grade was good for the ninth-highest among all tight ends with a minimum of 40 targets. In what was a mightily impressive rookie year, Herndon averaged 12.9 yards per reception, which ranked seventh, and he had a 110.3 passer rating when targeted which ranked ninth.

One area where Herndon thrived last season was in the red zone, where his 73.3 red-zone receiving grade ranked eleventh among tight ends with at least five red-zone targets. More impressively, his 152.7 passer rating when targeted in the red zone ranked first among that same list of qualifiers. To explain just how impactful Herndon became in the Jets’ offense, here were some of his best games from 2018 and the areas where he stood out. 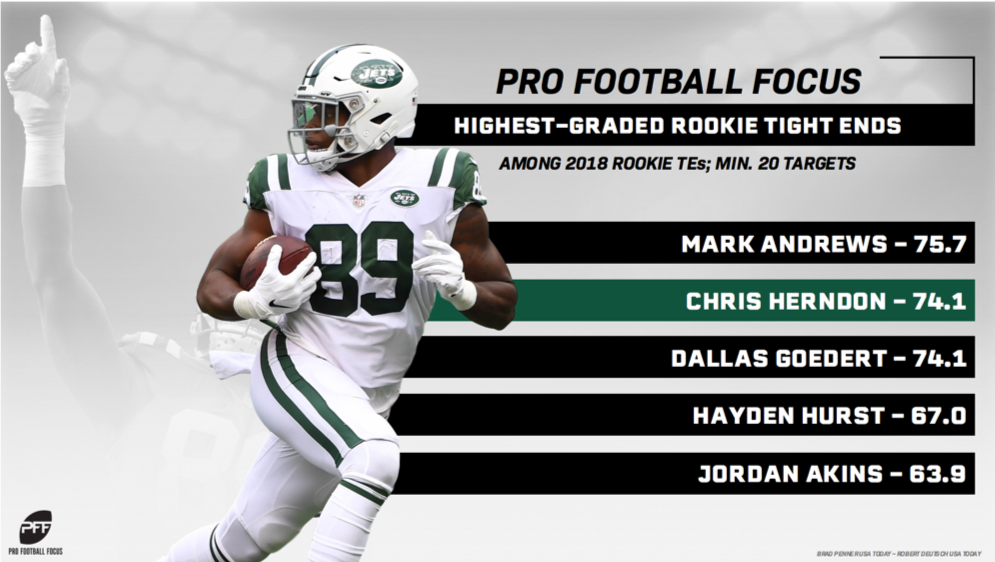 This game against the Colts tuned out to be Herndon’s breakout game for the Jets, as he finished the game with a remarkable 94.1 receiving grade which was the highest among all tight ends from Week 6. Herndon hauled in two receptions in this game, one of them being a 32-yard touchdown from Darnold in the third quarter. In addition to this, he averaged 28.0 yards per reception which ranked third and had a 158.3 passer rating when targeted which was first among tight ends from Week 6.

Herndon’s effort from the Jets’ victory earned a 90.5 overall grade that ranked first among tight ends from Week 6. On top of this, his overall grade was the third-highest among offensive players from Week 6, putting him just behind Tom Brady’s 91.3 and Adam Thielen’s 90.9.

Despite the Jets’ 37-17 loss in Week 7, Herndon turned in a strong performance in back-to-back weeks with an increased workload. Towards the end of the first quarter of this game, Darnold hit Herndon for a 12-yard touchdown reception over the middle of the field. Herndon added on three more receptions during the rest of the game which earned an 86.4 single-game receiving grade, good for the third-highest among tight ends from Week 7.

From this game, Herndon was able to display his ability to get open effectively in the middle of the field.  He also proved that he could be a solid pass blocker as well, earning a 78.3 pass-blocking grade which was the highest among tight ends from that week. On the day, Herndon recorded four receptions which resulted in 42 yards and a touchdown. His 82.8 overall grade was the fourth-best among tight ends from Week 7, as well.

Week 16 was a tough loss at home for the Jets, but Herndon turned in his best performance of the season. The rookie finished with a 158.3 passer rating when targeted; he saw six targets and hauled in all six for 82 yards and a touchdown. His 92.9 overall grade was the highest among all offensive players in Week 16.

Despite not being a highly touted prospect coming out of college, Herndon now has the chance to build on his promising rookie campaign and make his name known leaguewide. If he is able to string together more performances like the three games mentioned above, he could well be poised for a productive season with the Jets in 2019.