Entering his third season with the Tennessee Titans, linebacker Jayon Brown is coming off a breakout 2018 campaign which saw a significant improvement from his debut season in seemingly every aspect of his game.

Brown’s rookie campaign left much to be desired after he was selected with the 155th overall pick of the 2017 draft. He finished with a 54.1 overall grade across 527 total snaps, and he contributed just 18 defensive stops. He spent much of the year as the team’s passing-down option at linebacker with 75.7% of his snaps being in coverage. 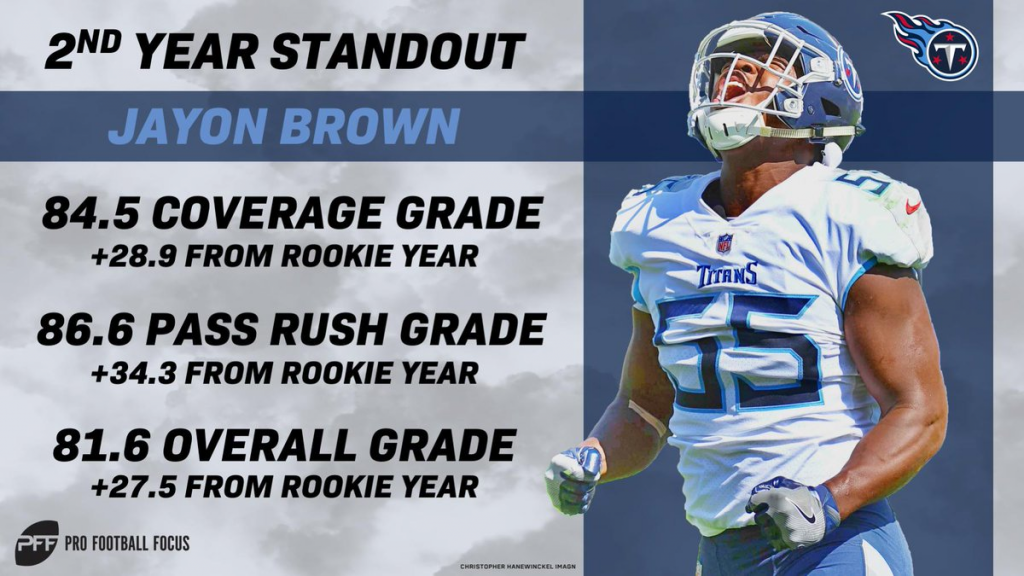 In his second season, the UCLA product made a sophomore jump, making nine starts among the Titans’ linebacking corps in his breakout season. Brown’s overall grade of 81.6 was a 27.5-point increase from Year 1 in the league, and it ranked ninth at the position. As a result, Brown’s snaps significantly increased with more usage defending the run (35.2 percent of snaps in 2018 – compared to 16.5 percent in 2017). He generated a total of 40 defensive stops with 23 being stops against the run.

In addition to improving his play against the run, Brown was also particularly great in coverage and at rushing the passer last season. He earned an 84.5 coverage grade, a 28.9 increase from his rookie season, which ranked fourth among linebackers and he allowed 36 receptions on 56 targets for 285 yards, good enough for a 64.3 percent catch rate allowed that ranked third among his positional peers. Brown allowed a 69.4 passer rating when targeted in coverage (fourth-best), with five pass breakups and one interception.

In comparison between his first two seasons, Brown allowed a first down or touchdown on 47.8 percent of targets into his coverage as a rookie, but rate dropped down to 33.3 percent in Year 2. 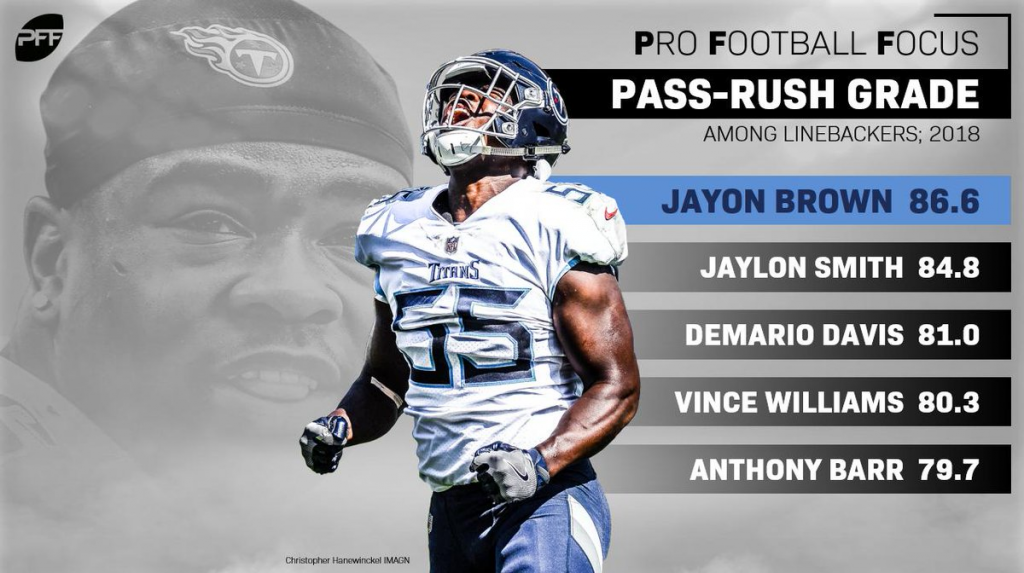 Among his drastic improvements last season, Brown saw his most significant jump as a pass rusher. He led the league at his position with an 86.6 pass-rushing grade on the year, a remarkable 34.3 increase from 2017.

His pass-rush ability was showcased with a 17.5 percent win rate (the rate at which he beats a pass blocker on a pass rush, even if the throw gets off too quickly for pressure to land), ranking seventh-best. The sophomore standout finished tied for first among off-ball linebackers with seven sacks, and overall, Brown generated 16 total pressures on 97 pass-rush snaps.

Brown was overlooked by many as a fifth-round draft pick two years ago, but his play has fortified him as a crucial piece of the Titans’ defense. His sophomore leap has propelled him into the conversation as one of the most versatile young linebackers in the league, and if he’s able to respond to his breakout season with another top-tier performance in 2019, he’ll quickly force his way into the discussion as a top all-around linebacker in the NFL.