Ja’Wuan James has been good, not great in his five-year career – unspectacular if you will. And that quality of play at tackle, contrary to popular belief, is well worth his expected price tag this offseason.

James, a former first-round pick, should see a multi-year deal worth upwards of $7 million per year given his positional value, durability and, yes, unspectacular production.

“So many teams are simply looking for consistency at tackle and James brings that,” PFF’s Mike Renner writes in our January top-50 free agents article. “His lowest pass-blocking grade over the past four seasons is only 67.3, which is far from liability territory.” 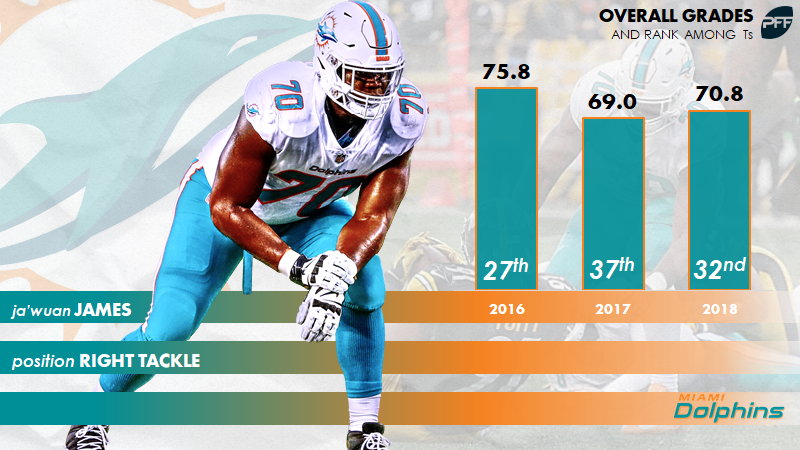 Across his 799 pass-blocking snaps in 2017 and 2018, James allowed just 38 total pressures (25 hurries, four hits, nine sacks). To add perspective, 13 NFL teams had at least one tackle allow more than 38 pressures in 2018 alone. While James may not be in the same conversation as Green Bay Packers’ David Bakhtiari and New Orleans Saints’ Terron Armstead in terms of pass protection, he’s still proved more than serviceable in that regard, a win by many teams’ standards.

Positioned as the 21st overall free agent on our top-50 list, James may not be getting hyped as much as other big names expected to test the market, but that shouldn’t keep him from signing a lucrative deal and filling in as a dependable piece to either the Miami Dolphins’ or another team’s offensive line in 2019 and beyond.