The Detroit Lions will kick off their preseason against the Oakland Raiders on Friday night. The game will feature NFL debuts from two of the most dominant players in college football a season ago – former Michigan Wolverine Maurice Hurst and former Arkansas Razorback Frank Ragnow.

Hurst did it in both facets of the game – rushing the passer and defending the run. In 2017, he led all interior defensive linemen with 47 pressures on his 298 pass-rushing snaps. They weren’t simply quarterback hurries either: 21 of those 47 pressures resulted in a sack or the quarterback getting hit.

As the PFF NFL Draft Guide stated, “There isn’t another interior player that can come close to his production as a pass-rusher in college and everything on tape suggests it will translate to the NFL”.

When Hurst wasn’t getting after the quarterback, he was stuffing the run. His run-defense grade of 93.3 ranked second at the position behind only Houston's Ed Oliver. He recorded 37 run stops in his 282 run-defense snaps for a run stop percentage of 13.1 percent. That ranked eighth among interior defensive linemen with at least 200 run-defense snaps.

Ragnow, like Hurst, has made a name for himself by controlling the pass-rush and the run game on the interior of the trenches. Selected in the first round of this past draft, Ragnow was taken by the Lions to fortify the interior of their offensive line. 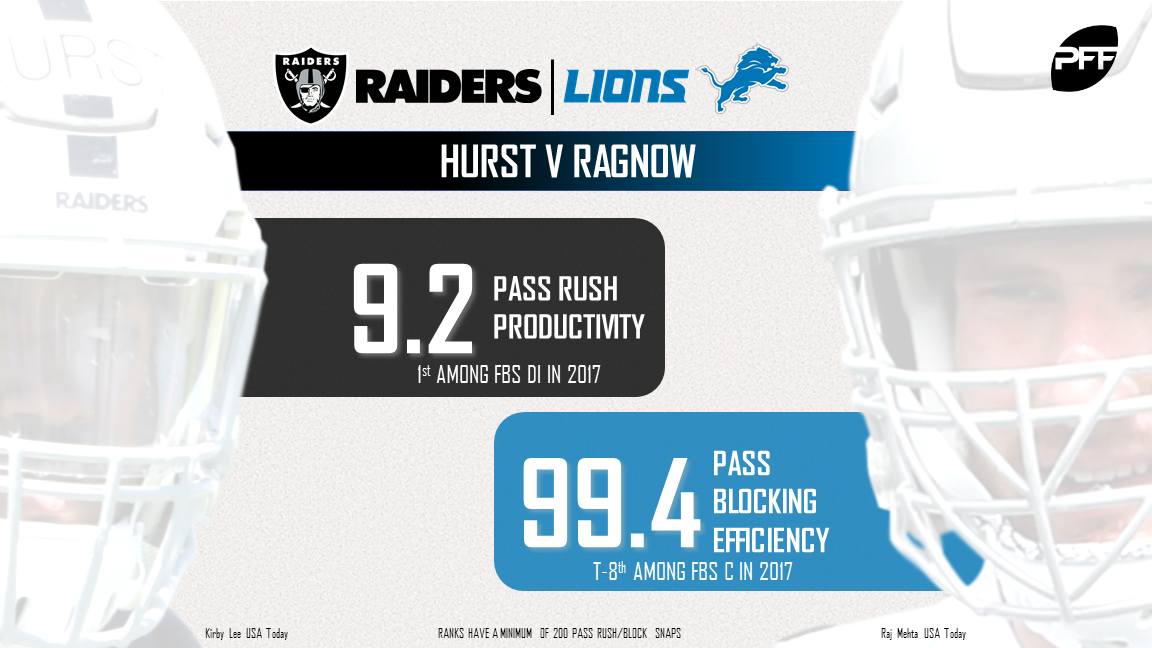 He dominated the center position at the college level his last two seasons at Arkansas. In 2016, he received an overall grade of 94.5. That was first among centers by over 5.0 points. In 2017, he received an overall grade of 94.1. Once again, that ranked as the highest graded center by over 5.0 points. The Lions are hoping his success at center translates to guard where he looks to be slotting into their offensive line.

Two talented rookies selected 120 picks apart in this year’s draft form an interesting potential matchup in the preseason showdown between the Lions and Raiders. Regardless of which player gains the upper hand when they cross paths on Friday, both fanbases have reason to be excited watching Hurst and Ragnow begin their NFL careers.