Why Tom Brady was the NFL's best player this season

BUFFALO, NY - OCTOBER 30: Tom Brady #12 of the New England Patriots looks to throw against the Buffalo Bills during the first half at New Era Field on October 30, 2016 in Buffalo, New York. (Photo by Brett Carlsen/Getty Images)

New England Patriots QB Tom Brady was recently named the winner of Pro Football Focus' Best Player, Offensive Player of the Year, and Best Passer awards for the 2016 NFL season. To see the winner of every PFF award, visit our NFL awards page.

When the NFL imposed a four-game suspension on Tom Brady at the end of the farcical “Deflategate” saga, it seemed inevitable that he would come back with a point to prove and set about laying waste to the rest of the NFL. Things went exactly to script, and Brady ended the regular season with the highest single-season PFF grade we have ever given a QB over the past decade of grading (99.3).

For perspective, this is a 0-100 scale, so 99.3 is pretty good. With the playoffs included (through the AFC Championship game), Brady has actually raised that mark to 99.5. 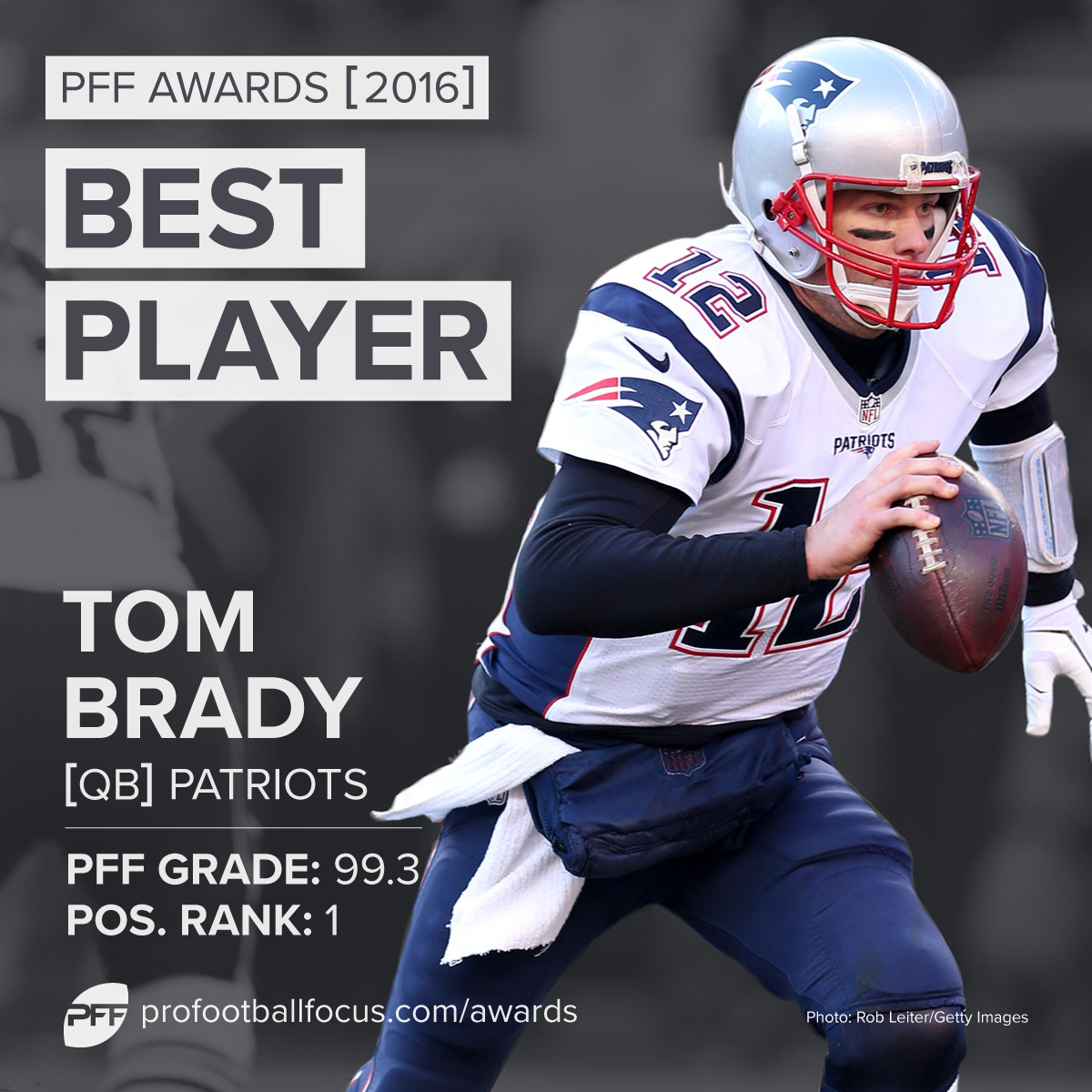 Brady is 39 years old and playing the best football of his career. While not exactly unprecedented—Brett Favre and Peyton Manning both had arguably the best seasons of their careers between the ages of 38 and 40—it is extremely unusual, and even more so when you consider the peaks that Brady has crested in the past.

The really remarkable thing about Brady this season is how mistake-free his game has been. We are in an era of declining interception figures, a time where spread offense concepts have created a game of high-percentage passing and horizontal, rather than vertical, aerial attacks. Even so, Brady’s numbers are ridiculous.

The Patriots' veteran quarterback threw two interceptions all season. 98 NFL games this season featured a quarterback throwing two or more interceptions, and two different QBs threw two or more interceptions in a single game six times—again, Brady threw just two all year. He finished the season with an interception rate of 0.5 percent. That is the third-best figure of all time, and the two players tied at 0.4 percent above him threw four fewer touchdowns combined than Brady did this year, despite his four-game suspension.

It is possible to be pathologically conservative and just never put the ball in harm’s way—if you are prepared to play that way. Kansas City quarterback Alex Smith typically records the league’s lowest average-depth-of-target figure (he was at 6.9 yards this season, 35th of 36 qualifying QBs), and has the eighth-lowest interception rate in league history.

Smith though, doesn’t have the big-play upside to offset that conservatism, and consequently is seen as a limited, game-managing QB that is borderline viable for the Chiefs to remain contenders and win a Super Bowl. Tom Brady led the league in “big-time throws” this season in addition to having one of the lowest interception rates in league history.

What's more, Brady's average depth of target was almost two full yards higher than Alex Smith’s (21st in the league), and he led one of the league’s most potent offenses.

The fact that there was even a conversation about PFF's 2016 Best Player Award says a lot about the season that Atlanta's Matt Ryan put together, but even with Ryan’s four-game advantage over Brady, the difference between the two in terms of PFF grade was substantial enough to give the nod to Patriots signal caller. 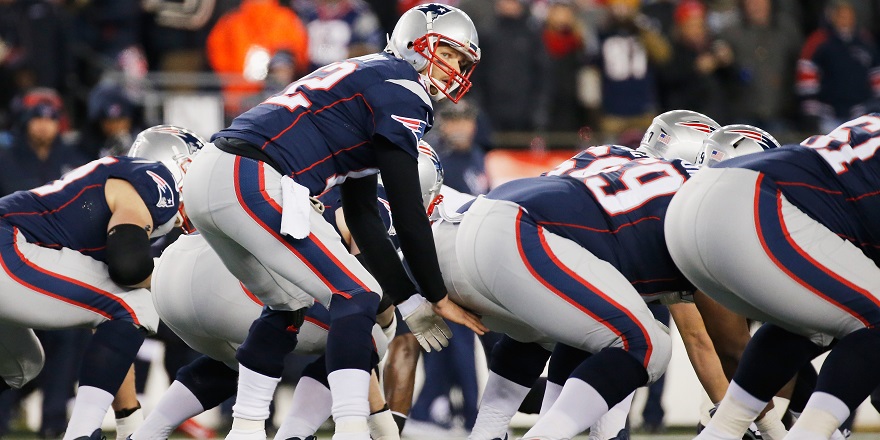 Ryan only threw seven interceptions on the season compared to 38 touchdowns, but luck sometimes plays a role in determining whether an errant pass is actually picked of, or whether it is dropped or simply deflected away. Putting the ball in dangerous spots doesn’t always result in the interception it deserves, which is one reason raw numbers don’t always match up with PFF grading; play-by-play analysis of the tape can often draw attention to instances where the result of the play misleads. Think about Steelers QB Ben Roethlisberger’s pass in the playoff game against Miami. Roethlisberger didn’t see a defensive tackle dropping into coverage and threw the ball right to him when aiming at TE Jesse James. Defensive tackles aren’t exactly used to catching footballs, however, so the defender dropped the pass, and it ended up landing in the hands of James anyway. Roethlisberger ended up with a completed pass on a play that should inarguably have been an interception.

Sometimes the break of the ball can belie what really happened on the play. Ryan’s turnover-worthy play percentage was low, but nine other QBs recorded a lower one in the 2016 regular season. The Falcons' quarterback put the ball in harm’s way 2.6 percent of the time, while Brady led the NFL at just 0.8 percent. That means Ryan put the ball in danger more than three times as often as Brady did (the thing to focus on there is Brady’s number, not Ryan’s, because it’s absurd).

Only one NFL quarterback put the ball in harm’s way less than twice as often as Brady did (Chicago's Brian Hoyer), and he only started five games. Our paragon of conservatism, Alex Smith, was at 2.9 percent, just a little worse than Ryan over the season.

At the other end of the scale, Brady led the league in big-time throw percentage, at 6.7—a full percent higher than any other QB, and more than double the figure of the bottom half of the league. He was able to make big plays without endangering the football in a way we have never seen before.

Brady ended the season completing 67.4 percent of his passes, but when you adjust for drops, spikes, passes thrown away, etc. his adjusted completion percentage jumps to 79.5 percent, which is just narrowly behind Sam Bradford’s league-leading figure of 80.9 percent. Bradford, though, recorded the league’s lowest average depth of target figure to produce that historic accuracy, while Brady was putting the ball on average almost two full yards further downfield from the line of scrimmage.

The bottom line is that, over the last decade of grading, Pro Football Focus analysts have never seen a QB play with the efficiency and effectiveness that Tom Brady has displayed this season. His 99.3 PFF grade in the 2016 regular season tops the previous best season we have seen from a QB, which was Aaron Rodgers’ obscene 2011 campaign (98.4). In fact, only three previous players have surpasses the 95.0 barrier in the PFF era (since the 2006 season).