After turning in our list of the top-25 players under 25 years old last week, we at PFF have put together our list of youngsters – specifically first- and second-year players – most likely to land themselves on the list in 2020.

[Editor’s Note: All of PFF’s advanced stats and grades are made available to our ELITE subscribers in Premium Stats 2.0. Sign up today to gain access!]

PFF’s No. 1 overall player in the 2019 NFL Draft, Murray has the highest odds of succeeding at the next level despite what the NFL perceives as “outlier” size. He turned in incredible passing grades and advanced statistical production in his one year as Oklahoma’s starting quarterback, and his rushing ability is second to none at the quarterback position. He excelled inside and outside of structure with the Sooners a year ago and is destined to do the same at the helm of Kliff Kingsbury’s high-powered offense that should fit Murray’s skill set perfectly.

Hand more than exceeded expectations in his debut NFL season with the Lions, earning an 80.8 run-defense grade and a 79.5 pass-rush grade en route to an 87.4 overall grade in 2018. The former ‘Bama standout didn’t wow as a pass-rusher in Tuscaloosa, but he seemingly turned a new leaf in the pros; his 79.5 pass-rushing grade is the highest recorded of any qualifying rookie interior defender in the PFF era (2006-18).

The next step in Chubb’s development as a pass-rusher is to learn to win without power off the outside edge. He’s proven he can bully his way through offensive tackles and long-arm his way to the quarterback, but getting to the quarterback faster and more consistently will improve his pass-rush grade significantly in Year 2 – and that starts with an effective outside rush.

Slotted just behind Murray on PFF’s final big board for the 2019 NFL Draft, Bosa had a higher pass-rush win rate as a true freshman than Brian Burns, Clelin Ferrell and Jachai Polite had this past season. He is a freakish talent with limitless potential if he can stay healthy. Pair a healthy Bosa with new 49ers edge defender Dee Ford, and San Francisco’s defense should take a considerable step forward in 2019.

Chubb’s 90.2 rushing grade in 2018 ranks third among the 90 NFL backs with 100 or more carries in their rookie season since 2006. He averaged 0.22 forced missed tackles per carry and 4.4 yards after contact per carry, ranking tied for fifth and first, respectively, among the same group of backs.

Put simply, Chubb put together one of the best single-season rookie rushing performances in the PFF era, and he played just 33 offensive snaps in the Browns’ first six games. He’s bound for a big Year 2, I’d say. 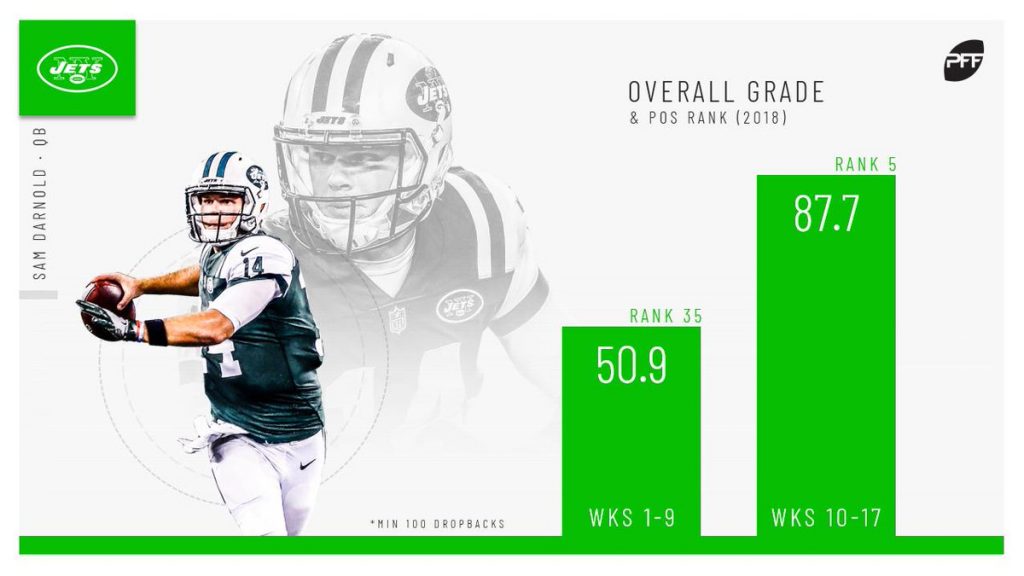 No quarterback earned a higher overall grade through the final four weeks of the 2018 season than Darnold (87.7). The arrow is pointing up for the Jets’ young signal-caller. If he can have similar success across a larger sample size in Year 2, he and the Jets could sneak into the postseason as a surprise contender in the AFC.

Wallace took the league by storm in the Bills’ final seven games of the year. Among the 69 NFL cornerbacks with 200 or more coverage snaps played in Weeks 10-17, Wallace ranked second in coverage grade (85.3) and first in yards allowed per coverage snap (0.45). And he didn’t even see the field of play until Week 10 of last year.

Bates earned an impressive 79.9 overall grade as a rookie in 2018, which is good for the eighth-best mark among qualifying rookie safeties in the PFF era (2006-18). Los Angeles Chargers’ Derwin James stole some of the limelight away from Bates this past season, but his play in Cincinnati’s defense was still spectacular. We expect him to pick up where he left off in 2019.

The highest-graded defender in all of college football last season and the highest-graded defensive tackle in the PFF College era (2014-18), Williams is a freakish athlete with great strength and hands. His production at the college level, both defending the run and rushing the passer, is absurd. He’s as close to a sure thing as you’re going to find in the NFL draft.

With Gerald McCoy released on Monday, second-year defensive interior Vea will be tasked with filling big shoes in 2019. But if his 2019 season looks anything like his last six games of the year, the Bucs will be in good shape. Vea’s 86.4 overall grade and 83.9 pass-rush grade in Weeks 12-17 ranked 10th and fifth, respectively, among the 51 interior defensive linemen with 200 or more defensive snaps played in the six-week span.