In the vast history of professional football, those who ventured too far from the status quo were often written off as unsustainable. At the same time, being on the bleeding edge of innovation has been the key to sustained success in the NFL. The main difference between the gimmicks and the sound schematic breakthroughs has always been numbers. Can I get more blockers than the defense has defenders? Can I get more receivers in an area than defenders in coverage? If the numbers are even, can my players beat their players? Sound schematic football is any scheme that helps you answer ‘yes’ to the questions above. If a scheme solely relies on the element of surprise to succeed, it’s not going to last.

The ‘wildcat’ is one of the most famous examples of a gimmick. It was based on the idea that the quarterback’s role on running plays was a waste, so removing him gave the offense an extra blocker. However, defenses quickly realized that there was no threat of the downfield pass, so they brought all the safeties in the box, which took back the numbers advantage, and the wildcat went the way of the Dodo.

It was a gimmick because it relied on the element of surprise to be successful. However, the wildcat's demise gave way to the rise of option football, a schematically sound brand of football that utilizes the quarterback to manipulate and potentially remove a defender from either a run or pass play (you can read more about why run options and run-pass options are successful here). The caveat is that it takes an athletic quarterback to make defenses respect all the options. If you have a limited pocket passer, an entire section of the playbook is off-limits.

That is unless you have someone like Taysom Hill. The former BYU quarterback, who was an undrafted free agent in 2017, couldn’t quite hack it under center in Green Bay and was cut before last season. The New Orleans Saints then picked him up and utilized his incredible athleticism (he ran a 4.44 weighing 230 pounds and had a 38.5” vertical at his pro day) on special teams. With Hill on the roster for a whole offseason, Head Coach Sean Payton had the vision to see Hill’s skill set as more than a failed dropback passer.

The New Orleans Saints team is mostly unchanged from a season ago, yet they are on pace to have the third-highest scoring offense in NFL history. Hill isn’t the only driving force behind this, but it’s incredible how much value a player who's seen all of 113 snaps can bring.

The key has been when he’s utilized. Payton often brings Hill in at quarterback in the most high-leverage situations that occur throughout a football game. Of his 35 snaps at quarterback, 24 have either come on third or fourth down or in the red zone. Options are tremendous in short yardage situations because it forces unblocked defenders to freeze for a split second to figure out who has the ball instead of attacking into the backfield. That’s glaringly obvious on the play below.

On a 3rd and 2, the unblocked defender tasked with bringing the quarterback down is standing still at the line of scrimmage as Hill pulls the ball down. All Hill needs to do is barrel straight ahead, and he’s undoubtedly going to fall forward for the first down. Plays like that are the most volatile situations for Expected Points Added (EPA is a way of measuring play success based on down/distance/field position) and having someone to execute them successfully is enormous. With Hill lined up at quarterback, the Saints have averaged 0.237 EPA per run (32 runs) and 0.517 EPA per pass (three passes). The league-wide EPA per run play is -0.09 EPA for runs and 0.05 for passes. Even an offense as explosive as the Saints has only averaged -0.01 EPA per run and 0.36 on pass plays. Put simply; Hill has been a cheat code for the Saints when they’ve needed it most.

The whole reason the wildcat fell out of favor – no respectable threat of the pass – is the same reason Hill isn’t going anywhere anytime soon. Even with an incredibly high imbalance of runs versus passes with Hill in the game, teams can’t completely ignore the threat of the pass. He may not be able to run any of the same passing plays as Drew Brees, but if you pull your safeties up to account for his running ability, Hill can still easily hit open receivers down the field. On Hill’s 44-yard pass below on a 2nd and 9 against the Vikings, you can see all 11 defenders line up within 10 yards of the line of scrimmage at the snap. 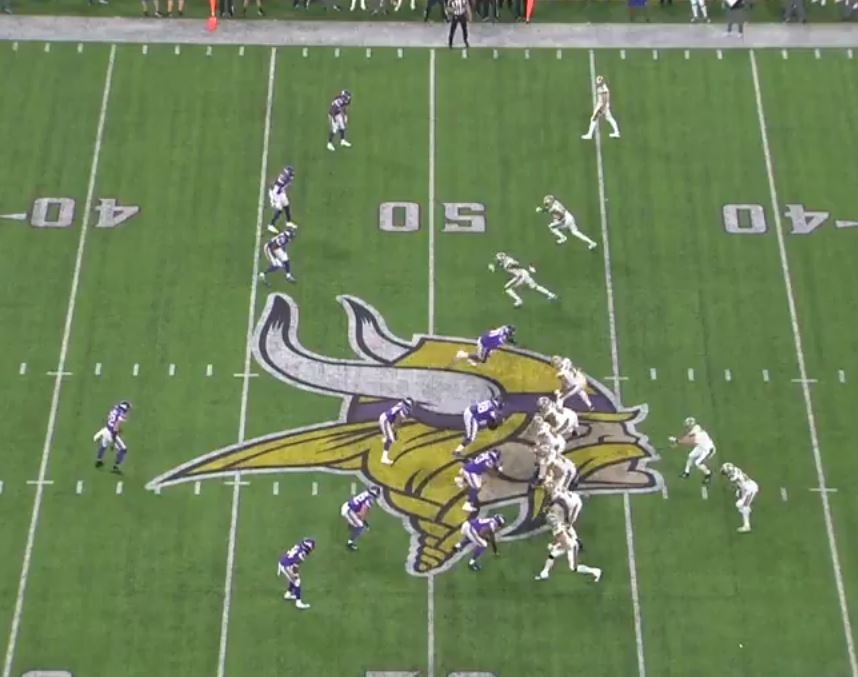 Through nothing other than the threat of the run, Sean Payton has managed to get Michael Thomas single covered by safety George Iloka with no safety help.

The result is a window the likes of which you rarely see in the NFL without a busted coverage, and Hill hits it with ease.

It’s not simply Hill’s play at quarterback that has garnered attention from opposing defenses, either, because the majority of his snaps so far this season haven’t even come under center. 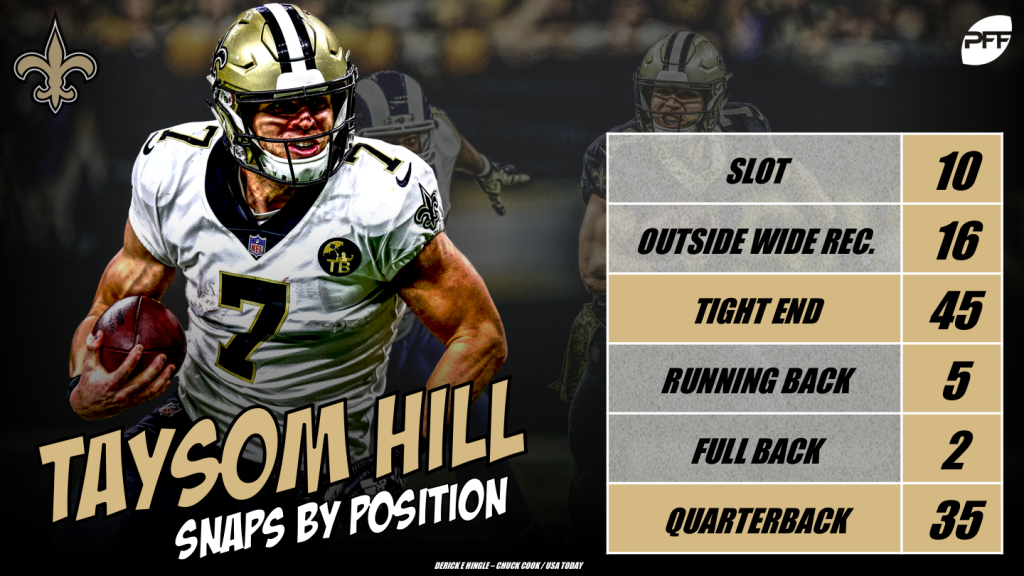 While his hands have proven fairly unimpressive so far (two of his four catchable targets have clanged off his mitts), his size/speed/throwing ability is still something that needs accounted for any time he’s on the field. And with his ability to line up elsewhere, the Saints can quickly and seamlessly break the huddle with him at quarterback, adding the element of surprise.