The unstoppable option run schemes of the Buffalo Bills

With all the hype surrounding the Cowboys rushing attack a season ago, it might be surprising to know that it was actually the Bills who had the league’s most prolific and effective run game a season ago. It might also be surprising to find out it wasn’t even close. Buffalo averaged 5.15 yards per carry on designed runs last year. The difference between the Bills and the second-place Cowboys is the same as the difference between the Cowboys and the ninth-place Steelers.

The Bills did what they did with the league’s most unique run schemes that were specifically designed to utilize LeSean McCoy and Tyrod Taylor’s skill sets to keep defenses off balance. In what is a Teaching Tape first, we’ll be highlighting a scheme where the architects of it — Greg Roman and Anthony Lynn — were let go. What they created in Buffalo, though, deserves to be analyzed.

When Chip Kelly “brought” the option to mainstream NFL back in 2013, many were quick to shout it down as a fad (I put brought in quotation marks because it had been used sparingly around the league for quite some time — Jeff Fisher of all people had Vince Young running zone-reads back in 2006). Four seasons later it’s safe to say that option football isn’t going anywhere. In 2016, 17.5 percent of all runs had an option look – either with quarterback keeper option or pass option. For a team like the Bills though, that features one of the most feared runners at the quarterback position today in Taylor, that number jumps up to 39.4 percent of all their runs a season ago. Many labeled it a “fad” five years ago and compared it to the wildcat, but those who did missed the vast schematic advantages of the play.

On top of those reasons above, there is also no downside to the play besides the fact that it must be run from the shotgun or pistol. With any sort of mobile quarterback, why not give yourself the advantages above? The Bills understood this well. While the Cowboys were grinding out tough yards with a dominant offensive line from under center, the Bills broke off huge plays like the one below purely as a result of the scheme and a fast quarterback.

Why the option was never a ‘fad'. Free yards will always be en vogue pic.twitter.com/7wZsq03yAD

From the offensive line’s perspective, this is simply an inside zone run – the most common run concept in the NFL – but the window dressing on top of it means the defense can’t play it like any other inside zone run. Look at how much the linebackers and safeties have to worry about on this play. Not only do you have the normal option look at the mesh point between the quarterback and the running back, but you also have a wide receiver coming in motion to be the pitch player on a triple option and a tight end flowing backside on the zone run. The freeze frame below shows just how much the defenders have to process. 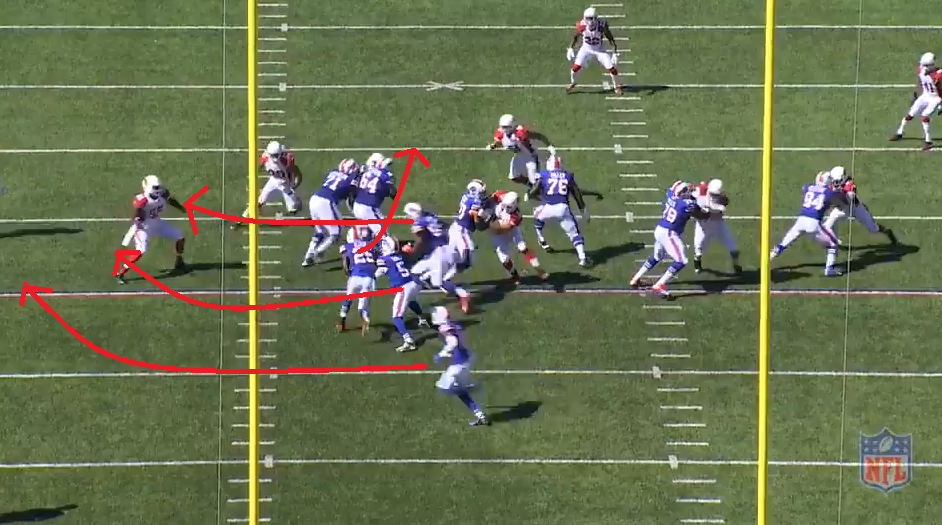 From there all it takes is one defender not executing his assignment perfectly and Tyrod has tons of space to roll.

While taking advantage of blown contain is great, it’s not nearly as sustainable as the other benefits option runs provide. By far the biggest advantage of any option run is the ability to take away a defender without actually blocking him. In the run below the Jets are technically gapped out, meaning they have one defender for every gap at the line of scrimmage (seven in the box and seven gaps).

Or not having to block them altogether pic.twitter.com/1OUrXCOelu

Once Tyrod puts two hands into the running back’s stomach though, an “extra” gap is created. David Harris at left outside linebacker can’t attack LeSean McCoy for fear of the quarterback pulling. While this is certainly questionable play design from a defensive standpoint, if this same play was run from under center without an option look it would likely go for little to no yardage.

The Bills do a great job with the traditional zone read, but what makes them special is that they’ll throw an option look into just about any run concept. One of their most effective is optioning off of pin and pull. This run from Mike Gillislee against the Dolphins is exactly how it’s drawn up on a chalk board and you’ll have a hard time finding a bigger running lane at the NFL level.

It’s redundant to say at this point, but the option once again helps create that huge lane. The playside linebackers both read the quick flow of the guard pulling out to the edge. The backside linebacker though is stuck in mud as he waits to see who has the ball. This give left tackle Cordy Glenn ample time to get in position for an easy cutoff.

At this point, it’s unclear whether new Buffalo offensive coordinator Rick Dennison will hold over any of the concepts that led to the Bills averaging more than five yards per carry on designed runs a season ago. It was one of the most creative and varied schemes that kept opposing defenses guessing. With as dynamic a duo as McCoy and Taylor are in the backfield, the possibilities to be creative schematically are endless.